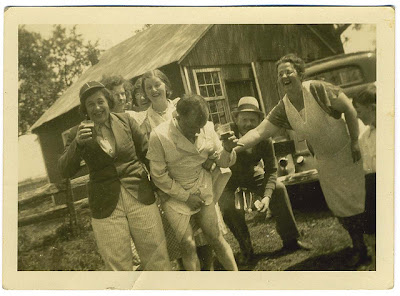 Nothing Fits
By American Kabuki

Its a strange age.

Growth comes unexpectedly.  Suddenly.  Go to bed and suddenly your 6 inches longer in the morning.

What was once familiar, even cherished, has holes, and is uncomfortable to wear.  My limbs feel exposed and everything seems too small for my being.

Old patterns vanish.  Both the ones I thought were important, and the ones that I never wanted but were very hard to break free from. The rate at which this happened is astonishing.  They simply hold no resonance for me.

The future called me, or was it the ever present NOW?  "Do you want to have some fun?"  I replied, "YES!" Sometimes  fun is a rocket sled into the future.  I had plans. Strategies. But it all came so fast and planning in serial time was pointless.  And I all could do was be of service to Eternal Essence, and in doing that, I found ME.

In my closet hides a bookcase.  There are books on computers, algorithms, logic, and patterns of object oriented software design. They gather dust.  Religious and philosophy books smell moldy from 12 years in the moist beach air. Haven't looked at the Quran in 10 years. The book on Buddha I got from a Honolulu hotel dresser drawer, looks nearly new.  My expensive Oxford wide margin rice paper Bible seems like an artifact from someone's else's life, especially the margin notes from college written with a Koh-i-noor india ink pen in such tiny letters.  I should have written those in pencil, so they could be removed.  Other's peoples bread crumbs of what they wanted me to see and what they wanted me to avoid within the texts.  Took me a while to learn that text without context is pretext.

It was all "Secret knowledge" and I was "converted" and they were "unconverted".   It was no knowledge at all but an opinion in  a place and time meant to keep me separate from humanity at large.  Spiritual quarantine.  A cast iron manhole cover snugly fitted over the dogma buried deep in my being and cast with letters "Christian" so all would know from which source the steam of being emerged emerged beneath their feet.  But it was me that chose to hide below humanity, to "not be of this world" so I sought refuge underground.  I used to polish those words, make sure they never got rusty.   Other's had more specific labels on their manhole covers, Catholic, Baptist, Mormon, Jew, Hindu, Muslim, Buddhist, Atheist.

I choose the word HUMAN now, absent limits.  I will no longer be a bonsai tree of the larger me that wants to grow and reach Heaven with my hands and feel the core of Gaia with my feet.  My roots will not be pruned and my limbs will no longer be contorted to fit another's idea of beauty. I AM wonderfully made.

There is no "ONLY HUMAN" or "JUST HUMAN".  We are all wonderfully made with the full repertoire of emotions from which Creation springs.  We are joyfully and wonderfully Human.  An awakening human as Eternal Essence Embodied.  Its spring time!  Grow baby Grow!
Posted by D ... Breaking The Silence at 20:48