What a list!!!  The writers of Consciously Connecting have put together this article with extensive links to mainstream news outlining each of these arrests.


...And this article doesn't include the LIBOR arrests that are about to rock the financial world.


.......What was that I said yesterday about the truth trickling out into the main stream media?  The Truth is getting out faster and faster my friends.  The sleeping masses are being prepared for the crashing fall of the Cabal.

Out of curiosity I Googled bankers, brokers and inside traders with arrested and July. Here’s the results:
Bankers and Brokers and Inside Traders Arrested, Oh My! 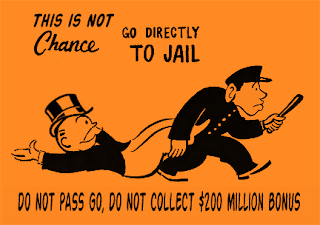 Unbelievable!  These almost sound like fiction …
A Chase Customer with Alzheimer’s Accuses Bank of Stealing Over $100,000 - BATON ROUGE, La.) — A Louisiana man with Alzheimer’s disease has filed a lawsuit against JPMorgan Chase, claiming an employee stole over $100,000 from his accounts and the bank refuses to give it back.
BofA Allegedly Sends False Statements To Paralyzed Man After Repeatedly Threatening Eviction - A quadriplegic man in Oregon has been battling banks to keep his home since 2003. And just when he thought the fight was finally over, Bank of America messed up again. Robert Galanida, a 41-year-old man living in Oregon, who is paralyzed from the shoulders down, received the first bank statement for his loan modification due January first — a deal two-and-a-half years in the making, The Oregonian reports. The problem? He received a second statement asking for a different amount but also due the first of the year. Neither statement “agrees with the terms of the modification agreement,” his lawyer wrote to Bank of America shortly after receiving the erroneous documents.
John, Anna Canaday Claim JPMorgan Chase Called Them 75 Times A Week - JPMorgan Chase allegedly called John and Anna Canaday 15 to 75 times a week between 2009 and 2012, claiming they were at risk of losing their home to foreclosure, according to a lawsuit filed by the couple earlier this month. The Canadays, both over 65 years old, claim they aren’t late on their mortgage payments (h/t: Courthouse News).
Bank officials molest girl at Kolkata apartment, arrested - KOLKATA: Two young officials of a nationalized bank have been arrested for molesting and passing lewd comments at a 10-year-old girl and her mother at an apartment in Garfa in the wee hours of Monday.
Brooklyn Rabbi Sentenced to Almost 4 Years for Money Laundering Conspiracy - (Source: FBI) - TRENTON, NJ—Mordchai Fish, the principal rabbi of Congregation Sheves Achim in Brooklyn, New York, was sentenced today to 46 months in prison for conspiring to launder approximately $900,000 he believed was criminal proceeds, U.S. Attorney Paul J. Fishman announced. Fish, 59, of Brooklyn, New York, previously pleaded guilty before U.S. District Judge Joel A. Pisano to an information charging him with money laundering conspiracy. Fish admitted that he met with Solomon Dwek, an individual he now knows was a cooperating witness with the United States. For a fee of approximately 10 percent, Fish agreed to launder and conceal Dwek’s funds through a series of purported charities, also known as “gemachs,” which Fish controlled or to which he had access. Fish admitted that prior to laundering Dwek’s funds, Dwek repeatedly told him the money was the proceeds of illegal activity—including bank fraud, trafficking in counterfeit goods, and bankruptcy fraud.

Click HERE to read the rest of this article on Consciously Connecting
Posted by D ... Breaking The Silence at 12:03 1 comment: