Well, after a week to recuperate from the last shin dig, the Sun is back to partying again.

In the past 2 days the Sun has popped off  4 more M Class flares. We currently have a 70% chance of more M Class and 15% chance of X Class flares.  I am still waiting for a confirmation of incoming CME from the flares from the last two days, and will update when that information is available.  Sunspot 1618, which threw the flare party for the past two days, is now directly earth facing and capable of sending off major flares and Earth directed CMEs.  I will be keeping a close watch on this. 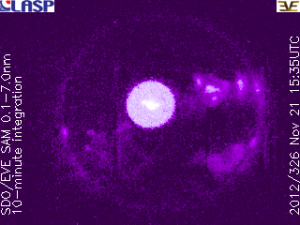 A Type II and IV Radio Emissions were reported. Type IV Radio Emissions occur in association with major eruptions on the Sun and are typically associated with strong Coronal Mass Ejections (CME) and solar radiation storms.
NOAA/SWPC forecasters estimated there was 70% chance of an M-class event today, and 15% chance of an X-class event.
Region 1618 is now ten times wider than Earth. It’s continually growing and still has Beta-Gammamagnetic configuration capable of producing strong solar flares. It is now located in the center of the solar disk, in perfect position for Earth directed Coronal Mass Ejections (CME).