As Transpicuous News went on the air last night on TONE and CCN, the news was already coming in that the Euro zone was in bigger trouble than was "forecast" by the talking heads in the Main Stream Media.   I have posted a couple of articles below that are well worth noting for those interested in the financial ramifications of Russia's current bid to build concrete foundations of the Eurasian Economic Union, including enticing European Union countries to jump on board the Russian fast track.

... Throw China into the mix and things could definitely get really interesting, really fast.


Bidless Euro Crashes To Level Not Seen Since March 2006

inShare6
Having closed the Friday session less than 1 pip above the hugely important 1.2000 level below which there lay many stops, following this weekend's news onslaught which seemed like a deja vu of the newsflow from the fall of 2011, where the main catalyst was the Reuters report that Germany is preparing to let Greece go once and for all (with the subsequent attempts at retraction barely noticed), or maybe just because someone wanted to price in a little more of the more than fully priced in by now ECB QE - which very well may not happen - the moment the EURUSD opened for trading it took out not only the critical 1.2000 stops, but within milliseconds the Euro found itself bidless and crashed to a low of 1.1864, promptly taking out the lows set in May 2010 when the first Greek bailout took place, and tumbled to a level not seen since March of 2006!


Russia's "Startling" Proposal To Europe: Dump The US, Join The Eurasian Economic Union

inShare45
Slowly but surely Europe is figuring out that as a result of the western economic and financial blockade of Russian, it is Europe itself that is suffering the most. And while Germany was first to acknowledge this late in 2014 when its economy swooned and is now on the verge of a recession, now others are catching on. Case in point: the former head of the European Commission, and Italy’s former Prime Minister, Romano Prodi who told Messaggero newspaper that the "weaker Russian economy is extremely unprofitable for Italy."
The other details from Prodi's statement:


Lowered prices in the international energy markets have positive aspects for the Italian consumers, who pay less for the fuel, but the effect will be only short-term. In the long-term however the weaker economic situation in countries producing energy resources, caused by lower oil and gas prices, mostly in Russia, is extremely unprofitable for Italy, he said.

“The lowering of the oil and gas prices in combination with the sanctions, pushed by the Ukrainian crisis, will drop the Russian GPD by five percent per annum, and thus it will cause cutting of the Italian export by about 50%,” Prodi said.

“Setting aside the uselessness or imminence of the sanctions, one should highlight a clear skew: regardless of the rouble rate against dollar, which is lower by almost a half, the American export to Russia is growing, while the export from Europe is shrinking.”

In other words, just as slowly, the world is starting to grasp the bottom line: it is not the financial exposure to Russia, or the threat of financial contagion should Russia suffer a major recession or worse: it is something far simpler that will lead to the biggest harm for Europe's countries. The lack of trade. Because while central banks can monetize everything, leading to an unprecedented asset bubble which if only for the time being boosts investor and consumer confidence, they can't print trade - that all important driver of growth in a globalized world long before central banks were set to monetize over $1 trillion in bonds each and every year to mask the fact that the world is deep in a global depression.
Which is why we read the following report written in yesterday's Deutsche Wirtschafts Nachrichten with great interest because it goes right to the bottom line. In it Russia has a not so modest proposal to Europe: dump trade with the US, whose call for Russian "costs" has cost you another year of declining economic growth, and instead join the Eurasian Economic Union! From the source:


Russia has presented a startling proposal to overcome the tensions with the EU: The EU should renounce the free trade agreement with the United States TTIP and enter into a partnership with the newly established Eurasian Economic Union instead. A free trade zone with the neighbors would make more sense than a deal with the US.

It surely would, but then how will Europe feign outrage when the NSA is found to have spied yet again on its "closest trading partners?" Some more on Russia's proposal from EUobserver:


Vladimir Chizhov told EUobserver: “Our idea is to start official contacts between the EU and the EAEU as soon as possible. [German] chancellor Angela Merkel talked about this not long ago. The EU sanctions [on Russia] are not a hindrance”.

“I think that common sense advises us to explore the possibility of establishing a common economic space in the Eurasian region, including the focus countries of the Eastern Partnership [an EU policy on closer ties with Armenia, Azerbaijan, Belarus, Georgia, Moldova, and Ukraine]".

He described the new Russia-led bloc as a better partner for the EU than the US, with a dig at health standards in the US food industry.

“Do you believe it is wise to spend so much political energy on a free trade zone with the USA while you have more natural partners at your side, closer to home? We don’t even chlorinate our chickens”, the ambassador said.

The treaty establishing the Eurasian Union entered into life on Thursday (1 January).

It includes Armenia, Belarus, Kazakhstan, and Russia, with Kyrgyzstan to join in May.

It has free movement of workers and a single market for construction, retail, and tourism. Over the next 10 years, it aims to create a court in Minsk, a financial regulator in Astana and, possibly, to open Eurasian Economic Commission offices in Astana, Bishkek, Minsk, and Yerevan.

It also aims to launch free movement of capital, goods, and services, and to extend its single market to 40 other sectors, with pharmaceuticals next in line in 2016.

And as a reminder: The Eurasian Economic Union, a trade bloc of former Soviet states, expanded to four nations Friday when Armenia formally joined, a day after the union between Russia, Belarus and Kazakhstan began.

So the ball is in your court, Europe: will it be a triple-dip (and soon thereafter quadruple: see Japan) recession as your Goldman-controlled central bank plunders ever more of what little is left of middle-class wealth with promises that this year - for real - is when it all turns around, or will Europe acknowledge it has had enough and shifts its strategic, and trade, focus from west (speaking of the TTIP, Germany's agriculture minister just said "We can't protect every sausage" referring to the TTIP) to east?
Considering just whose interests are represented by the unelected bureaucrats in Brussels, we won't be holding our breath.

Move against the United States: Russia advises EU to phase out the TTIP

German Economic News | Published: 03/01/15 01:22 clock | 255 Comments
Russia has presented a startling proposal to overcome the tensions with the EU: The EU should renounce the free trade agreement with the United States TTIP and enter into a partnership with the newly established Eurasian Economic Union instead. A free trade zone with the neighbors would make more sense than a deal with the US. 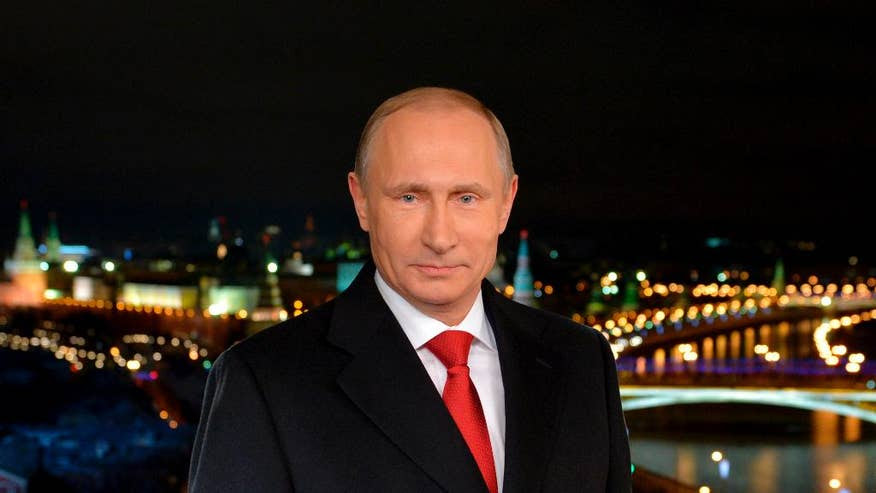 In this undated photo released by Kremlin Press service via RIA Novosti, Russian President Vladimir Putin looks on during a recording of his annual televised New Year's message in the Kremlin in Moscow, Russia, Wednesday, Jan. 31, 2014, with the Kremlin in the background. (AP Photo/RIA Novosti, Alexei Druzhinin, Presidential Press Service) (The Associated Press)
MOSCOW –  The Eurasian Economic Union, a trade bloc of former Soviet states, expanded to four nations Friday when Armenia formally joined, a day after the union between Russia, Belarus and Kazakhstan began. The Russian-dominated bloc has been politically controversial and its early days are being overshadowed by the sharp deterioration of Russia's economy in recent months.
A look at the bloc, its implications and its prospects:
WHY CREATE A UNION?
The union aims to create a single integrated market for the free movement of goods and services over a total population of more than 180 million people, something like the 28-nation European Union. Unlike the EU, the bloc does not have a single currency, but is expected to try to establish one at some point. The former Soviet republic of Kyrgyzstan is expected to join by mid-year and Tajikistan is also a prospective member.
Moscow pushed hard for Ukraine to join, hoping its 45 million people and large-scale heavy industries would be a key piece of the trading bloc. But many Ukrainians detested the idea, seeing it as Russian President Vladimir Putin's attempt to reconstitute the Soviet Union and exert more influence on their country. The issue was key to inciting protests that eventually drove Ukraine's Russia-friendly President Viktor Yanukovych from office in February. Ukraine has since signed an agreement to deepen ties with the EU.
Although the EEU is nominally only a trade bloc, its economic heft could be a "soft power" political lever for Moscow.