The alternative media is Buzzing over the "murder suicide" of film maker David Crowley and his wife and young daughter.  Every aspect of the "official" reports are highly questionable, even without taking into consideration the very controversial movie that David was filming:  Grey State.

I have not had time to watch the rough cut, and I was also sent a copy of the final video (which I can't find right now) that I will post later on as soon as I can find it again.

While I can't verify the content of the movie (yet), I strongly suspect that this may be worth saving. 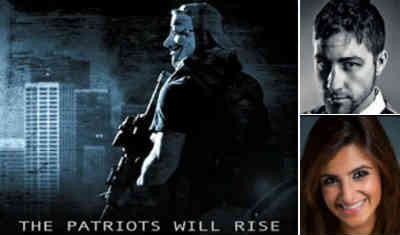 Upon hearing the news that filmmaker David Crowley of the Gray State project was found dead in an apparent murder/suicide along with his wife and 5-year old daughter, I immediately recalled our private conversation of October 3, 2012. It was about three hours before airtime when we first spoke, candidly and without the restrictions imposed by a program clock.
We talked about his vision for the film Gray State, a depiction of future events in a post-collapse America he recently launched. Mr. Crowley was very articulate and outlined his vision well. It was obvious that he had big plans for his project, and even bigger plans for his future. I recalled him being very detail oriented, and knew that creating this movie was not going to be a small or short project.
In addition to the film project, we discussed other matters – personal matters. He spoke of his wife and daughter with the pride of a loving husband and father. He spoke of past events that brought him to this point in his life. He spoke of what he saw as a country in dire trouble from a ruling elite who were bent on destruction of our country and our way of life. He was not, however, fanatical about what he saw taking place. He was reserved, measured and practical.
It was during our conversation that I chided him a bit about the dangers of his undertaking, that it might not be a popular move to appear on our radio show in the run-up to the 2012 elections. He chuckled and said that he was glad to have any opportunity, no matter how big or small, to expose the machinations of the corrupt and the complicit who were destroying the country in which his daughter would grow up.
It was during the latter part of our conversation that he made the statement that is most unsettling and troubling to me. It was six months after the death of Andrew Breitbart and five months before the “accident” that claimed the life of Michael Hastings. He ominously confided that he had no intentions of committing suicide or otherwise becoming a statistic as he had so much to live for. “I’m not prone to suicide,” he told me.
Although I lost touch of late, the narrative being constructed in the public about David Crowley is the complete opposite of the man I spoke with, joked with, and subsequently interviewed. I understand that people change, things happen, and people will surprise you. I’ve seen it many times. I get it.
What I don’t understand is the public’s acquiescence or resignation to the official narrative without question, especially considering the people whom we’ve lost to questionable, if not outright strange circumstances. There is something very wrong here. The death of David Crowley, his wife and daughter is more than a tragedy. It seems to fit a disturbing pattern.
We need the complete truth about what happened, and not accept anything less. Although his death and the murder of his five year-old daughter and 28 year-old wife could have been by his hand, I’m not buying it. Others aren’t either.
A “Justice for David Crowley of Gray State” page has just been launched on Facebook. They want answers. So do I.
http://canadafreepress.com/index.php/article/69124