Let's forget about the actual False Flag Bullshit Lies and Cabal Agenda's behind the so-called "terror attacks" in Paris France last week.  Let's just put that aspect on the back burner for a short moment.  I would like to draw your attention to the absolute hypocrisy of this entire Charlie Hebdo, "satire" Cartoonist ridiculousness.

For all the lamenting of the public about the "deaths" (in quotation marks because I'm not convinced that there were ANY deaths) of the staff of the magazine Charlie Hebdo, there are very few people looking at the background and content of this magazine.

First off, as I commented on the Transpicuous News special update about the False Flag in France, it was announced by the lawyer for Charlie Hebdo that they will print 1 million copies of the next addition:

The 1 million print-run figure came from Richard Malka, a lawyer for Charlie Hebdo, in an interview with Les Echoes. The magazine typically has a print run of 60,000 and a circulation of about 30,000.

My very first question upon hearing this was: "why is their lawyer announcing this?" - immediately my internal crapometer went  off.  Then the following article came out this morning.

I will use a highlighter to draw attention to a few very interesting points in the next two articles. 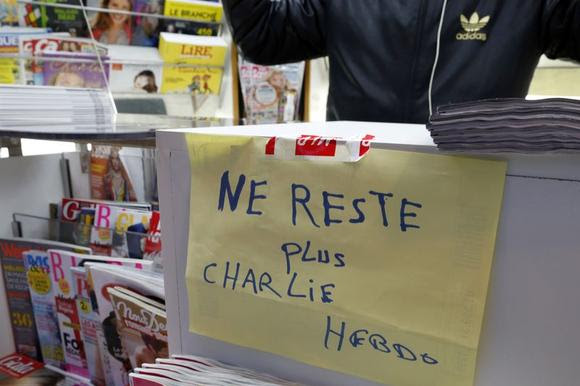 A handwritten sign at a newsstand, which reads ''No more Charlie Hebdo'', is displayed after it sold out the limited stock of the satirical newspaper in Paris January 14, 2015.

Credit: Reuters/John Schults
(Reuters) - The first edition of Charlie Hebdo published after the deadly attacks by Islamist gunmen sold out within minutes at newspaper kiosks around France on Wednesday, with people queuing up to buy copies to support the satirical weekly.
"I've never bought it before, it's not quite my political stripes, but it's important for me to buy it today and support freedom of expression," said David Sullo, standing at the end of a queue of two dozen people at a kiosk in central Paris.
A print run of up to three million copies has been set for what has been called "the survivors' edition", dwarfing the usual 60,000 run. But still, many outlets were selling out fast.
"It's important for me to buy it and show solidarity by doing so, and not only by marching," said 42-year old Laurent in the same queue, adding he had no guarantee he would get a copy because he had not reserved one the day before.
A few blocks away, by Jules Joffrin metro station in northern Paris, one newspaper seller said people were already waiting outside her shop when she opened at 6:00 am (0500 GMT). "I had 10 copies - they were sold immediately," she said.
The newsagent at Gare du Nord rail station said it opened at 5:15 am local instead of the usual 6:00, and its 200 copies sold out in less than 15 minutes.
Seventeen people died in Paris in three days of violence that began with the attack by two Islamist gunmen on the offices of Charlie Hebdo on Jan. 7 - in which 12 people were killed - and ended with a siege at a kosher supermarket two days later.
At least 3.7 million marched through Paris on Sunday  to honour the memory of the journalists, police officers and supermarket customers who had died. (WHOA!!!  I'm going to have to jump in here on this point:  at 2pm Sunday it was announced that 700 thousand were in attendance, then that evening they said 1 million, and the news the next day was that there was 3 million people there, and now they are saying 3.7 million?!?  Seriously?  I'd like to know who was the auditing firm that actually did this head count please)
The front page of Charlie Hebdo's Jan. 14 edition shows a cartoon of a tearful Mohammad with a sign "Je suis Charlie" (I am Charlie) below the headline: "Tout est pardonné" (All is forgiven).
"I wrote 'all is forgiven' and I cried," Renald "Luz" Luzier, who created the image, told a news conference on Tuesday at the weekly's temporary office at left-wing daily Liberation.
"This is our front page ... it's not the one the terrorists wanted us to draw," he said. "I'm not worried at all ... I trust people's intelligence, the intelligence of humour."
GRAND MUFTI WARNING
Inside the edition, the weekly's usual irreverent humour was on display. One cartoon shows jihadists saying: "We shouldn't touch Charlie people ... otherwise they will look like martyrs and, once in heaven, these bastards will steal our virgins."
"What makes us laugh most is that the bells of Notre-Dame rang in our honour," the newspaper, which emerged from the 1968 freedom movement and has long mocked all religions and pillars of the establishment, wrote in an editorial.
All proceeds from the sale of this week's edition will go directly to Charlie Hebdo, in a windfall for a publication that had been struggling financially, after distributors decided to waive their cut. The cover price was three euros ($4). A call for donations has also been aired on national media.
In Charenton on the eastern edge of Paris, queues formed in the early morning darkness at the normally quiet newspaper stand near the metro, until people got closer to a notice by the door saying "Charlie Hebdo: none left".
The newspaper seller said he hoped to get more copies on Thursday but was refusing to take reservations.
Digital versions will be posted in English, Spanish and Arabic, while print editions in Italian and Turkish will also appear.
At a news briefing on Tuesday, U.S. State Department spokeswoman Marie Harf said: "We absolutely support the right of Charlie Hebdo to publish things like this. Again, that's what happens in a democracy. Period."
However Egypt's Grand Mufti warned the newspaper against publishing a new Mohammad caricature, saying it was a racist act that would incite hatred and upset Muslims around the world.
($1 = 0.8473 euros)
(Reporting by Ingrid Melander, Emmanuel Jarry and Brian Love; Valerie Parent; Writing by Ingrid Melander; editing by Mark John and Pravin Char)

For those who may not get this point of exactly WHY muslim people around the world find these cartoons completely appalling and upsetting, and like to point out that this magazine also makes fun of the catholic church as well:  In Islam it is completely FORBIDDEN to make a picture, statue or ANY physical representation of God/Allah or their prophet Mohammed. Beyond the insulting words, it is the fact that they are DRAWING a picture of something that is perceived by the Islamic religion to be forbidden- it amounts to sacrilege.  While the catholics might take offense to the satirical nature of the cartoons aimed at their religion, they do not have a complete ban against images of Jesus or God.  Even the irreverent and somewhat shocking cartoon show South Park learned this lesson very clearly.

French Culture and Communication Minister Christine Albanel expressed support on Monday to the director of a satirical political magazine who fired a cartoonist -columnist for writing anti-Semitic remarks towards the son of French president Nicolas Sarkozy.

Earlier this month, 79-year-old caricaturist Siné suggested in the weekly Charlie Hebdo magazine that 21-year-old Jean Sarkozy, who became engaged with Jessica Sebaoun-Darty, the Jewish heiress of a family which owns the Darty group, the largest consumer electronics chain in France, intended to convert to Judaism before the marriage.

The caricaturist suggested also that the President's son was “an opportunist who would go far in life."

In the Charlie Hebdo column, which took the form of a "talking" cartoon in the cartoonist's own hand-writing, Siné wrote: "Jean Sarkozy, worthy son of his father and already a UMP councillor, emerged almost to applause after his court case for not stopping after an accident on his scooter."

"The prosecutor even asked for him to be cleared. You have to remember that the plaintiff was an Arab. And that's not all. He has just said that he wants to convert to Judaism before marrying his fiancée, who is Jewish, and heir of the founders of Darty. He will go far in life, this boy!"

Jean Sarkozy had appeared in court last month, accused of running his scooter into the back of a car and driving away without giving his name.

The Sarkozy and Darty families threatened to sue the magazine for anti-Semitism.

Philippe Val, the magazine's director, who criticised the cartoon/column as "peddling a falsehood," asked the cartoonist to retract. He reportedly replied:"I would rather cut off my balls."

Siné was then fired by Val on the ground that the column had "anti-semitic undertones"
and could be interpreted as making a link between conversion to Judaism and social success.

“This is neither acceptable nor defendable before a court,” Val stressed.

The International League Against Racism and Anti-semitism (LICRA) as well as CRIF, the umbrella group of French Jewish Organizations, expressed their support to the director decision.

Culture Minister Christine Albanel declared that the caricaturist's cartoon and remarks "echoed clichés and cartoons from another time that one would like to see disappear once for all.”

The cartoonist brought a legal action for defamation against Charlie Hebdo and, "anyone else who suggests that I am an anti-Semite and a shit.”

The staff and contributors of the magazine appeared to be split between those who support the editor, Philippe Val, and those who accuse him of selling out to the "Sarkozy clan."

Jean Sarkozy is the son of President Sarkozy and his Corsican-born first wife, Marie-Dominique Culioli. He has an older brother, Pierre, 23.
Monday, August 04, 2008.

.... They certainly made a tidy profit from all this, didn't they?  $4.00 times 3 million copies that sold out in just over two hours?  Charlie Hebdo just made $12 million dollars this morning. Oh, plus all those donations.  Not bad for a rag that was on the verge of going out of business just two weeks ago, eh?