YOO-HOO, ANTIQUE MEDIA: You figured out yet that everything the White House told you about Benghazi was a lie?

Stephen Hayes does the rundown, which can be summarized as follows: 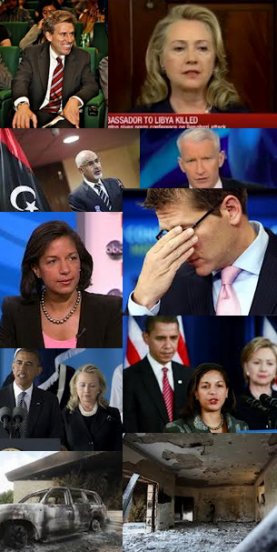 • Ambassador Susan Rice also lied about Stevens' security, stating that " two of the four Americans who were killed were there providing security."

• White House Press Secretary Jay Carney lied that the attacks had nothing to do with the anniversary of 9/11.

• Secretary of State Hillary Clinton lied as well, indicating that an anti-Islamic film was the cause of the non-existent protests in Benghazi

• Hillary's State Department lied; first downplaying the possibility of 9/11 terror attacks and then scrubbing its website to remove its horrific mistake

• Clinton also lied to Senate Republicans, claiming they did not have details of the terror attacks when they were instead revealing those details to The New York Times

The facts: There was no protest in Benghazi. There was only a planned, premeditated terror attack on the U.S. consulate. The attack was initiated on the anniversary of 9/11. And two heroic ex-Navy SEALs -- who were not part of Ambassador Stevens' security team -- jumped into the fray and died protecting him.

This is a scandal. And even Sixties media is going to have to cover it.