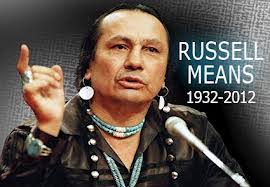 Indigenous people and human rights activists around the world mourn the loss of an amazing man. Russell Means spent the vast majority of his 72 years on this earth fighting for justice and the Rights of America's First Nations Indian peoples. The LA Times called him the most famous American Indian since Sitting Bull and Crazy Horse.


Russell Means has lived a life like few others in this century - revered for his selfless accomplishments and remarkable bravery. He was born into a society and guided by way of life that gently denies the self in order to promote the survival and betterment of family and community. His culture is driven by tradition, which at once links the past to the present.
The L.A. Times has called him the most famous American Indian since Sitting Bull and Crazy Horse. His indomitable sense of pride and leadership has become embedded in our national character. Today, his path has brought him to Hollywood, thus enabling him to use different means to communicate his vital truths. Through the power of media, his vision is to create peaceful and positive images celebrating the magic and mystery of his American Indian heritage. In contemplating the fundamental issues about the world in which we live, he is committed to educating all people about our most crucial battle - the preservation of the earth.


Means was strongly involved in the creation of the Republic of Lakota, which declared it's self a sovereign nation in December of 2007.

In December of 2007, the Republic of Lakotah was formed by the formal withdrawal from its Treaties of 1851 and 1868. This was the latest step in the longest running legal battle in the history of the World.
This was not a “cessation” from the United States, but a completely lawful “unilateral withdrawal” from the Treaties as permitted under the 1969 Vienna Convention on the Law of Treaties, of which, the United States is a signatory.
The purpose of the Republic of Lakotah is to follow the Instructions given by the Elders at the first International Indian Treaty Council in 1974. The Council held a “Western Hemisphere” Conference at Wakpala on the Standing Rock Sioux Indian Reservation. Over 5000 delegates of 97 Indigenous Peoples from the Americas gathered. The “manifesto” that was created on that occasion supports the rights of all Indigenous Peoples to live free and take whatever actions are necessary to uphold our sovereignty. This was the largest gathering of Indian People in the 20th Century where Indians paid their own way.
It was here that the Declaration of Continuing Independence was created. The conference was attended by numerous elders, including Chief Frank Fools Crow, pictured left. These were not your ordinary elders; most of them were born in the 1800’s to parents who had been born free, they had never been to schools. The majority spoke no English, and the rest spoke broken English. Russell Means was made a permanent trustee of the International Indian Treaty Council by the elders and the conference.
These Elders Gave the Conference and the Newly Formed International Treaty Council Two Mandates:
1. The first mandate was to become recognized by the International Communities. On September 2007, when the United Nations passed the Declaration of Indigenous Rights, that mandate was fulfilled.
2. We were to remember the words of Noble Red Man (Matthew King, pictured below), “We must always remember that we were once a free People, if we don’t, we shall cease to be Lakotah.” This second mandate is to return to our original status as free and Independent Nations. On December 17, 2007, the Lakotah Freedom Delegation presented to the Department of State of the United States of America, we are unilaterally withdrawing from all Treaties and Agreements entered into between the United States of America and Lakotah.
Leading up to the 2007 Unilateral Treaty Withdrawal, Russell traveled all over the five state area meeting with key people over a seven month period. Now in his seventieth winter, he is working on achieving better conditions for the Indian people for over forty years. Russell was appointed by the conference and the elders as a permanent trustee of the Indian Treaty Council.

By DIRK LAMMERS and KRISTI EATON | Associated Press – 18 hrs ago