Edited 15 minutes after publishing to add:

WEll well well..... not THAT is interesting to say the least!!  So there I was, posting this article out to Facebook, and when I clicked post, the Picture/Description that came up, linked to www.deagle.com was: 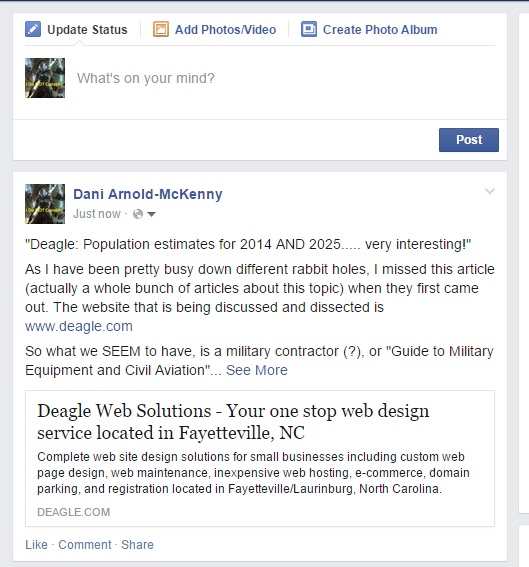 As I have been pretty busy down different rabbit holes, I missed this article (actually a whole bunch of articles about this topic) when they first came out.   The website that is being discussed and dissected is  www.deagle.com

So what we SEEM to have, is a military contractor (?), or  "Guide to Military Equipment and Civil Aviation"
that seemingly is listing a shitload of data about the military holdings, purchasing, orders and equipment, for all countries globally.  What is interesting is the country listings, that give all of the pertinent data for that country, including population, GDP, population density, annual budget, military budget,  etc....   And what is even more interesting is that they have two lists for all of this information- one for 2014, and the other list is for 2025.   The focus of all the attention the site is getting is on the population listings for countries for 2014, that then show huge changes (or not) for the projected population in 2025.  Radical drops in population is the prime focus.  I'll return to that in a minute.

Now, the problem is of course, verifying the "legitimacy" of the information give on this site.  They list their sources as:  Sources: US Department of Defence, Department of State, CIA, World Bank and European Union.

Is it true?  no idea.  I personally haven't been able to (albeit, in a quick search) find anything official.... but like I said, I haven't done a really in depth search.

But this is interesting:  http://www.whois.com/whois/deagel.com

Now to look at the information listed for certain countries.  http://www.deagel.com/country/

First up:  USA, Canada, Australia, UK and Germany.   Note the difference in the projected populations between 2014 and 2025: 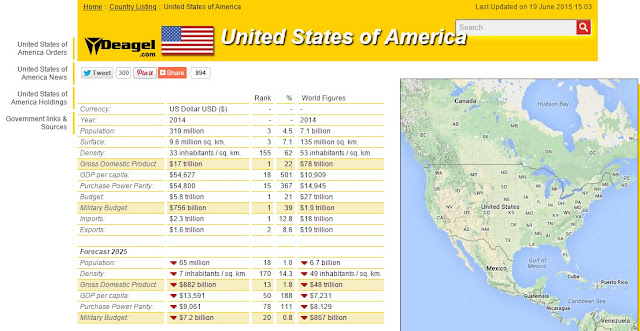 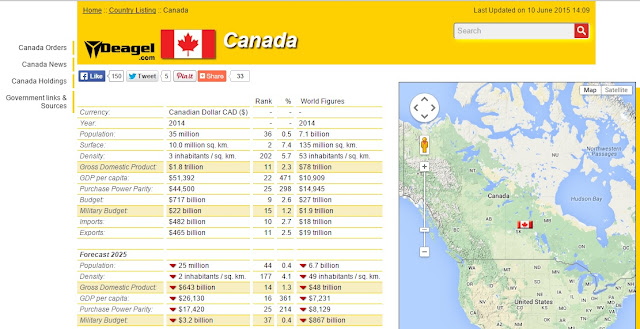 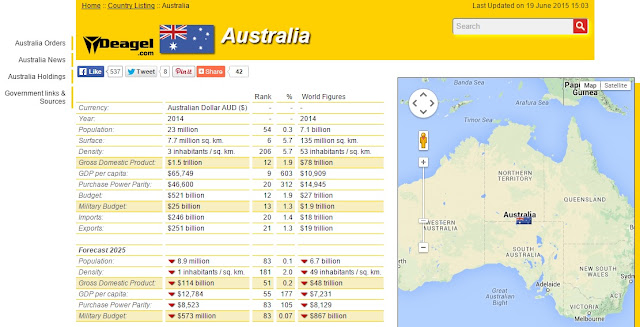 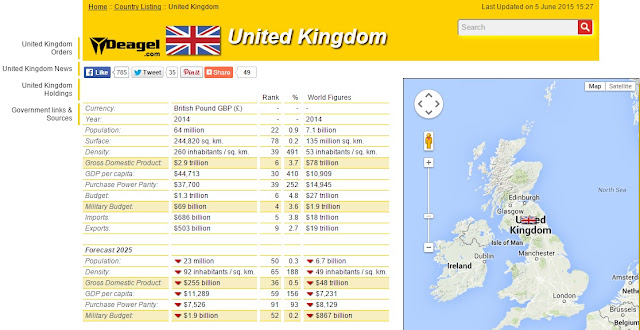 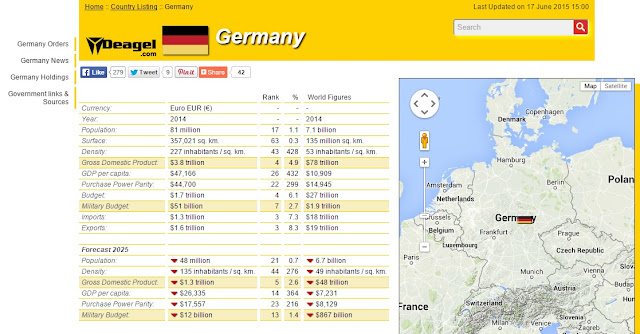 According to these numbers listed here, "they" are expecting a massive population drop in the typical G7 nations, European Union and others.

Nick and I have discussed all the various scenarios that could encompass this type of population drop: major physical/geographical event, Disease, etc....   and yea, ok, could happen that way.   BUT....

Then you look at the BRICs Nations: 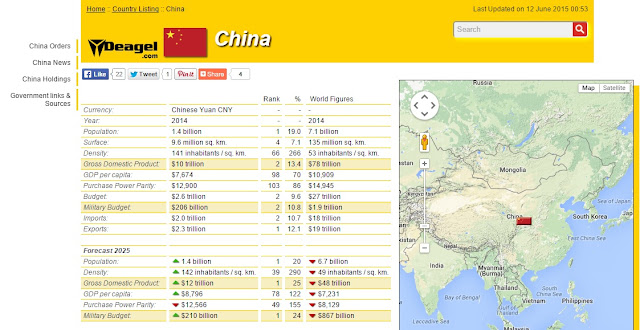 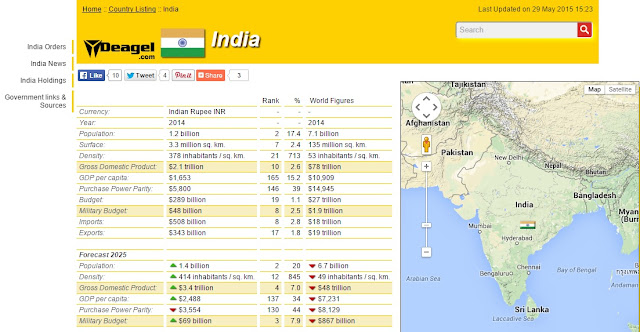 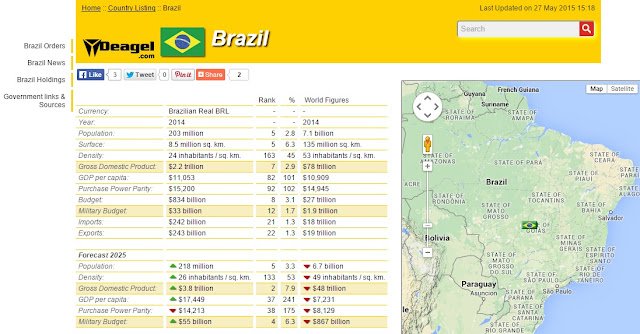 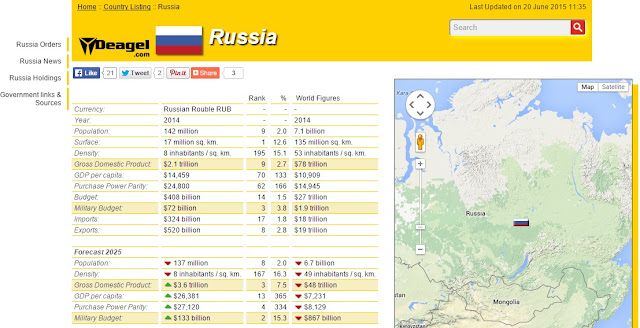 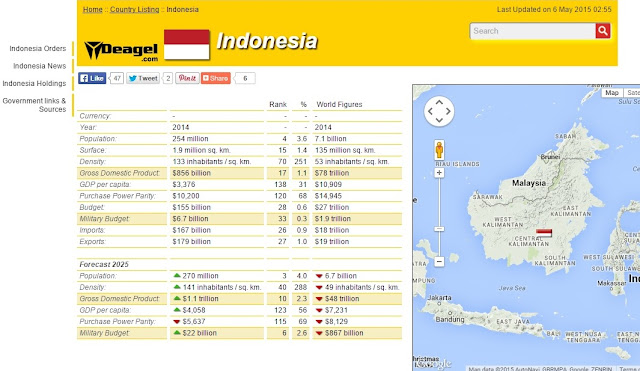 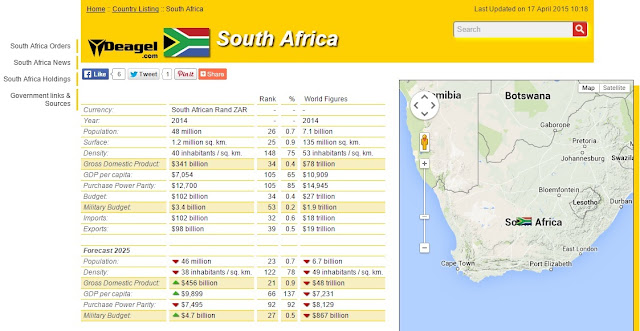 If you look at the country list, Africa, South America, and most of Asia are seemingly untouched, or have very small drops in their populations(the exception is Japan!), and most of the Caribbean doesn't have  2025 listings.  But the NATO nations all have significant drops- with the exception of Turkey.  Middle East, very little drops, except Israel, which is showing a HUGE drop.

All I can say for this moment is that the information is.... interesting, and in my opinion, worth looking at.   A piece of the puzzle perhaps?

The article below has a few videos- especially the third video, where the author of the article discovered that his IP address has been blocked from the Deagle website......

Economic Collapse Will Lead to Massive 78% Depopulation in America

SHTFPlan Marc Slavo – May 9, 2015
With economic malaise on the horizon and any number of triggers ready to set things into motion, military site Deagel.com recently posted their global forecast for 2025.
The site, rumored to be a front for various alphabet intelligence agencies, says that America will soon see a large reverse migration as those who came here seeking riches and safety will emigrate out of the country following a serious, multi-year crisis. *** continue

The CIA Front Group, Deagel, Brings Clarity to the Megacities Concept
Being a front group for the CIA, Deagel, is predicting that we are about a decade away from this hellish nightmare.
Just who is Deagel? The power and influence of the corporation that you never heard of, is staggering.  This is the modern day Zapata Oil, which was a CIA front corporation run by George H. W. Bush which in turn facilitated much of the Air America “drugs for guns” program in Latin America in the 1980’s.
My sources tell me that Deagel is the same exact kind of organization as Zapata Oil. Deagel ran guns through the late Ambassador Chris Stevens and subsequently delivered them to al-Qaeda in Libya and in Syria at the time of Stevens’ death. Deagel was intimately involved in Benghazi in ways that will be revealed in a later article. Deagel is not just a gun running/drug running/child sex trafficking organization, they are also intimately connected with the business as “Open source intelligence links”. This means that Deagel and their partner (affiliations listed below) serve as marketing companies for the CIA and sell intelligence information to the highest bidder. Stratfor and Deagel provide the CIA with a minimum of two degrees of separation from nefarious operations which could taint the U.S. government and in particular, the CIA. These activities will be the topic of a future article. The focus of the remainder of this article is the destruction and depopulation of the United States.
Deagel is a group that gets their hands dirty and they play both sides of the fence. Please note the publicly available list of Deagel partners, listed below. They do business with the Russian Defense Procurement Agency, but they are largely an American contractor with ties into the U.S. Navy, the NSA and the CIA, through Stratfor. If anyone wanted to make the case that I have, the “Bastard Banksters from Basel” control both sides of the coming WW III for fun and profit, the data trail of Deagel exemplifies this point. From the following information, we get a strong indication of how the U.S. is going to be depopulated. To further examine this possibility, take a look at a partial list of Deagel partners. The following list clearly shows that Deagel is “locked in” when it comes to the power centers on this planet.
A Partial List of Deagel Partners
http://www.thecommonsenseshow.com/2015/03/04/america-has-a-definitive-date-with-depopulation/