Could UFO sighting be sign CERN has created portal to other dimension?


Yet another interesting report out of the main stream media about CERN.   Strangely enough, both article are from England.

What is the purpose?   Is it "Notice"?  Is it a deliberate attempt to bring ridicule into the topic, thereby negating anyones opinion if they believe that "something" is going on at CERN?  The very fact that British MSM are publishing these articles brings a lot of questions to the table of.... WHY?

Are we all going to die next Wednesday?

Two nightmare scenarios, two ends of the world. In the first, there is little warning. For maybe a month there would be no sign that life was about to come to an abrupt and nasty end for all living things on Earth.
Then, earthquakes would start unexpectedly, alerting geologists that something terrible, unimaginable, was amiss.
After a few days, these seismic disturbances would reach catastrophic proportions.
Cities would be levelled, the oceans would rise and wash in a series of mega-tsunamis that would attack the world's coasts, killing millions. 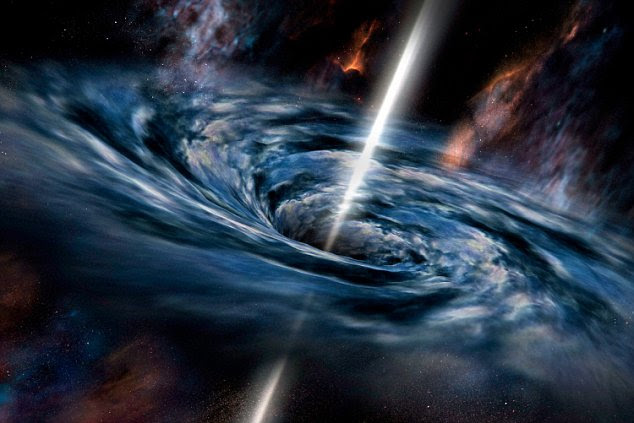 Is the end of the world nigh? Doom-mongers fear the consequences of scientists replicating the Big Bang


COULD this image of a bizarre object snapped above the Netherlands be the first ever picture of a portal to another dimension?
Dutch snapper Harry Perton was photographing stormy evening skies over Groningen in his homeland when there was a flash as he fired the shutter, that some believe could be a wormhole - similar to a black hole.
Wormholes are a mysterious scientific theory that there are openings in space-time to another part of the universe or dimension.
At the time he took the picture, Mr Perton did not realise anything out of the ordinary had happened believing it must have been a flash of lightening.
But when he reviewed the shots at home he saw the strange semi-translucent object shaped like an upside down jellyfish or toadstool.
Most of the object is a turquoise colour, while there is a sunlight-esque jet or beam of light at the base.
After it was posted online, it led to a frenzy of speculation, including whether it could be proof of wormholes, alien visitations or even a religious warning.
One commentator said: "That's a portal, it allows a craft to travel from one end of the universe to the other in a matter of seconds. Someone made a mistake when entering
our system and basically got caught. What you're seeing is a craft entering not leaving." 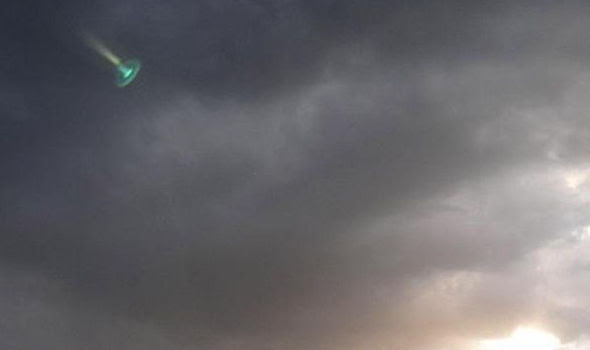 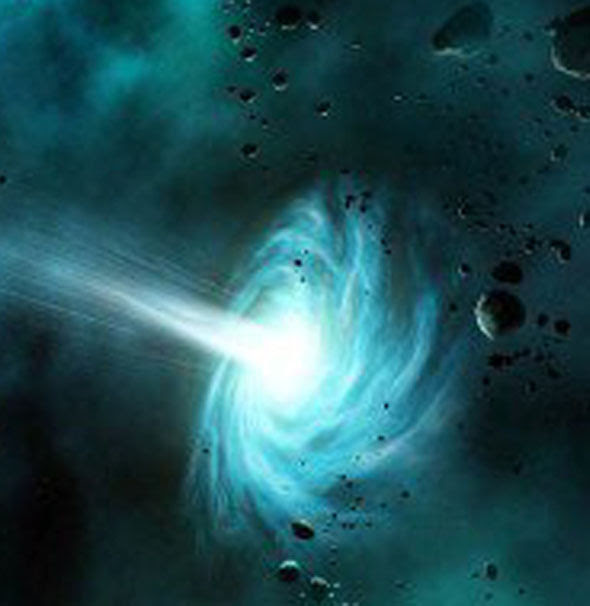 NASA
NASA computer image of how a wormhole would look 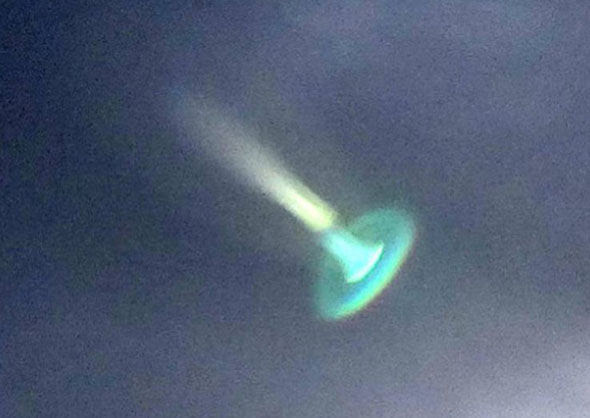 HARRYPERTON•TWITTER
The "UFO" close up

That's a portal, it allows a craft to travel from one end of the universe to the other in a matter of seconds. Someone made a mistake when entering our system and basically got caught. What you're seeing is a craft entering not leaving.
Online comment

Others speculated it could be the result of the Large Hadron Collider LHC being turned back on at twice its original power.
One posted: "It's a wormhole."
The LHC is a huge atom smashing machine which scientists are using to unlock secrets of the universe including whether parallel universes exist.
But some critics fear it is tampering too much with the laws of physics as it is accepted it could create a man made black hole or wormhole - a mysterious theoretical portal through space-time to another part of the universe or dimension.
Mr Perton said: "I was taking photos and suddenly something flashed.
"I decided it must have been a strike of lightning ­ but back at home I saw something strange in one of the photos that I took ­ what looked like a UFO."
It is not the first jellyfish-shaped UFO to apparently be caught on camera, but appears to be one of the clearest so far.
Other online posted decided it could be a fighter jet sonic boom, or even a sign of the Second coming.
One poster in Malta claimed a whole football team saw it, adding:"We where playing a football game in Malta and all the 16 players we seen<sic>it on 26th Tuesday around 8.05pm."
Another claimed to have seen the same thing six years ago in Wales.
However the bulk of posters offered a more mundane explanation that it was an example of lens flare as the camera was being pointed towards the sun.
Mr Perton remains sceptical, believing it is more likely a meteorological light trick.

Email ThisBlogThis!Share to TwitterShare to FacebookShare to Pinterest
Labels: are we all goign to die next wednesday, CERN experiments start, CERN opens dimensional portal, UFOs and CERN