A Tunisian citizen and a policeman also died in the attack, Essid said.

Armed militants disguised as soldiers attacked the Tunisian parliament and Bardo Museum, taking hundreds of tourists hostage. Fifteen tourists have been killed, and explosions were heard at the scene. Tunisian security forces eliminated the ISIL attackers and concluded the special operation.

The Islamic State jihadist group has taken the responsibility for the deadly attack in Tunisia.
Fifteen tourists were killed in a militant attack Wednesday in Tunisia’s capital Tunis. French, Spanish, English and Italian and a Tunisian are the Nationalities of the Victims, according to Mosaique FM. Previous reports put the death toll at 8.
One officer and several militants were killed during the special operation, radio Mosaique FM reported Wednesday.

This video below purported show Tunisian military surrounding the compound....

The Western Media was all over this piece of breaking news, even though it would seem that no one really knew what was going on.  The latest update from Tunisia is that 2 "Terrorists" have been killed, and the "hostages" have been freed.   But that literally is a one line headline with no backing information so far.

Out of all of this though, the first thing that struck me was the media reporting that the hostages were using social media to send pictures......  No really!  Apparently one of the "hostages" tweeted this picture 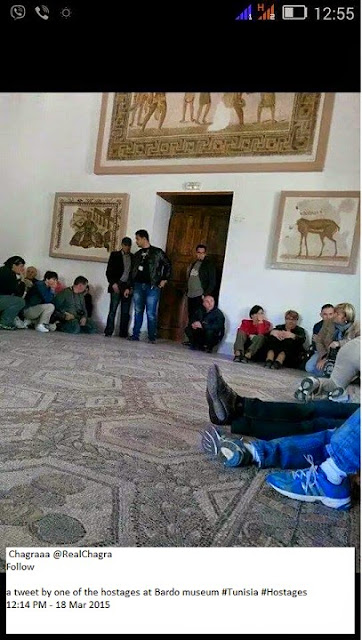 .... I find the picture rather interesting.  Everyone is calmly sitting on the floor, hangin' out, no one is crying or screaming, or freaking out..... all is calm.   Strange, don't you think?

A hostage situation is reportedly ongoing at the museum

Gunmen have fatally shot at least eight people and wounded six others at Tunisia's largest museum where a hostage situation is thought to be taking place, amid reports that shots were fired earlier at the nearby parliament building.

Interior ministry spokesman Mohamed Ali Aroui told Radio Mosaique that one Tunisian and seven foreigners were killed during the attack on the Bardo Museum in the capital, Tunis. He did not provide nationalities for the other victims.
Security forces are now surrounding the museum in the North African country where two militants are holed up inside, as the interior ministry attempts to verify reports that tourists are being taken hostage.
Foreign tourists ran for shelter, covered by security forces aiming rifles into the air, live television footage showed.

Images emerging on social media reportedly taken by a hostage appear to show around 30 tourists gathered inside a room adorned with mosaics.


According to reports from the Radio Mosaique, three men dressed in military-style clothing stormed the museum.
The UK Foreign Office said it was unable to confirm reports that two Britons were among those dead.
A spokesman said: "We are urgently looking into the serious situation in Tunisia."
At least three Polish citizens and two Italians were wounded in the attack, according to their respective officials.
An official at the Italian foreign ministry in Rome added that around 100 Italians were in the area and had been taken to safety by Tunisian police....
French Prime Minister Manuel Carlos Valls has said France would help its former colony in the wake of the tragic attack.
Earlier, the TAP state media agency reported that gunshots broke out at the country's parliament at midday.
A witness near the parliament told Reuters a large police presence was moving to evacuate the government building.
Politicians and staff have gathered in the building's hall, a member of parliament told AFP.