There is no "News"... especially not out of Sudan

The world of "News" is seriously dead right now.  It is as if every single aspect of "News" has been gagged or smothered.  The silence is actually almost deafening at the moment.  News sites are rehashing old stories, reporting on anything they can get their hands on to try and pretend that they are reporting on "News".  Yesterday CNN's website was a complete joke- so much so that I took a screen shot of their main page just to emphasize the lack of anything even remotely resembling "News": 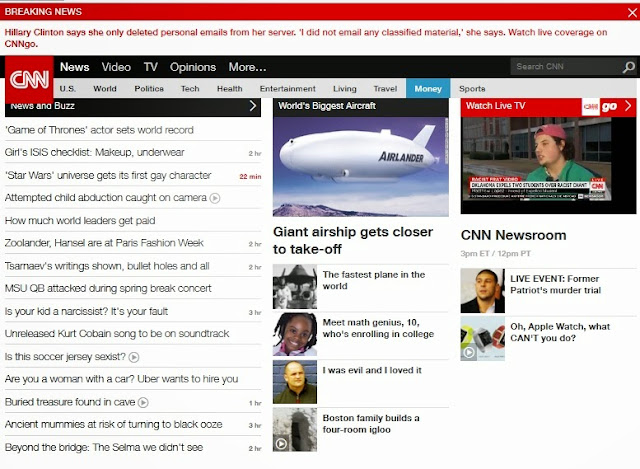 When the Lack of News IS the "News", you KNOW that something is going on in the background.  I guarantee it!

Of course the other thing going on is the lack of reporting on any of the actual news that IS happening.  CNN yesterday was forced to report on the news out of Tikrit Iraq, but only because the empty void of them NOT reporting on it was becoming blatantly visible.

Then there is this piece of news..... I wonder if western media will pick this up?  And if they do, will it be because they expect the public to be to distracted to put 1+1  together and come up with the answer  1+1=?

Sudan’s President has claimed the CIA, America’s intelligence agency, and Israel’s Mossad are behind the Islamist militant groups Boko Haram and Isis.

Omar al-Bashir used an interview with Euronews to claim there was a connection between the American and Israeli intelligence organisations and both extremist groups.

He spoke after Isis released a video purporting to show the beheading of 21 Coptic Christians in Libya, an act that prompted Egypt to respond with air strikes avenging the massacre.


Definitely no US "News" agencies covered that story, but it did get a few hits out of Europe and the UK.

BUT..... then we have this News story today:

Two planes carrying Sudanese government and ruling party officials crashed on Saturday, civil aviation authorities confirmed.
Those on board the ill-fated aircraft included Vice-President Hassabo Abdul Rahman.
The planes were on their way to Khartoum from campaigning for President Omar al-Bashir in Gadaref city in eastern Sudan.
Sudanese Civil Aviation Authority spokesman Abdul Hafiz Abdul Rahim told the Africa Review that all the passengers on board survived the tragedy.
“The first plane that crashed carried the Sudanese Vice-President while the other, which crashed a few hours later, had the head of the political sector of the ruling National Congress Party (NCP), Mr Hamid Momtaz,” the spokesman said.
Technical problem
Mr Rahim further stated that the cause of the air mishap involving the Green Flag Aviation Company planes, had not been established.
The Sudanese Vice-President, Mr Hassabo Abdul Rahman, has survived after his plane crashed at Khartoum airport on Saturday evening, the state news agency disclosed.
Khartoum airport manager Salah Salim also confirmed the incident.

Mr Salim attributed the cause of the incident to the natural circumstances, denying any technical problem with the planes.


Shall we take any bets on whether this gets covered in the US media?   Or better yet, will any American journalists have the balls to take out their calculators and add 1+1 ?


I will be discussing this story and the lack of "News" in the News, later on tonight on Transpicuous News, LIVE Stream on CCN  or right here on RTS (click the CCN screen on the Right side of the page), at 11pm GMT, or 7pm EST.... I think.  This "daylight savings time" thingy is ridiculous.

Note: On the CCN Live Stream site, the sound is automatically muted- please click the unmute button for volume.