On the Transpicuous News Report, Sunday August 30th, we primarily focused on the Financial Insanity of this past week or so  (Archive Video below)

.. and Then Monday Arrived, the markets opened and did some more very interesting gyrations.

Further to the report, several interesting article have come out that highlight some very interesting information.  And it's not just the alternative media- Sputnik just published an article quoting Gerald Celente's doom predictions, which is an interesting twist in the propaganda machine of Russia.

Below are a few of the interesting articles that have come out lately, and a few of the screen shots from TN on Sunday.

US is Gearing Up for Onrushing Economic Apocalypse

America is hurling all of its effort into preparing for a September “apocalypse,” as economic forecasts are becoming more and more intimidating, RT columnist Robert Bridge wrote.
US Economic Confidence Index rating, confidence in the US economy among Americans dropped to its lowest level in July. Nothing to be surprised about, considering that each and every economy analyst deems it duty to share predictions on the country's nearest future in a campfire scary story manner...
It does seem like professional economists are competing in a think-of-the-most-dreadful-metaphor contest when describing what awaits global economy.
The founder of Trends Research, who predicted the "panic of 2008," believes that soon we will witness the crash of a global stock market and predicts
"the economic earthquake [that] will send reverberations around the world".
"There's going to be panic on the streets from Wall Street to Shanghai, to the UK down to Brazil." Celente told King World News. "You're going to see one market after another begin to collapse."
Analyst Larry Edelson took the fear to the next level as he even predicted the exact day the catastrophe begins, or, as he called it, a "rollercoaster ride through hell."
"On October 7, 2015, the first economic super cycle since 1929 will trigger a global financial crisis of epic proportions." He said.
"It will bring Europe, Japan and the United States to their knees, sending nearly one billion human beings on a roller-coaster ride through hell for the next five years. A ride like no generation has ever seen."


The leverage in all markets suggests a “holiday” will occur because the unwinding cannot be orderly
by Bill Holter, SGT Report:

“Something” happened three weeks ago. While we cannot be sure “what” exactly happened, we can speculate. We have many dots and lots of data points to help us but first it needs to be pointed out, even if wrong in conclusion …just the knowledge alone that “something changed” is enough. If you know something has changed, you can take clues and look at various markets for inflection points. Currently, most markets are stretched to various limits. Whether it be zero bound credit markets, equities, real estate, commodities or gold and silver, all values had reached extreme highs or lows.
Something changed three weeks ago and a series of events began. It all started with China announcing 600 additional tons of gold. This was followed by the IMF rebuff of China, the three yuan devaluations and three “coincidental” explosions. Then equity markets around the world (which were already weak) began to violently unravel and finally spilled over to the U.S.. This tested the PPT’s limits (which were apparently $23 billion last week).....
There were several more major anomalies in gold. As of Friday, there were 63 August contracts still open …even though the contract went off the board. This has NEVER happened in 40 years! How is this possible?...
Over in silver, did you know they had confirmed volume on Thursday of 122,482 contracts traded? Did you know this represents 612 MILLION ounces of silver …or over 87% of annual global silver production ex China and Russia? How in the world does 87% of a full year’s production trade in just several hours? Doesn’t this go against commodity laws? AND, silver was pummeled on Thursday so it was supposed to represent PANIC SELLING. Who was panicking and needed to sell all that silver so fast? ....
Before telling you what I think has changed, we need to look at what China has just done. China has sold $100 billion worth of Treasury bonds over the last two weeks....the Federal Reserve had to buy the $100 billion worth of bonds. This is “reverse” QE or as they now say “QT” (quantitative tightening).
....The important thing is you understand “something” very big has happened and trends are changing in many markets. The leverage in all markets suggests a “holiday” will occur because the unwinding cannot be orderly. The “unwinding” by the way will need to undue the credit built upon credit going all the way back to Aug. 15, 1971!

Last weekend, someone at SunGard Data Systems tried to implement an upgrade to the accounting system that Bank of New York Mellon uses to calculate NAVs for the mutual fund and ETF industries. Well wouldn’t you know it, there was a "glitch" after which something became "corrupted" (so, kind of like what happens inside the Beltway on a daily basis) and so, come Monday, investors couldn’t get accurate assessments of the fair value for the funds.
Speaking of last Monday, if memory serves us, something notable happened in equity markets... oh, that’s right, the Dow crashed 1,000 points out of the gate in a harrowing bout of flash-crashing, circuit breaker-tripping mayhem and that, according to SunGard, is completely unrelated to the fact that the company still, as of Sunday night, had not calculated NAVs for all of the affected funds.  WSJ has more:

Bank of New York Mellon Corp.’s chief executive warned clients that his firm might not be able to solve all pricing problems caused by a computer glitch before markets open Monday, the latest delay in an unprecedented outage that has frustrated investors and prevented nearly 50 fund companies from providing accurate values for their holdings.

It “has taken far longer than any of us would have expected,” CEO Gerald Hassell said in a Sunday night conference call.

More than 100 employees at the New York company worked through the weekend to correct the glitch and provide up-to-date pricing for roughly 1,200 mutual funds and exchange-traded funds that have lacked accurate asset value figures since last Monday.

Mr. Hassell said BNY Mellon had calculated the net asset values for all funds through last Thursday, with the exception of one company. BNY didn’t name the company. Mr. Hassell told clients that the task would be complete for mutual funds sometime Monday morning but didn’t promise to provide all values before the market opens. Correct prices for exchange-traded funds are expected to be fixed before the open, he said.

The outage has roiled money-management firms that strive to provide investors with accurate pricing for their funds. In its first attempt at quantifying the outage, BNY Mellon said that 20 mutual-fund companies and 26 providers of exchange-traded funds had been affected.

Setbacks in resolving the issue have put BNY Mellon’s reputation on the line, said analysts, likely prompting some clients to at least consider whether to move their business to a rival custodian.

Fund companies affected include Goldman Sachs Group Inc., Guggenheim Investments, Prudential Investments, Federated Investors and Invesco PowerShares. All have had to rely on backup methods for calculating asset values, and are now reconciling the values that they published last week with the new data provided by BNY Mellon.

Got that? Essentially, if you own an ETF or a mutual fund provided by one of the affected companies, there’s no way to be sure that the NAV you’re looking at is accurate. ....
....Now to be fair, no one will ever know precisely what went wrong with the ETF pricing model last Monday, and our guess is that broken, manipulated markets are the root cause of the problem and to the extent that a “glitch” in SunGard’s systems is to blame, we can’t help but think that the sheer chaos which unfolded after the opening bell last Monday might have simply overwhelmed or otherwise confused the system.
Of course Bank of New York Mellon can’t simply come out and say that broken markets broke its accounting software because that would be to place the blame squarely where it belongs and everyone knows that is a very dangerous thing to do.
http://www.zerohedge.com/news/2015-08-31/bny-scrambles-fix-unresolved-etf-glitch-monday-market-open


Seriously, what the f##k is going on over there?
This is the second explosion in Shandong, which both follow the huge and deadly explosion in Tianjin....

China to close around 10,000 factories this week to ensure blue skies for big parade

via Wall Street Journal
Let's hope it all goes off smoothly and safely. Markets will, of course, be concerned about the impact of slowing production in China amidst broader concerns on the economy.
http://news.forexlive.com/!/china-to-close-around-10000-factories-this-week-to-ensure-blue-skies-for-big-parade-20150830

Markets will be concerned about slowed production?!?   Are you kidding me?  China's production - especially in the Steel industry has all but ground to a halt over the past few months BECAUSE NO ONE HAS ANY MONEY TO ORDER NEW SHIPS, CARS, CONTAINERS ETC.....  The shipping rates index plummeted in July and August in a desperate attempt to convince companies to ship something.... ANYTHING!  Because no one is BUYING.   So is China's massive industry shutdown about clearing up the pollution so they have lovely blue skies for the day of their parade..... or is it a drastic attempt to equalize production vs sales? 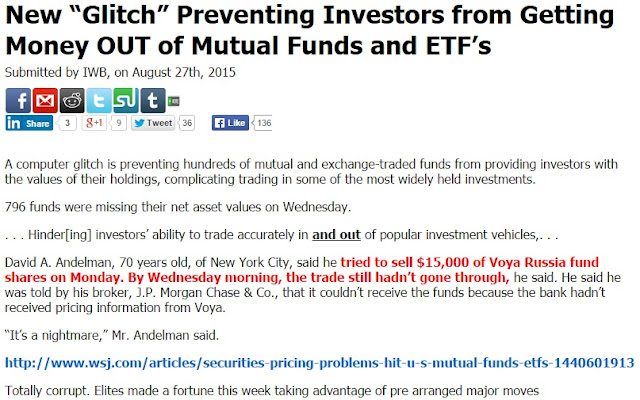 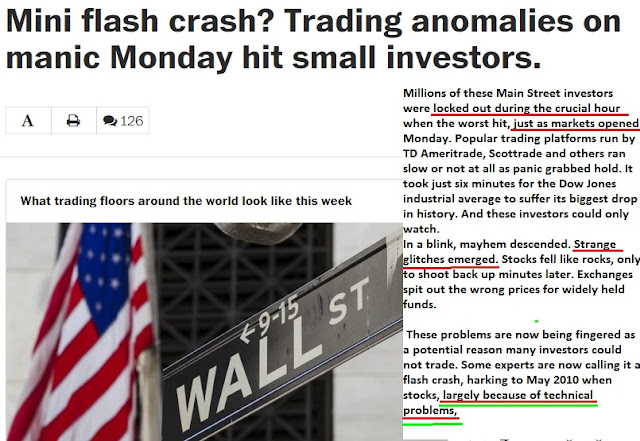 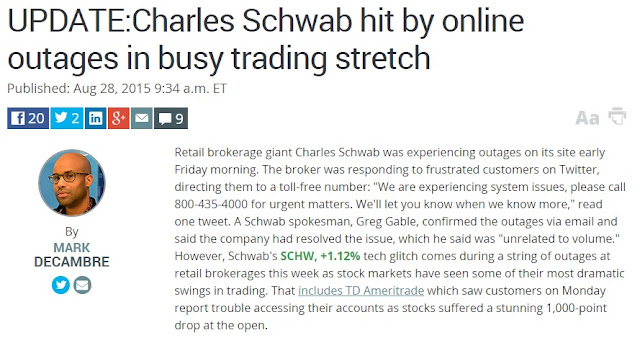 And Then there Was Today....

Markets sank globally today, with the DOW closing 469points down.... BUT, THIS was an interesting piece of information:


The little-used NYSE rule that can tame a wild market

The New York Stock Exchange invoked the little-used Rule 48 to pre-empt panic trading at the stock market open on Tuesday after implementing it three times in a row last week.The goal of Rule 48 is to ensure orderly trading amid financial market turbulence. It's only used in the event that extremely high market volatility is likely to have a floor-wide impact on the ability of designated market makers (DMMs) to disseminate price indications before the bell.
Unlike a circuit breaker that stops stock trading, Rule 48 speeds up the opening by suspending the requirement that stock prices be announced at the market open. Those prices have to be approved by stock market floor managers before trading actually begins. Without that approval, stock trading can begin sooner.
To invoke Rule 48, an exchange would have to determine that certain conditions exist that would cause market disruptions. Those conditions include:


.. and because I mentioned this Jim Willie interview during TN, here is the video: