This is one serious Roller Coaster Ride folks!!!

For the past few days We've been experiencing geomagnetic storm and geomagnetic storm, with some very strange .... pauses in between.  Below I've posted BPEarthwatch's latest video as he has some pretty interesting information that he's gathered on the geomagnetics, the proton density (whichis HUGE!) and CERN.

Now as you guys know, I watch CERN very carefully, and over the past few months the weirdness factor of the graphs has only gone upwards. The various graphs that represent the "emittance" and "Luminosity" have shown movements unlike anything I've ever seen before.   This week has shown some very interesting pieces....

Below are some of the information on the solar storm we are under right now- quite strong, and the latest CERN stuff.   I want to talk about a couple of things here that are really indicators of serious shit.

First off- the Aurora Borelis - or Northern Lights, are named that because.... they are only seen at the northern most points of the planet.... or I guess I should say "use to be".   The article below talks about the evening sky show being visible way way south in North America and Europe. And this isn't new, as we've had reports of  "Northern Lights" being seen in lower latitudes for at least a year or more.   To me, this is just further proof of the change in the tilt of our planet.  The reason we are seeing "Norther Lights" far to the south is because "NORTH" isn't where it use to be!!  Now, keep in mind I'm talking about physical North, NOT Geomagnetic North.

Since talking about the Earth's Tilt changing a couple of weeks ago on Transpicuous News and on the One People's Roundtable Discussion, I've had  TONs of verification from people all over about the shifting of the sunlight/visible change in the sun's passage across our sky.  People have their own personal experiences, but also things like readings from their solar panels- actual hard evidence that the earth's tilt has changed in regards to daily sun movements.  Add to that the Inuit warnings since 2009, add to that article- from main stream news- about Greenland and the fact that the sun rose 2 DAYS EARLY. Main stream science releasing a study to say that over a third of the stars in our galaxy have CHANGED THEIR ORBITS.... yes.... I now firmly believe that our planet's tilt has changed a lot.

That was just a side note by the way, lol.  We'll be discussing this in much more detail on a show very soon. 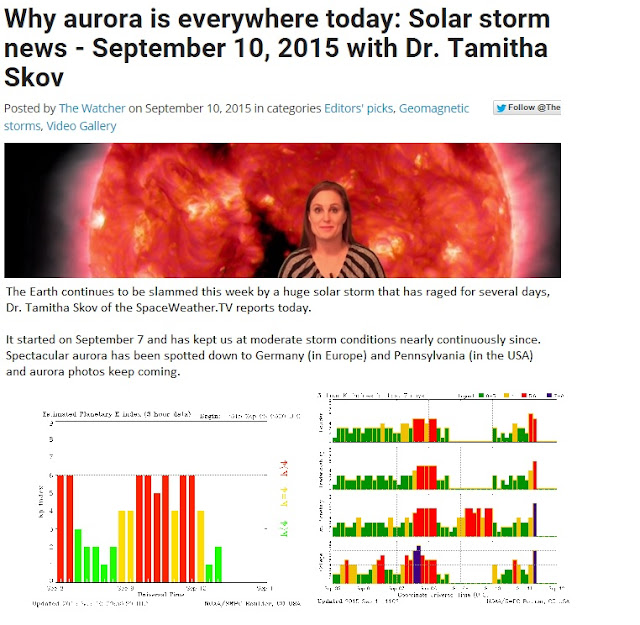 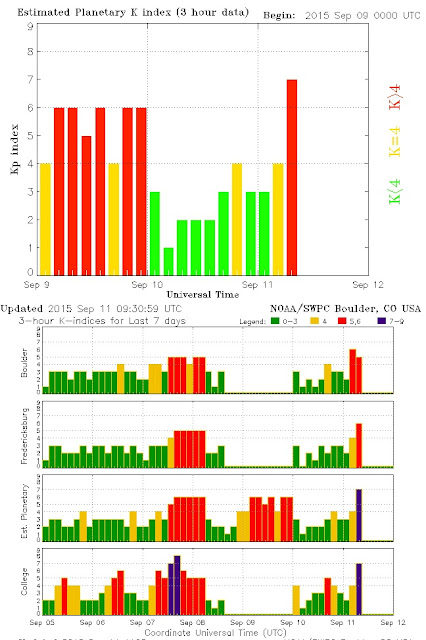 Do you see the HUGE lapse of missing data on 3 of the 4 charts for September 9th?   VERY interesting!!!!  Now look at this picture below- I took this from Tesis, the Russian Solar Observatory:

WAVE X is the big topic of conversation right now, and while I certainly don't fall for the whole "New Age" meme of "ascension" or "rapture" type rhetoric..... the question of what this "Wave" is is still strongly on my mind.  As Lisa Harrison and I have both said several times in the past few years, we've always held a very strong "knowing" (if you will) that the Sun plays and will play a huge part in the "turning on" our latent or dormant DNA, and that some sort of "galactic" event will be part of that.   As I said, I don't believe this twisting and religiousizing of "wave x", but I also don't discount that perhaps it has been co-opted into this "New Age" religion for a reason- kinda like galactic spin doctoring!! lol.

This is the live feed, a screen shot of the beams and energy on Sept 9th- showing that there are two specific spikes- at around 1200/1300 on the 8th, and at 8am on the 9th that show the beams hitting just above the 13 teV that they've been running at for a while.

This is the screen shot of the live feed taken this morning and again you can see a spike at just before 1700 yesterday that hit's almost 14TeV. 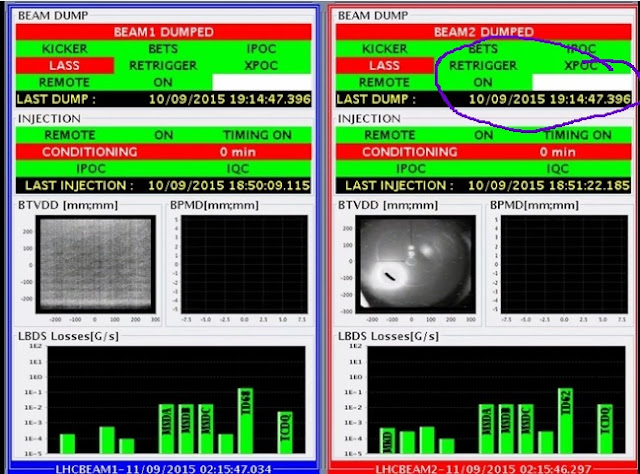 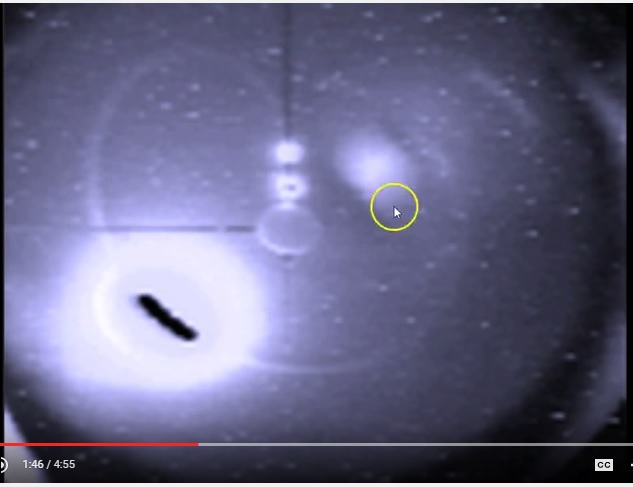 While I had the screen shots of the beams from yesterday and today, I didn't have a screen shot from the Dump.  So I have isolated the shot from BPEarthwatch's video below.

.... Something I've never EVER seen before and I have hundreds of screen shots of the Dumps.

I don't necessarily agree with BPEarthwatch about his conclusion that this is a worm hole into another area of SPACE,  BUT I do think that this may be proof that they are manipulating Timelines. We've been discussing "Timelines" and the merging of timelines/dimensions on the Roundtable for the past two weeks, looking at different hypothesis' and theories.  One of which is that our timelines are merging, and that "They" are trying to manipulate the timelines to insure that THEIR timeline is the one that becomes the main one. Is this them attempting to open that door between the timelines?

Or is it the opening to a parallel universe?  What is "TIME"?   "What is "SPACE"?    What is "DIMENSION"?   These are the questions we are asking, because it seems that words have been programmed to  confuse and to change what their original meanings are, and if we do not have the adequate words to relay information, ideas, theories.... then we lack the ability to communicate effectively.   Words like "TIMELINES",  "ARTIFICIAL INTELLIGENCE" "ALTERNATE REALITY" become difficult to discuss when you realize that we are hampered by not having the words to be able to express ourselves, and that the words we end up using have been so programmed that we jump to conclusions based on programmed agendas, through media and Hollywood.

What's the message?  IS this a message?

... if it is, could you make it a bit easier to understand Solace? lol.

As I always say:  I have the questions.... not necessarily the answers.

What I can say is this- the energy right now is seriously fucked up.  Earlier this week I was knocked sideways for over 36 hours straight- and that's a first.  I've been contacted by multiple people- people who are very.... "with it", who understand "energetics" and are awake to what's going on around the world right now... and they are all saying the same thing:

So hang on my friends.... I have a feeling that this month will take this roller coaster ride to all new speeds and heights of dizzying proportions.  All I can say is:

Be Aware, Be Prepared, and Keep your eyes on the Ball!!