Tomorrow is yet again the anniversary of the lies and deceptions of 9/11 that shook the planet and changed this world into one of War, False Flag lies and deceptions, and the ending of anything even pretending to look like "Peace" or "Freedom".

TUG: The Fall of The Empire:


For many people, September 11, 2001 sounded a death knell across the planet, as the beginning of the end of the "Land of the Free".  Much like the Reichstag Fire of 1933 that Hitler used to catapult the Third Reich into ultimate power over the German people, so too the false flag attack of 9/11 was used by the American Government  and it's Controllers, to launch the Patriot Act, the NDAA, the creation of Homeland Security, and marked the beginning of a "War on Terror" that laid bare the false pretenses of "Freedom & Democracy".But this is not just an "American thing".  The shot that was heard around the world that day signaled a massive shift by all the EU, and NATO Nations.We are now living in a police state.  A state that has taken away any and all perceived "Rights", no matter what Constitution or Declaration of Human Rights you follow.  The corporate entities that are pretending to be "Government" have sold humanity to the Corporate Controllers, under the guise of "Safety & Security", and the Main Stream Media are the whore and court jesters, who spread their disease of Fear, and words of Deception and outright lies.


This article wasn't written for my regular readers.  I have written this specifically to be shared on Social Media and with friends and family.  I have watched this past few weeks as a massive awakening seems to be taking place.  Friends are asking questions that they've never asked before, are looking at the current events that are being played out, and beginning to ask "WTF?"   This article is for them.  Those of us who have been following these things for years and years sometimes forget that for a lot of people, what they are seeing and beginning to suspect is brand new and they may be floundering in the onslaught of information.   So..... this is just a brief review of the FACTS of what happened on and after September 11, 2001.   I will be writing a further article later this evening/tomorrow to lead this information to where we are today.

Because what we are seeing right now is NOT a coincidence.

ON Sunday evening I will be doing a special Report on Transpicuous News, that will be focused on the "refugee debate" and the media circus that that is yet again spinning Distraction & Deception.  More importantly:  What are the Distracting us FROM?  So please join me Sunday night at 9pm London time- 4pm EDT, for the LIVE Stream broadcast of Transpicuous News, on CCN or watch right here on RTS.

*ALL evidence points to a professional demolition of the Twin Towers AND World Trade Center building #7- including diagonally cut beams seen in the rubble, hundreds of eye witnesses- including Firemen on the scene- reported seeing Explosions on multiple floors just before the Twin Towers fell in complete free fall collapse.  Nano Thermite was found in the dust at Ground Zero.  2200 engineers and architects have come together to state that it is IMPOSSIBLE for a steal beamed buildings to collapse due to fire- even jet fuel fire. Not only did the metal beams of two of the most expensive and structurally high tech buildings melt- the metal remained MOLTEN for 21 DAYS After the Building collapsed.

*On September 10th, 2001. Rumsfeld reported $2.3 TRILLION missing from the Pentagon.  The next day a "jet airliner" was "hijacked" and flown into the side of the Pentagon where the accounts offices held all of the information about the missing $2.3 TRILLION Dollars that just magically disappeared.

*WTC Building 7 collapsed without ever being hit by a plane, it fell into itself, in freefall within 6 seconds- official story is it had a "fire".  This could ONLY have been accomplished by a controlled demolition.  There are NO Records of ANY Steal Beamed building ANYWHERE, either BEFORE or AFTER 9/11, EVER collapsed due to a "Fire" of ANY KIND.  There are only three buildings in modern history that this has happened to, and those all happened on Sept 11, 2001- the Twin Towers and WTC Building 7.  Question:  What was in Building 7?


ALL the records that were stored in Building 7 were DESTROYED.   Look again at the list of who's offices were in the building.

* Question:  What happened to the over $1BILLION worth of GOLD that was stored in Vaults under the World Trade Center buildings?  Approx $240million dollars of gold was "recovered" ..... but stories abound that the rest was "vaporized"..... in vaults built to withstand a nuclear attack, a tsunami, devastating earthquakes.....  The GOLD Question has NEVER been answered.


These are just a very few of the questions and the facts that tell us that everything the governments and media agencies have told the world about 9/11 was a lie.

And for those who, like me, are visually stimulated, here are a few pictures worth thousands of words. 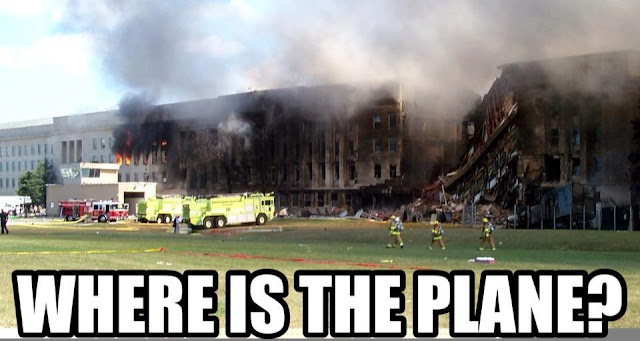