Shifting Politics: No one Wants to Dance with Netanyahu

Something is Definitely going on right now.   A Radical shift is happening that involves Israel- or more to the point, the Zionist Netanyahu. January was a very interesting month in Middle East politics and policies. The very public "shift" against Isreal was throw out for the people to see quite clearly, if they were paying attention.

First, after a huge argument with Obama, Boehner decides to take it upon himself to invite Netanyahu to speak to Congress- without any agreement From Congress nor the White House.  This sparks a huge cluster fuck argument and debate all over the news and a political mud slinging, screaming match politically.  .... nothing really unusual about that- this is Congress we're talking about after all.....  Then things started to get really interesting.....

Next thing we know, Mossad are coming out of the woodwork (literally, lol), and telling tales on Netanyahu to Obama- with the news running headlines like "Israeli Mossad goes rogue", which was immediately followed by Netanyahu throwing a hissy cow over Obama saying NO to meeting him, and then blaming Obama for leaking the report that his own Mossad people disagree with him. 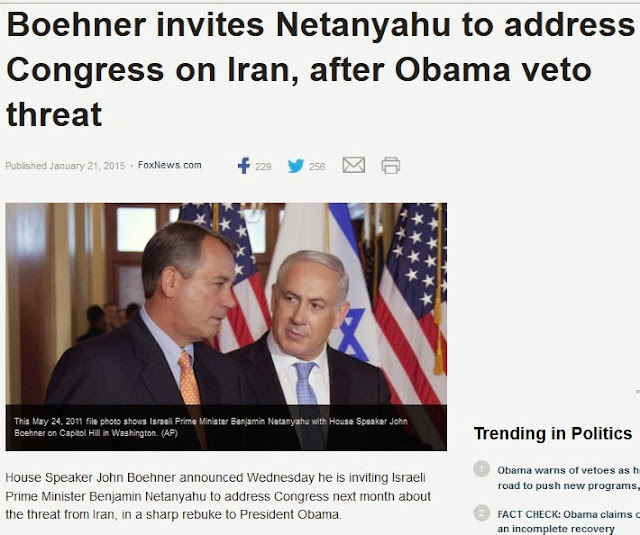 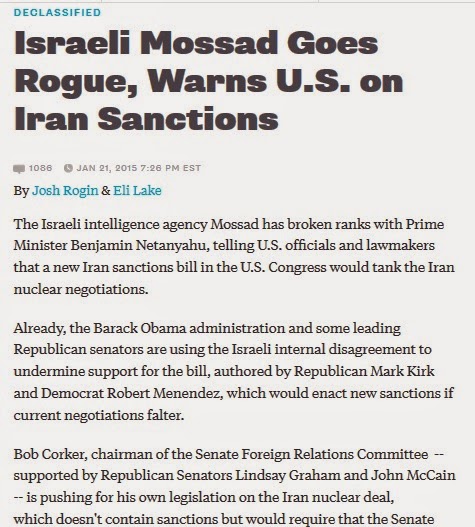 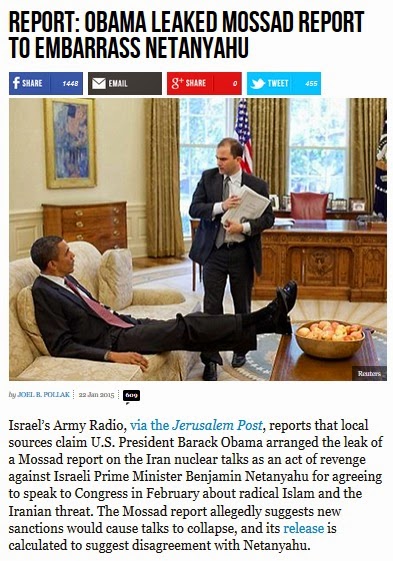 THEN.....We get this news report that both the US and EU have "warned" Israel to drop it's plans to construct 450 new homes in the West Bank- which, of course, would cause another mini war.  The fact that both the US and EU both came out publicly with this was eye brow raising to start with, but when the next story broke, that the EU was about to put sanctions on Israel over this land grab move, less than 11 days later......?!?   WTF?!  Has the political world turned upside down suddenly?

.... Something Definitely has shifted, and it doesn't look like that shift is in Netanyahu's favor. 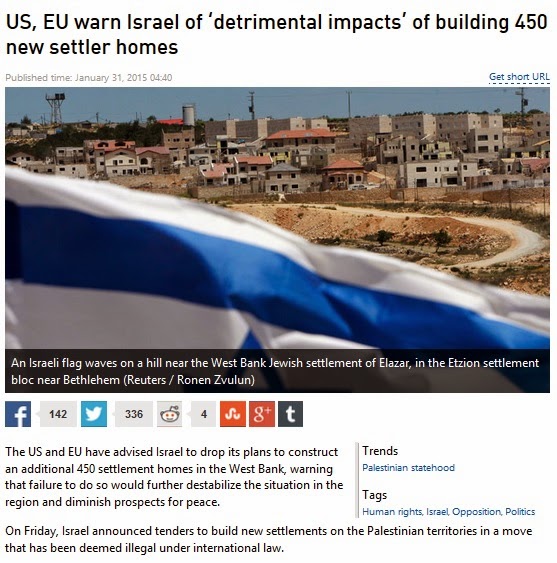 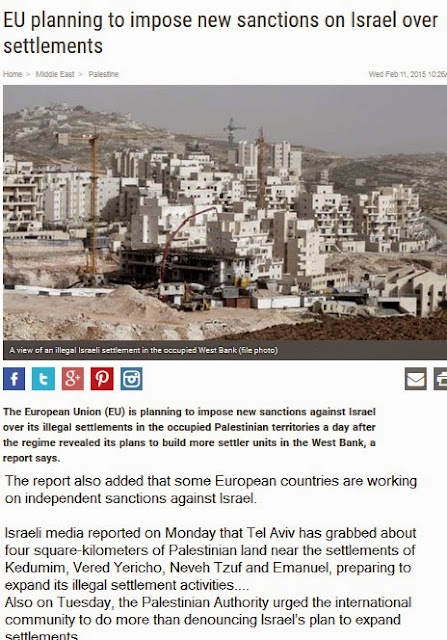 Did you know that the Israeli elections are March 15th?

I found this article in USA Today quite interesting, especially this quote:

Israeli law prohibits foreigners from donating money directly to the country's political parties once candidates are chosen in primaries, but they can donate to partisan, non-profit organizations that promote the political viewpoints associated with Israeli parties or candidates. The parties say they have no links to these groups.
There is no legal ban on foreign campaign consultants.
The Republican consultants and money supporting right-wing causes provide a boost to Netanyahu's Likud Party, while the Democrats back the more liberal Labor Party and the Zionist Camp, a center-left coalition that includes Labor.

In a statement to USA TODAY, Likud confirmed that Republican political strategists Vincent Harris and John McLaughlin have "advisory roles to complement" the party's professional team to "ensure the public is aware of the party's accomplishments and plans for the future."


Then add to that, this interesting piece of information that was finally released through the Freedom of Information Act just last week ...... after 3 YEARS!

..... have I mentioned that I do not believe in coincidences?

The highlights have been added by me.

Conceding to a federal lawsuit, the US government agreed to release a 1987 Defense Department report detailing US assistance to Israel in its development of a hydrogen bomb, which skirted international standards.
The 386-page report, “Critical Technology Assessment in Israel and NATO Nations,” likens top Israeli nuclear facilities to the Los Alamos and Oak Ridge National Laboratories that were key in the development of US nuclear weaponry.
Israelis are "developing the kind of codes which will enable them to make hydrogen bombs. That is, codes which detail fission and fusion processes on a microscopic and macroscopic level,” said the report, the release of which comes before Israeli Prime Minister Binyamin Netanyahu's March 3 speech in front of the US Congress in which he will oppose any deal that allows Iran's legal nuclear program to persist.


"I am struck by the degree of cooperation on specialized war making devices between Israel and the US," Roger Mattson, a formerly of the Atomic Energy Commission’s technical staff, said of the report, according to Courthouse News.
The report’s release earlier this week was initiated by a Freedom of Information Act request made three years ago by Grant Smith, director of the Washington think tank Institute for Research: Middle Eastern Policy. Smith filed a lawsuit in September in order to compel the Pentagon to substantially address the request.
"It's our basic position that in 1987 the Department of Defense discovered that Israel had a nuclear weapons program, detailed it and then has covered it up for 25 years in violation of the Symington and Glenn amendments, costing taxpayers $86 billion,” Smith said during a hearing in late 2014 before Judge Tanya Chutkan in US District Court for the District of Columbia.

Smith described in his federal court complaint how those federal laws were violated by the US in the midst of Israel’s budding nuclear program.
"The Symington Amendment to the Foreign Assistance Act of 1961 prohibits most U.S. foreign aid to any country found trafficking in nuclear enrichment equipment or technology outside international safeguards,” Smith wrote.
“The Glenn Amendment of 1977 calls for an end to U.S. foreign aid to countries that import nuclear reprocessing technology."
In November, Judge Chutkan asked government lawyers resistant to the report’s release why it had taken years for the government to prepare the report for public consumption.
“I’d like to know what is taking so long for a 386-page document. The document was located some time ago,” Chutkan said, according to Courthouse News Service.
“I've reviewed my share of documents in my career. It should not take that long to review that document and decide what needs to be redacted.”

image from the report “Critical Technology Assessment in Israel and NATO Nations"
The government’s representatives in the case -- Special Assistant US Attorney Laura Jennings and Defense Department counsel Mark Herrington -- initially said confidentiality agreements required a “line by line” review of the Defense Department’s report. They later shifted, arguing that its release is optional and not mandatory, as "diplomatic relations dictate that DoD seeks Israel's review."
Smith and the US agreed that the government would redact sections of the report on NATO countries, though the passages on Israel remain intact.
"The capability of SOREQ [Soreq Nuclear Research Center] to support SDIO [Strategic Defense Initiative Organization, or “Star Wars”] and nuclear technologies is almost an exact parallel of the capability currently existing at our National Laboratories," said the report, written by the Institute for Defense Analysis for the Department of Defense.
"SOREQ and Dimona/Beer Sheva facilities are the equivalent of our Los Alamos, Lawrence Livermore and Oak Ridge National Laboratories...[and have] the technology base required for nuclear weapons design and fabrication."
The report’s authors Edwin Townsley and Clarence Robinson found that Israel to had Category 1 capability regarding its anti-tactical ballistic missile and “Star Wars” weapons programs.
"As far as nuclear technology is concerned the Israelis are roughly where the U.S. [w]as in the fission weapon field in about 1955 to 1960,” the report said. “It should be noted that the Israelis are developing the kind of codes which will enable them to make hydrogen bombs."
In a statement on the report’s release, Smith said Thursday, "Informal and Freedom of Information Act release of such information is rare. Under two known gag orders -- punishable by imprisonment -- U.S. security-cleared government agency employees and contractors may not disclose that Israel has a nuclear weapons program."

Israeli Prime Minister Binyamin Netanyahu’s planned address before the US Congress was controversially arranged by Republican leadership without consultation of congressional Democrats or the White House.
The speech will occur weeks before Netanyahu will seek reelection, and is to center around his opposition to any agreement with Iran over its nuclear program, a deal the US -- while levying heavy sanctions on Tehran -- has pursued despite protests from its preeminent ally in the Middle East, Israel.
Tehran’s nuclear program is legal under the terms of the Nuclear Non-Proliferation Treaty, to which Israel is one of the few United Nations members that is not a signatory.

Yes, there is some serious shifting going on in the world, especially in the Middle East and the areas surrounding it.  Saudi Arabia is also doing a dance, so is Egypt, so is the UAE......   Watching Russia through all of this is VERY Interesting.....


For those of you who want to review this special released document, I have downloaded it below.

CRITICAL TECHNOLOGY ASSESSMENT IN ISRAEL AND NATO NATIONS
Posted by D ... Breaking The Silence at 14:05