The vast majority of Canadians I know have a serious issue with their superiority complex that always looks down it's nose at those south of the border.... which is a spectacular feat considering how deeply they have their heads dug down into that rosy coloured sand.

Try explaining to the vast majority of Canadians that yes, the Canadian banks were bailed out by the Canadian Government during the 2008/9 crash.  The only difference is that the Canadian government was better at hiding it from the populous  and kept the Canadian media singing the American finger pointing song which apparently really was an excellent  distraction as a good portion of the Canadian population was so transfixed by the train wreck going on due south that they are STILL clueless about the economic condition of their own country.   The media brainwashing continued- and I have to label it "brainwashing" because I cannot figure out any other explanation for an entire country of people who parrot the same ideologies over and over again- empowering an entire nation to think that the grass was definitely greener on the norther side of the border.   Try explaining to Canadians that we actually have a MUCH higher  household Debt ratio than the US.... 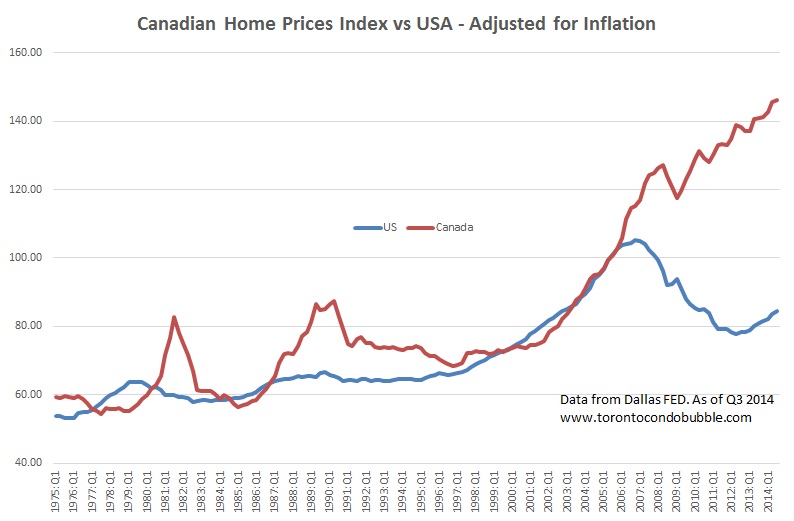 ... Or even this picture.... definitely worth a thousand words:


Well my fellow Canadians... it's time to shuck the rose coloured glasses, shake the sand out of your hair, and pay attention.

inShare5
Ratings agency Fitch had already warned about Canada’s magnificent housing bubble that is even more magnificent than the housing bubble in the US that blew up so spectacularly. “High household debt relative to disposable income” – at the time hovering near a record 164% – “has made the market more susceptible to market stresses like unemployment or interest rate increases,” it wrote back in July.
On September 30, the Bank of Canada warned about the housing bubble and what an implosion would do to the banks: It’s so enormous and encumbered with so much debt that a “sharp correction in house prices” would pose a risk to the “stability of the financial system” [Is Canada Next? Housing Bubble Threatens “Financial Stability”].
Then in early January, oil-and-gas data provider CanOils found that “less than 20%” of the leading 50 Canadian oil and gas companies would be able to sustain their operations long-term with oil at US$50 per barrel (WTI last traded at $47.85). “A significant number of companies with high-debt ratios were particularly vulnerable right now,” it said. “The inevitable write-downs of assets that will accompany the falling oil price could harm companies’ ability to borrow,” and “low share prices” may prevent them from raising more money by issuing equity.
In other words, these companies, if the price of oil stays low for a while, are going to lose a lot of money, and the capital markets are going to turn off the spigot just when these companies need that new money the most. Fewer than 20% of them would make it through the bust.
To hang on a little longer without running out of money, these companies are going on an all-out campaign to slash operating costs and capital expenditures.The Canadian Association of Petroleum Producers estimated that oil companies in Western Canada would cut capital expenditures by C$23 billion in 2015, with C$8 billion getting cut from oil-sands projects and C$15 billion from conventional oil and gas projects.
However, despite these cuts, CAPP expected oil production to rise, thus prolonging the very glut that has weighed so heavily on prices (a somewhat ironic, but ultimately logical phenomenon also taking place in the US).
Then on January 21 – plot twist. The Bank of Canada surprised the dickens out of everyone by cutting the overnight interest rate by 25 basis points. So what did it see that freaked it out? A crashing oil-and-gas sector, deteriorating employment, and weakness in housing. A triple shock rippling through the economy – and creating the very risks that it had fretted about in September.
“After four years of scolding Canadians about taking on too much debt, the Bank has pretty much said, ‘Oh, never mind, we’ve got your back’, despite the fact that the debt/income ratio is at an all-time high of 163 per cent,” wrote Bank of Montreal Chief Economist Doug Porter in a research note after the rate-cut announcement. Clearly the Bank of Canada, which is helplessly observing the oil bust and the job losses, wants to re-fuel the housing bubble and encourage consumers to drive their debt-to-income ratio to new heights by spending money they don’t have.
And what Fitch worried about concerning the housing market in July – that “high household debt relative to disposable income has made the market more susceptible to market stresses like unemployment…” – is now coming to pass.
On Wednesday, Statistics Canada rejiggered its job creation and unemployment numbers by slashing the number of jobs created in 2014 to a mere 121,000. December proved to be even drearier than previously reported: a total of 11,300 jobs were lost.
Now layoffs have begun to cascade through the Canadian oil patch, with 20,000 to 25,000 job cuts already announced so far. They will trigger additional job cuts in other industries. Plus Target’s 17,500 cuts to hit when it leaves Canada. Alberta’s Labor Minister, Ric McIver, told AM 770 on Saturday that the number of unemployed workers would jump by 22%. And he exhorted the government and employers to think long-term about retaining skilled workers for whenever the good times might return.