Heads up my friends!


We have a massive Filament just slightly towards the eastern limb of the sun- almost directly earth facing, AND we have a series of large Coronal Holes, running from the very north pole of the sun to the equatorial region.  We have no active flare zones at the moment, but I do expect that this Filament will rip off very soon- possibly throwing a huge CME that would be directly geoeffective towards earth.   Add to that the solar particle streams from the coronal hole and it could be a major combo.  We already have active solar X-rays streaming in. 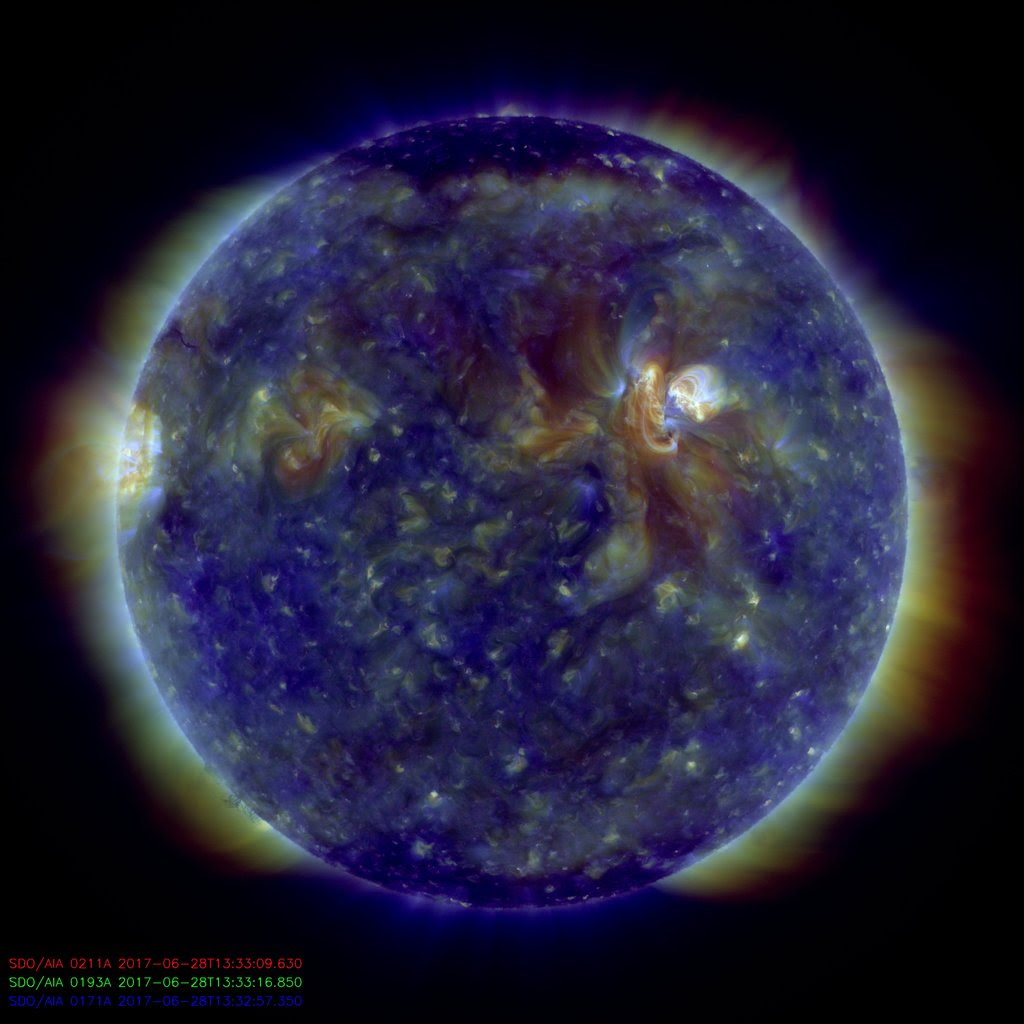 We have seen a ridiculously HUGE amount of Earth quakes in the past 72 hours of magnitude 5 and UP and volcanoes erupting in 36 different locations globally.  IF this filament rips off with a CME launched, we could have yet another round of very powerful earthquakes.   The pacific circle is SERIOUSLY messed up right now!!!! 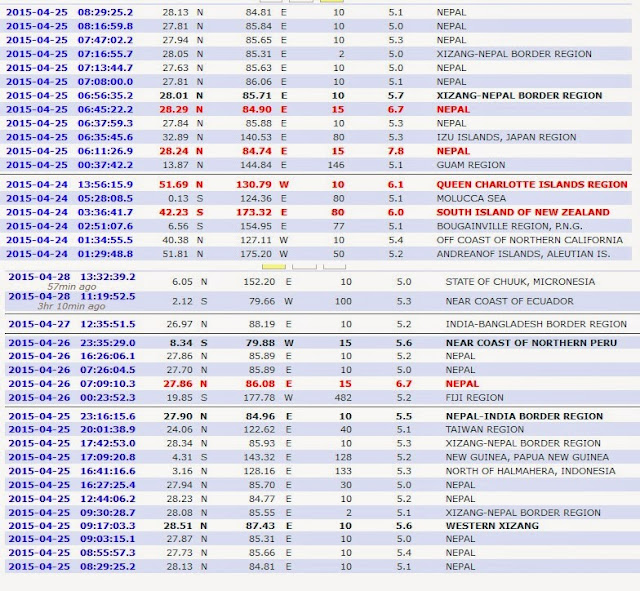 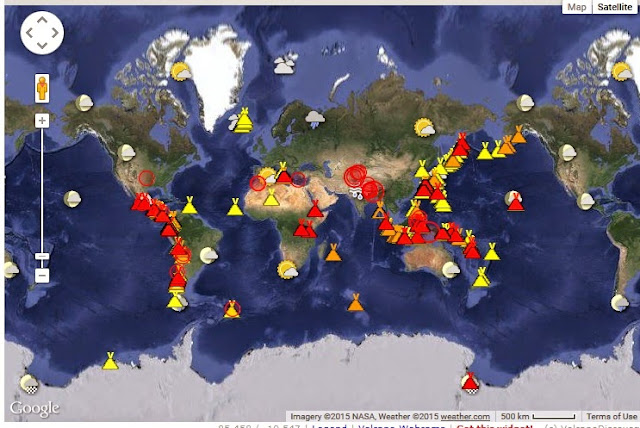 
Just less than an hour ago a smaller filament separated from the sun, and has produced an incoming CME (Coronal Mass Ejection)- I do not have the details yet of just how geoeffective the CME will be with Earth, but as soon as I have the information I will update this article.   The large Filament is still hanging on.... by a thread and I highly doubt it will last another day before it too separates from the Sun.   We also experienced a huge proton spike at around 2pm UTC ....Again, I will keep everyone updated as soon as I have new information. 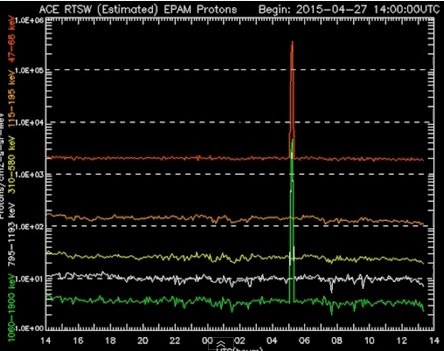 This was just updated on Solarham:

A large filament located in the northeast quadrant is now in the process of lifting off of from the sun. Sometimes following such events, intense brightening within the chromosphere near the location of the eruption, also known as a hyder flare can take place. On the other hand, plasma may be reabsorbed by the sun with little to no coronal mass ejection (CME) produced. What will happen? Stay tuned to find out.

Here is the LASCO Image of the CME Before we move on from the Solar topic I want to share with you what we just saw 3 hours ago : 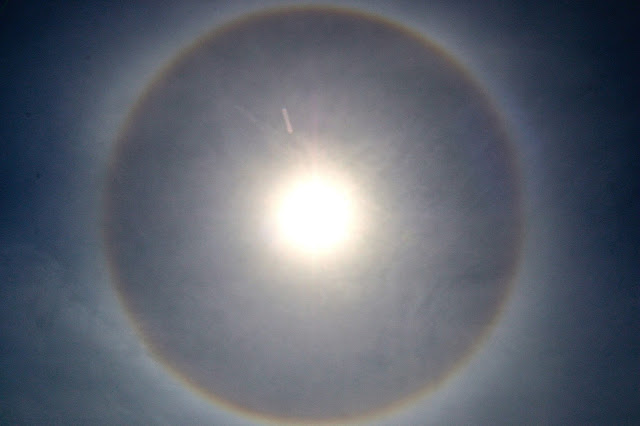 Not only did we have a full halo around the sun for HOURS today, when we took photos, we captured two different things.  First if you look at around 11o'clock on the sun disc you can see teh shadow of the HUGE filament that I have been discussing.  Also, there is a strange light streak in the sky just above the sun and beside the filament.  This is NOT a mar on the camera lens, not a reflection on the lens. This ...... light streak is in EVERY picture we took, no matter what angle  we snapped it from over the one hour period that we were taking pictures.   What is it?  Know idea.   We also have several pictures with white and pink.... dots/orbs....whatever, lol.   Interesting stuff!   I will also add that though you can't really see it in this picture the inner area between the rainbow aura and the sun itself was at least 5 shades darker than the sky that was outside of the Solar Aura.


As I mentioned in the Transpicuous News Weekend report,  Japan has just experienced some pretty amazing things. Such as a section of Hokkaido Island rising over 300 meters.... IN A DAY.  Dutchsinse' report below gives an excellent overview.

Here are a couple of spectacular photos of the Volcano erupting in Chile a few days ago: 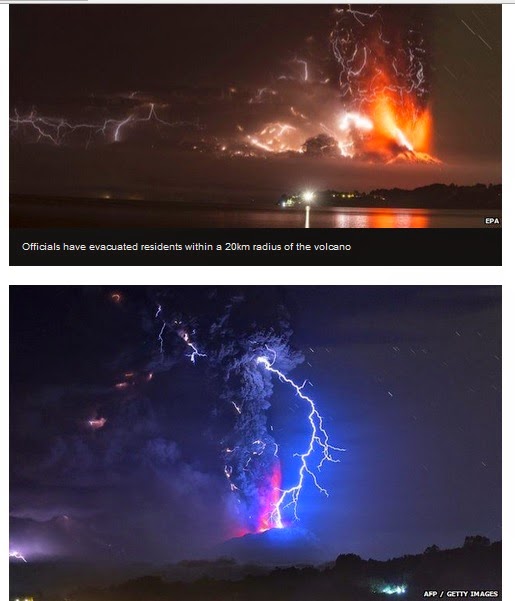 This was just forwarded to me by a friend:


....Almost 7,000 miles away in Mexico, the Colima volcano blew its top after a period of relative calm. A steam and ash cloud rose two miles into the sky and the grumbling of the mountain could be heard in towns a few miles away.

In Guatemala the ‘Fire Mountain’ belched out lava and sent up a moderate ash cloud causing an ash fall over nearby towns. The explosions and shock waves occurring in the volcano can be felt by residents over 6 miles away. Doors and windows are reported to be rattling, but there has been no damage so far.

In Vanuatu the Yasur volcano is giving some cause for concern. Although the explosions are quite weak the continuous ash that is coming from the mountain is starting to build up on farming land.

Over to Italy, Mount Etna is putting on quite a display. The current eruption started a few days ago and has been getting stronger as time moves on. A massive eruption lit up the sky and disturbed residents yesterday. The ash cloud was high enough to see flights canceled. The lava flow was the biggest in years, and the town of Zafferana which lay in its path saw some damage. Lava diverters were put into place, and most of the town escaped unscathed.

In Indonesia a four mile high ash cloud is making life hard for residents. Mount Sinabung came back to life in 2010 after dormancy of hundreds of years. Occasionally coming to life after its 2010 awakening, the rumbling of the volcano prompted the evacuation of over 6000 people as scientists feared a major eruption. There has been no lava flows so far but the ash cloud is growing.

Still in Indonesia but on the island of Java this time, Mount Merapi exploded yesterday. Hundreds of people were killed when it last erupted in 2010. There is no news of casualties at this point.

So, we have eruptions big enough to prompt evacuations. Flights are canceled, and a new island pops up off the coast of Japan. I would have called that newsworthy myself but obviously I’m wrong. If I was right it would have been common knowledge right? Reports may have been on the news right?

So many volcanoes throwing so much gas, ash and particulates into the air can have an effect on climate, this is a scientific fact. I’m not saying that these volcanoes herald the start of a new ice age but the planet certainly seems to be getting a bit more active of late.


Continued large eruptions put a huge amount of particulate matter into the atmosphere, and these particles reflect sunlight away from earth and when there is enough of them the temperatures can drop.

The Mount Pinatubo eruption lowered temperatures by around 0.5°C across the Northern Hemisphere.

Considering that we are in a cooling period anyway, having so many volcanoes going off at the same time is not good. Aside from the devastating effects the lava and ash can have on the lives of those living near to them, the global impacts can be enormous.

Lost crops due to ash fall and lower temperatures can lead to hunger and famine, as happened after the Tambora eruption in 1815.

Economic losses due to lost crops and canceled flights runs into millions of dollars a day, as with the Icelandic eruption of Eyjafjallojkull (pronounced: aya fiat la u cud la) in 2010.

The spasms of the earth come without warning, but at the same time those spasms should be a wake up call to all of us that change can happen in the blink of an eye.

Better be prepared for it.

Apparently, CERN ran into some "issues" this afternoon.    They had to dump both beams this afternoon after a problem with their Cryo in two areas. 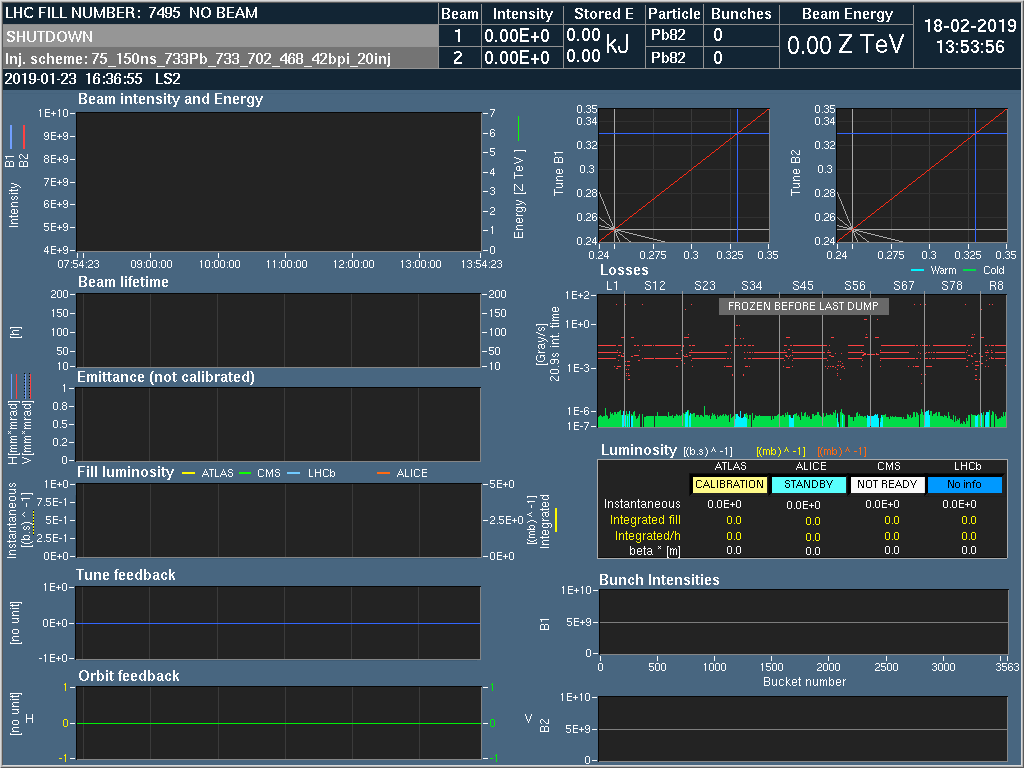 And here are the Cryogenics stats and reports- seems that there was a sudden .... upspike that started at just after 2pm...... pretty much within the same time frame that the smaller Filament separated from the Sun and threw off the CME towards Earth

.... and I find it very interesting that timing.... the emergency dumping of the beams almost exactly when the filament ripped off and we had a huge proton spike..... yes..... very interesting.
Posted by D ... Breaking The Silence at 17:44