2014: The Year Propaganda Came Of Age

Yes, 2014 was definitely the year that the propaganda machine reached Mach 1 and left a sonic boom of deafening questions behind it.

It IS time to change that.  It is time to take back the "media" and destroy the propaganda apparatus that is holding the public in a drooling trance.

At midnight on December 31 we are celebrating the launch of CCN- The Conscious Consumer Network- full live stream broadcasting for the alternative media.  I will be continuing my weekly Transpicuous News show- live- covering financial and government fraud, and will be part of the One People's Round Table discussions with Lisa Harrison and Brian Kelly, with weekly guests.  I will also be introducing a new show in the new year that will be based on Maternal and Infant Health, and addressing the parent and infant bonding issues that the propaganda and medical machine has deliberately tried to rip apart for the past 80 years.

In the next few weeks, The One Network Everywhere will be launching a campaign to bring onboard journalists and camera"men" from all over the world, to use the Zoom platform on their smart phones to record video coverage of every false flag, hot zones, and public events as they happen - to live stream on CCN so that the world can actually SEE EXACTLY WHAT IS GOING ON.... EVERYWHERE!!

Yes!!!  It IS time to bring down the propaganda machine!!!! 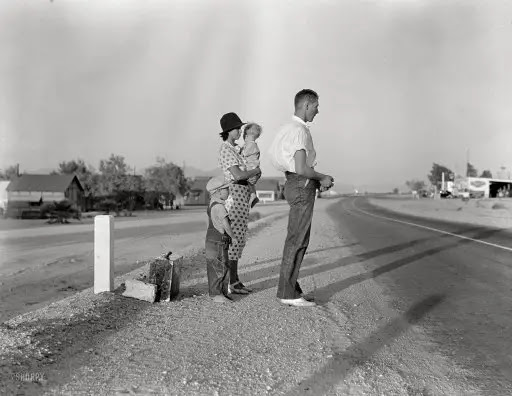 Dorothea Lange Drought hit OK farm family on way to CA Aug 1936
From just about as early in my life as I can remember, growing up as a child in Holland, there were stories about World War II, and not just about Anne Frank and the huge amounts of people who, like her, had been dragged off to camps in eastern Europe never to come back, but also about the thousands who had risked their lives to hide Jewish and other refugees, and the scores who had been executed for doing so, often betrayed by their own neighbors.
And then there were those who had risked their lives in equally courageous ways to get news out to people, putting out newspapers and radio broadcasts just so there would be a version of events out there that was real, and not just what the Germans wanted one to believe. This happened in all Nazi – and Nazi friendly – occupied European nations. The courage of these people is hard to gauge for us today, and I’m convinced there’s no way to say whom amongst us would show that kind of bravery if we were put to the test; I certainly wouldn’t be sure about myself.
Still, without wanting to put myself anywhere near the level of those very very real heroes, please don’t get me wrong about that, that’s not what I mean, I was thinking about them with regards to what is happening in our media today. I’ve mentioned before that I don’t think Joseph Goebbels had anything on US and European media today.
That propaganda as a strategic and political instrument has been refined to a huge extent over the past 70-odd years since Goebbels first picked up on Freud’s lessons on how to influence the unconscious mind, and the ‘mass-mind’, as a way to ‘steer’ an entire people, not just as a means to make them buy detergent. These days, the media can make people believe just about anything, and they have the added benefit that they can pose as friends of the people, not the enemy.
But there is a reason why such a large ‘industry’ has developed on the web with people writing articles that don’t say what the mass media say. That reason for is, obviously, first and foremost that not everybody believes whatever they are told. The problem is equally obvious: not nearly enough people are being reached to make a true difference, and to question the official narratives.
Me, I have no claim to fame outside of the appreciation I get from first, my readers and second, from my colleagues and peers. I get a lot of both, and I thank you for that, but this certainly is not about me. If anything, it’s about trying to live up to the desire for truth in the face of odds squarely stacked against it, and against the people I try to reach out to. Trying to do just 0.1% of what the WWII underground press was about.
A few days ago, I wrote in About That Interview :


The FBI claims they are certain the hackers are North Korean, but they have provided no proof of that claim. We have to trust them on their beautiful blue eyes. I think if anything defines 2014 for me, it’s the advent of incessant claims for which no proof – apparently – needs to be provided. Everything related to Ukraine over the past year carries that trait. The year of ‘beautiful blue eyes’, in other words. Never no proof, you just have to believe what your government says.