Well well well.... I do love when pieces flow together in a seamless stream of information.  I woke up this morning to three different posts in the new UnFuckers Unite Facebook group, that ties some interesting information together today.

First up, this report http://mysteriousuniverse.org/2015/10/ghost-cities-mysteriously-appear-over-parts-of-china/

Imagine looking out a window at dusk on a misty evening and seeing the ghostly skyline of a mysterious city floating in the sky above you. This actually happened in early October when residents of Foshan, China, saw a mysterious ghost city hovering over their own city. It happened again a few days later in Jiangxi. Reports of these sightings recalled a similar ghost city appearing over a river in Huanshan City in 2011. Are these mirages, apparitions of ghost cities, views into another dimension or something else?

go to the original article to watch the videos

I responded in the UnFuckers Unite Group that this story is similar to the story I covered on Transpicuous News this past spring:

Dani Arnold-McKenny hmmmmmm this is interesting. I covered a news story out of Africa- back in spring 2015- a small village in Nigeria (i'll have to look it up) - the entire village saw a city in the clouds above them- 100% of the villages saw it. then a few days later they saw it again...... of course, there was no international coverage on it

Here are the links to the original reports in April 2015:


THAT  article was followed by a link to Simon Parkes news letter:

Welcome to the delayed October newsletter.  World events are moving at a speed that we have not seen for many years.  Most of my newsletter will be aimed at United Kingdom and America because this is where the future and the decisions will play out in a more public manner.
American readers doubtless will know that the Pope visited Capitol Hill and made his monumental speech.  Anyone with an ounce of sense would ask why would a religious man who does not speak for the Hindu’s, Muslims, Jews and indeed only speaks for one faction of Christianity; why would such a man be asked to speak on world topics and to do so not at the United Nations but at the seat of American government.  The answer of course is this was their new world order speech, they have fired the starting pistol and there is no going back.  What does this mean?  Well, it means that the negative elite are now debating which false flag to employ as a precursor to launching their version of the NWO.  I have been made aware of two of the possible false flags.  The first – the most dramatic; a low yield nuclear bomb in the ocean somewhere off the coast of mainland America with the intent of creating a 100 foot tidal wave to strike the eastern seaboard of the USA, remember this is not destined to happen it is what a small group of fanatics are considering.  In every other case they have been thwarted and there is no reason to believe that they would be successful.  Second debated option is the much vaunted false flag alien invasion.  This is their preferred option (I know many commentators have dismissed this but truly this is now back on the table).  This option offers a cheap alternative to obtaining individual sovereign government giving up their authority and accepting one world rule.  I would like to go into some detail here – if this option is chosen we can expect first generation triangle craft flying within small areas over the United States, programmed life forms P.L.F’s that will either be used in mock battles with mercenary soldiers dressed in American uniforms or one option that is being considered is a staged meeting between such P.L.F’s and the Pope.  Such option should not be discounted, this Pope, according to prophesy the last pope, has already you will remember offered to baptize aliens, I am sure this link is not lost on my readers.  Those of you who have seen my presentations will know I have shown photographs of British school children being conditioned to accept spacecraft crashing.  This is all part of the false flag agenda.

I don't "follow" Simon Parkes, but the info was interesting.

Dani Arnold-McKenny " I have been made aware of two of the possible false flags. The first – the most dramatic; a low yield nuclear bomb in the ocean somewhere off the coast of mainland America with the intent of creating a 100 foot tidal wave to strike the eastern seaboard of the USA,"
I have heard this for over three years. I was told that when a certain battle ship had a "training accident" off the coast of Boston just before Hurricane Sandy, that it was carrying a nuke and was "crippled" by the "good guys" before they could set it off.
Recently there was another rumor of a plan to set one off in the Gulf off the coast of Texas- the only reason I actually looked at that information was because the theorized "zone of devastation" actually mirrored the Deagle.com info.
But yes, this is a theory that I've been following for a LONG time.


Dani Arnold-McKenny "Second debated option is the much vaunted false flag alien invasion. This is their preferred option (I know many commentators have dismissed this but truly this is now back on the table). This option offers a cheap alternative to obtaining individual sovereign government giving up their authority and accepting one world rule. I would like to go into some detail here – if this option is chosen we can expect first generation triangle craft flying within small areas over the United States, programmed life forms P.L.F’s that will either be used in mock battles with mercenary soldiers dressed in American uniforms or one option that is being considered is a staged meeting between such P.L.F’s and the Pope. Such option should not be discounted, this Pope, according to prophesy the last pope, has already you will remember offered to baptize aliens, "
I have theorized this for years as well and I still believe very strongly that they will try to use this plan, in conjunction with a "second coming". Lisa and I have discussed this several times on the One people Roundtable Discussions.


OK, so so far we have reports of cities floating in the sky, and then Simon parks report, that while he doesn't mention "Project Blue Beam", that was definitely the first thing I though of- both when I originally reported on the Nigerian sighting of the floating city and this report from China.

I have theorized that this would be their "big play" for a long time- long before I had ever heard of "Project Blue Beam".  I'll get into this in a moment....

Then the very next article in the group was  a video by Daboo7 about NASA and their newest party trick:

If you’re on the east coast tonight, keep an eye on the sky between 7pm and 9pm: NASA is launching a test of some new tech that will include releasing colorful vapor tracers 130 miles above the Earth. It sounds like it’s going to be beautiful.
The vapors will be ejected from a sounding rocket launched from Wallops Flight Facility in Virginia. NASA explains that it has actually been injecting various vapor tracers into the atmosphere since the 1950s—these trails help scientists understand “the naturally occurring flows of ionized and neutral particles” in the upper atmosphere by injecting color tracers and tracking the flow across the sky.
Tonight, NASA says it’s ejecting four different payloads of a mix of barium and strontium, creating “a cloud with a mixture of blue-green and red color.” Here’s an example of a barium release provided by NASA; on the upper left you can see the barium’s “ionized component, which has become elongated along the Earth’s magnetic field lines.”

And here’s another tracer shot from a launch using lithium vapor and trimethyl aluminum over the Marshall Islands:

Helpfully, NASA also has a guide to which tracer chemicals produce what types of color, compared to fireworks:

The ejection technologies will include a deployment system for forming vapor clouds in space for wind and ionosphere studies and ejectable sub-payloads testing data transmissions between sub and main-payloads during suborbital rocket flights, primarily during auroral studies.
Hesh said, “These two technologies will allow researchers to make real-time onsite measurements over a much wider area and increase the amount of data obtained than is currently possible during a suborbital rocket flight.”
During the test of the deployment system for the vapor clouds, four sub-payloads with mixtures of barium and strontium will be ejected from the main payload and the vapor will be deployed while the payload is descending. The test also will include the release of vapor from two systems on the main payload during the descent portion of the flight.
The vapor tracer sub-payload deployment method being tested on this flight uses small rocket motors to eject the sub-payloads from the main payload.  The ejected sub-payloads will release the vapor at about 130 miles above the Earth. The main payload releases will occur at an altitude around 118 miles.

The barium-strontium mixture produces a cloud with a mixture of blue-green and red color.  The blue-green part is neutral, i.e. not charged.  Strontium is used to enhance the visibility of the neutral flow.

Red and white vapor clouds filled the skies over the Marshall Islands as part of NASA’s Equatorial Vortex Experiment (EVEX). The red cloud was formed by the release of lithium vapor and the white tracer clouds were formed by the release of trimethyl aluminum (TMA). These clouds allowed scientists on the ground from various locations in the Marshall Islands to observe the neutral winds in the ionosphere.

http://www.nasa.gov/multimedia/imagegallery/image_feature_2504.html
Soooooo..... here we have NASA ADMITTING to using Lithium in it's atmospheric testing!!  A bit more validation to the article I wrote last week : "Dosed Chemtrails: Have you had your Litium today?"

Would these injections of Lithium be the reason that we are suddenly seeing very "rare" Red
Aurora Borealis aka Northern Lights? 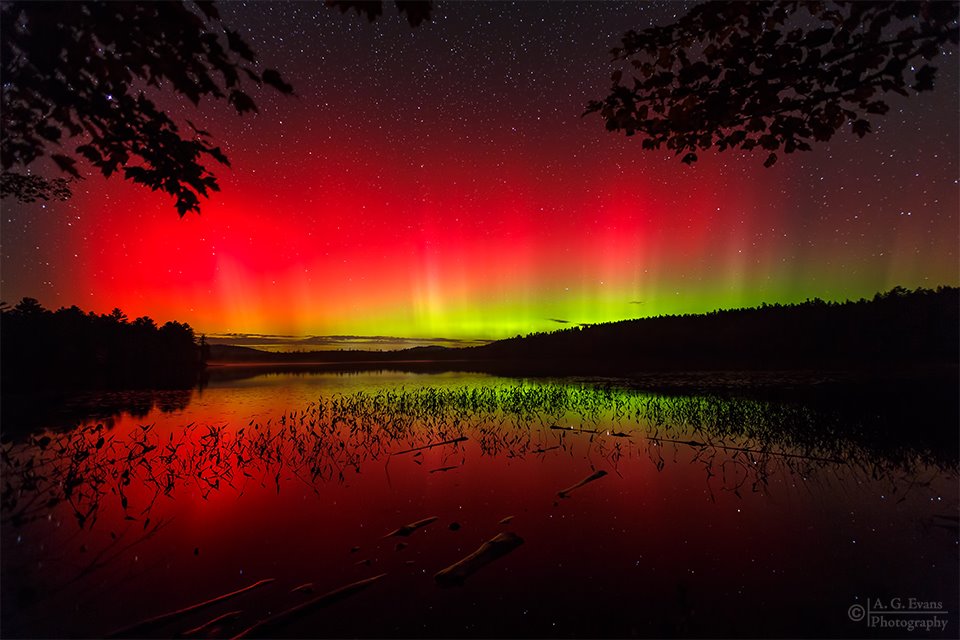 Is this the setting of the stage?  Is this NASA et al building and testing their giant screen for their next big "Movie" release, to play out their purported "Project Blue Beam"?   Or is this just a furthering of their chemical toxification of Humanity?

I theorized a few years ago, that "they" would create a "second coming" , most likely using the "ET" "Disclosure" as a back drop. .... what better way to tie all humanity up in one nice big bow?   Have a second coming that involves Space Ships and Aliens and you effectively gather up all the religious people, AND all the Science fiction/NASA people all at once..... and use that to create your "new" "New World Order".    Further to this thought is the huge amount of articles over the past 6 months especially, that have skirted around and hinted at the big "D" of "we are not alone in the Universe"....

.... I don't think it's going to work, mind you.   But it IS an interesting theory and one to watch.

Remember: it's not about "Fear" or "Falling for" their bullshit.  Watching these things planned and played out is an important aspect of SEEing this bullshit for what it is: