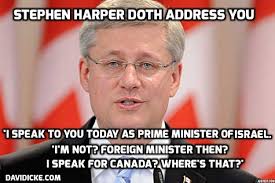 OTTAWA - Israel has expressed its gratitude to Canada for helping to block a major international plan towards ridding the world of nuclear weapons.
Elsewhere, however, there was widespread international disappointment that Canada and Britain supported the United States in opposing the document at the United Nations review conference of the Nuclear Non-Proliferation Treaty.
The document called on the UN to hold a disarmament conference on the Middle East by 2016. Such a conference could have forced Israel to publicly acknowledge that it is a nuclear power, something the Jewish state has never done.
Adopting the document would have required a consensus, but since none was reached, that means nuclear disarmament efforts have been blocked until 2020.
In a weekend phone call, Israeli Prime Minister Benjamin Netanyahu thanked Stephen Harper for what he called Canada's principled stand, Harper's office in Ottawa said in a statement.
"Prime Minister Harper reaffirmed Canada's commitment to disarmament and non-proliferation, including within the framework of the NPT," the statement said.
"He also stressed Canada's belief that a weapons-of-mass-destruction-free zone can only be truly effective if all countries in the Middle East participate freely and constructively in its establishment."
Foreign Affairs Minister Rob Nicholson said Canada's decision "sends a strong message about Canada's resolve not to compromise the integrity of a treaty to which we remain fully and deeply committed."
But there was widespread opposition and disappointment expressed by several countries that addressed the conference, which wrapped Friday after four weeks of meetings.
Austria, which spoke on behalf of 49 countries, said the result spoke to the wide divide over what nuclear disarmament should mean. "There is a realty gap, a credibility gap, a confidence gap and a moral gap."
The delegate to South Africa added: "There is a sense in which the NPT has degenerated into minority rule similar to what we had in South Africa under apartheid — the will of the few will prevail regardless of whether it makes moral sense."
It's disappointing that Canada helped scuttle the four weeks of negotiations that led up to Friday's result, said Beatrice Fihn, spokeswoman for the International Campaign to Abolish Nuclear Weapons, a coalition of 400 non-governmental organizations in 95 countries.
"Three countries take their cue from a non-state party — Israel isn't even part of the treaty — and thereby have this final say," Fihn said.
But former Liberal foreign affairs minister Lloyd Axworthy supported the Conservative decision, saying that dragging the Middle East issue into the talks was a ploy by some countries to embarrass Israel.
"There was a distinct effort, whether it was by Egypt or others, to present a package that they knew certain countries — including our own — would not agree with," Axworthy said in an interview.
"I wish there had been more countries saying so, with some of the NGOs so quick to condemn, because the reality is if you're going to do diplomacy it has to be feasible and realistic."
The United States accused Egypt and other countries of trying to "cynically manipulate" the review process.
Axworthy said the NPT conference missed a chance to deal with serious nuclear proliferation issues, including Iran's alleged pursuit of a nuclear weapon.
"The way in which the ongoing Middle East-Israeli-Palestinian issue was introduced into the package was clearly designed to be disruptive."
But New Democrat foreign affairs critic Paul Dewar accused the government of playing the role of international spoiler.
"When it comes to the Middle East, many have said this is the most dangerous place in the world to have nuclear weapons," said Dewar.
"If we can get other countries to abide by nuclear non-proliferation in the Middle East, then that can advance the cause globally."