The "Destruction" of US "Wealth", or "All I need to know about stocks I learned from Trading Places"

Well.... lets really take a closer look at this.

Chinese stocks DESTROY 45 billion in US wealth. That can mean a lot of different things, and this article itself is a glaring piece of fluff (Like most of the financial articles this week, lol). Most of the stocks mentioned in this article were pushed up in value at hyper speed since they started trading on the US market. Who made the money off of the inflation of the value of these stocks? Now,  "suddenly", their "value" is plummeting. Why? Because they are being sold off, or "dumped". So, who is making the money off of that?

Now..... if the hyper inflated "value" of these stocks was bogus to begin with- and we'll use the example of the several "billionaires" that lost their shirts in China over the past 8 months when their companies stocks were hyper inflated and then dropped radically in reflection of their true value-  the questions is the same: who made money off the hyper inflation of the stock prices to begin with? And then who made money off the crashing of those stock "values"? And Note the use of the word "Value" and "wealth" in this article..... not money.
The US financial media is pushing the "China is the problem" envelope as an explanation for all the current apocalyptic crashing that is happening in the western (actually, global)  financial arenas. Yet who were the ones pushing everyone to "Buy buy buy" in the China markets just over a year ago? Who were the ones selling the propaganda that "Investing in the new untouched market is the gold mine of the year!", pushing middle and lower end investors who had already taken a beating in the US markets to "test their luck" in the china markets? Now what has happened?
....basically these guys lost their shirts. But again, the question no one answers is: to whom? If we're talking about actual "money", it doesn't just disappear..... if someone "lost it" then it stands to reason that if was "found" by someone else. The question is: who found it nicely and neatly tucked into their pocket when they walked out of the trading arena?

All you ever needed to know about the current bullshit, you can learn simply by watching the movie "Trading Places".  Only......  it's not the "good guys" or the "under dogs" that are winning this one.

ps:  This also applies to "climate change spending " and "National debts", etc -  If someone has to PAY  a hundred billion in funding climate change policies..... that means someone will MAKE $100 billion.  If countries "owe" Trillions of dollars in "debt"..... who do they owe it TO? ..... Just sayin' 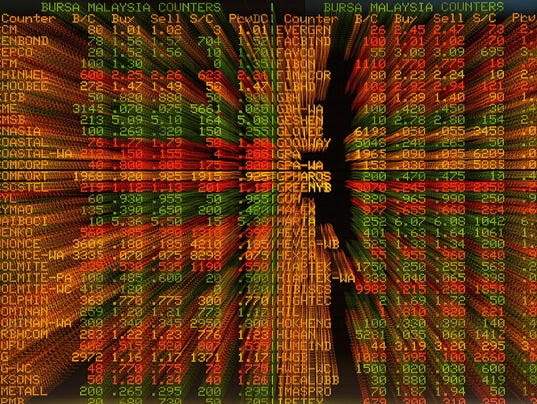 There might be one thing tougher for an American than learning to speak Chinese: Owning Chinese stocks.
The 141 Chinese-based companies with shares listed on a major U.S. exchange have shredded $45 billion in market value - just this year, according to a USA TODAY analysis of data from S&P Capital IQ. These stocks are already down 5.1% on average this year.
It's a stunning destruction in wealth that seems to only be getting started. The Shanghai Composite Index dropped 7.3% Thursday before trading was halted after less than an hour of trading. Investors are braced for more selling to continue. China's pain is also spreading into U.S. markets. The Dow Jones industrial average closed down 392 points to 16,514 Thursday and is off 4.8% this year.
Pain is already being felt - in a big way - by investors brave enough to buy into U.S.-listed shares of Chinese stocks.

Please note the bold quote below.... I just about fell of my chair laughing.  But, really.... what do you expect from American Media and Financial "Experts", lol


This isn’t a stock-market crisis; it’s an outright ‘selling stampede’

The market is currently in panic mode. Investors across the globe are wading in a sea of deep red, sparked by concerns about slumping global growth — otherwise known as China.....

Saut told MarketWatch he’s sanguine about the long-term prospects for U.S. stocks in the face of another plunge in China’s Shanghai Composite Index SHCOMP, +1.97%  and the subsequent trading halt. Hours after the market closed, Beijing suspended its so-called circuit breakers (which come into play if the market falls by a certain measure), but it isn’t clear whether that move will serve to calm the markets.....


“The U.S. has solved many of its long-term problems,” Saut said. “Banks are less leveraged, the deficit is under control, balance sheets are strong.” ....

Saut is "Sanguine" is he?  Interesting turn of phrase.  One might wonder if his optimism is due to his blood(line)?   Or is he just blushing profusely due to his outrageous lies that not even he can swallow?

(esp of the complexion) ruddy in appearance
3.


OH and here's the only point worth paying attention to in this Zerohedge article- again, note the underlined Bold sentence:

"It couldn't be worse," exclaims one manager who started his fund mid-year in 2015, blaming China's equity market carnage on its newly-created circuit-breakers (as opposed to the fact that the Chinese market trades at 64x P/E and there are sellers everywhere). "Panic will eventually turn into a buying opportunity," hopes one strategist while another proclaims "poorly-designed" circuit breakers need to be adjusted to 10% (seriously).