Obama the Troll, an Oily Economy, and the Ships that Didn't.

A Picture is Worth a Thousand Words!!!

Obama's State of the Union Address: "Anyone who says that the economy is declining is Lying" 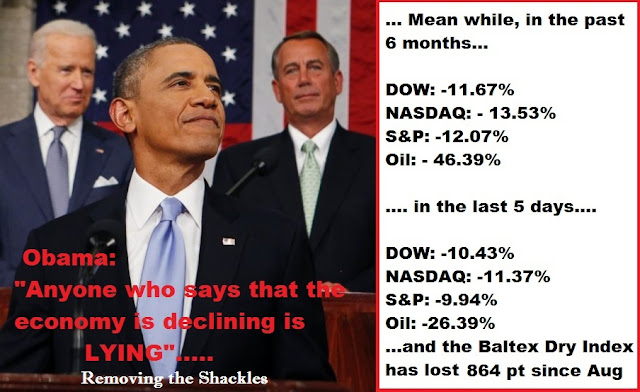 January 20, 2016 eClinik Learning 3 Comments
International cargo vessels today are all docked and anchored in most seaports all over the world, and the last trips they may have had were for the December holidays shopping spree.
As of yesterday, the most prominent global indicator for international shipment of physical goods, the London-based Baltic Dry Index, is in free fall.

For the last six months or so, most cargo container ships were already sailing with less than their full capacity.
The physical economy is crashing and all the warnings that’s been relayed to you for the last four years should have prepared you for what’s to come in the interim.
There may be a short disruption on the supply of critical goods and services especially on areas that are fully industrialized.

“Today, Monday, January 18 2016, the Baltic Dry Index decreased by 4 points, reaching 369 points.
Baltic Dry Index is compiled by the London-based Baltic Exchange and covers prices for transported cargo such as coal, grain and iron ore. The index is based on a daily survey of agents all over the world. Baltic Dry hit a temporary peak on May 20, 2008, when the index hit 11,793. The lowest level ever reached was on Monday, January 18 2016, when the index dropped to 369 points.”
Source: Hellenic Shipping News Worldwide....

......This unfolding event in the physical economy is reminiscent of the event back in the early part of 2012 when CEOs of global banking resigned en masse.
This is one more proof that the plan to end the Great Con Game perpetrated by the Khazarian Mafia for centuries will be terminated this year as much as possible.
Earlier, China had instructed its banks to stop buying US dollar and instead gradually unload its dollar reserves. The Chinese Central Bank also demanded that the Yuan will be the only currency they will accept and honor from hereon, with the exception only where sovereign currency swap agreements are in effect. This means that those countries which don’t have such similar arrangement with China will suffer financially unless their currencies are proven to be backed up with hard assets.....

.....It’s no coincidence that China is struggling desperately to contain a stock implosion.  Reportedly, banks have been told they are forbidden to buy US dollars and numerous Chinese billionaires have gone missing.  And the markets have just opened on Monday and are again deeply in the red.
Here at The Dollar Vigilante we’ve specialized in explaining the reality of the global faux-economy and why it’s important that you not believe mainstream media lies.
In the meantime, keep your eye on this shipping story!  If it is true and worldwide shipping is disastrously foundering, it’ll only be a matter of days before grocery store shelves will reflect that with increasingly bare shelves.
Are people upset now? Just wait. Interruptions in goods and services, most critically food, almost happened in 2008 during the Great Financial Crisis.  For three days worldwide shipping was stranded due to shipping companies not knowing whether or not the receiver’s bank credit was good.....

.....To confirm reports on the internet of a shipping freeze, this writer called NYK lines, a major international shipping firm, and was told “we cannot speak for the whole world but, as far as our company is concerned, with current shipping prices we will lose money every time we send a ship so we have stopped.” Chinese government sources told this newsletter shipping companies are now demanding to be paid in Chinese yuan and not dollars and that is a major reason for the freeze in shipping worldwide. If this continues, it will lead to empty super-market shelves and social unrest, especially in the US. The announcement last week by Walmart that it is closing 269 stores is just the beginning.”

To read the Entire Article:  http://geopolitics.co/2016/01/20/international-shipping-shuts-down-baltic-dry-index-freefalling/


The North Dakota Crude Oil That's Worth Almost Nothing

... actually, LESS than nothing to be exact.  N Dakota sour crude hit -$0.50 a barrel two days ago.  Yes, that's exactly what it means:  they are now having to PAY people to take their oil fifty cents a barrel!!!

The Oil Crash Of 2016 Has The Big Banks Running Scared

"Since the start of 2015, 42 North American oil companies have filed for bankruptcy, 130,000 good paying energy jobs have been lost in the United States, and at this point 50 percent of all energy junk bonds are “distressed” according to Standard & Poor’s.  As you will see below, some of the big banks have a tremendous amount of loan exposure to the energy industry, and now they are bracing for big losses.  And the longer the price of oil stays this low, the worse the carnage is going to get......

Iran has been carefully planning for its return from the economic penalty box by hoarding tons of oil in tankers at sea.
Now that the U.S. and European Union have lifted some sanctions on Iran, the OPEC country can begin selling its massive stockpile of oil.
The sale of this seaborne oil will allow Iran to get an immediate financial boost before it ramps up production. The onslaught of Iranian oil is coming at a terrible time for the global oil markets, which are already drowning in an epic supply glut.


If you can't blame China, you can now Blame Iran!!!!!   Of course the fact that almost every country around the world and most of the heavy hitters in the financial realms have been hoarding every ship tanker, railroad tanker, truck tanker they can find with OIL for the past year ..... no, just ignore that and point a finger at Iran.   And of course, the fact that just two weeks before the International sanctions against Iran were lifted, Obama lifted a 40 year ban on US oil Exports..... no just ignore that glaring addition to the glut of oil on and already swamped international market.....


Big banks are cringing as crude oil is crumbling.

Now that the oil glut has caused prices to crash below $30 a barrel, turmoil is rippling through the energy industry and souring many of those loans. Dozens of oil companies have gone bankrupt and the ones that haven't are feeling enough financial stress to slash spending and cut tens of thousands of jobs.
Three of America's biggest banks warned last week that oil prices will continue to create headaches on Wall Street -- especially if doomsday scenarios of $20 or even $10 oil play out.


A Glimpse Of Things To Come: Bankrupt Shale Producers "Can't Give Their Assets Away"

So in short: the bankruptcies are piling up and the assets securing the sector's financing are essentially worthless now that crude is basically free.
Got it.
But banks and lenders needn't be concerned. After all, America's long list of cash flow negative producers are "only" sitting on $325 billion in debt.

Prospect of the Islamic Republic pumping an additional 500,000 barrels a day sends stock markets in Dubai and Saudi Arabia into tailspin
Stock markets across the Middle East saw more than £27bn wiped off their value as the lifting of economic sanctions against Iran threatened to unleash a fresh wave of oil onto global markets that are already drowning in excess supply

Is it time to bail out the U.S. oil industry?

And here's a little reminder of what we talked about back in December 2015... oh so long ago...

... and yet, it has been quite difficult to nail any of these Big Banks down to a precise figure of exactly HOW MUCH of those derivatives are in the Energy Sector and about to implode with the price of oil.....


And finally, along with the collapse of the oil industry and oil driven economies (ie: all of them), we have the collapse of a huge amount of global currencies.  The demise of Canada's Loonie has been hot on everyone's lips, with multiple articles and news stories about sky rocketing food prices in the land of the Canuck....but the vast majority of the American based articles keep tsk tsk tsking and pointing up north with heavy sighs of "OH what a shame", yet they are seemingly missing the writing on their own wall.  Think that $8 Cauliflowers are just a Canadian problem?  Think that $53.00 for 10kg of flour is just a weird Canadian price anomaly?   Yea..... Think again.

With global shipping all but at a stand still, with a raging drought in California- the US's number one winter produce state- and a Baltex Dry Index that is in free fall (meaning that international shipping has radically dropped and is continuing to drop day after day), and major retail outlets closing left right and center, it's only a matter of time before $8 Cauliflowers are going to be slapping the US consumer right in the pocket as well.

You know, there's an old adage, that when you have a problem with 50 other people.... then YOU are the problem.

When over a hundred and fifty countries are having massive economic problems due to their currencies "collapsing" in comparison to the US dollar.... then the problem is with the US Dollar.


.... What remains to be seen now, is just how long it will be before the other countries realize (Publicly) where the problem exists. .....

... Oh wait!  Would THAT be what we are seeing at the moment?  Countries NOT selling to the US?  Countries NOT using the US Dollar for international trade?
OH!  One final article:

Does this make Obama the highest paid internet troll on the planet?

Email ThisBlogThis!Share to TwitterShare to FacebookShare to Pinterest
Labels: Anyone who says that the economy is declining is Lying, collapse of the American economy, falling price of oil, global economic collapse, obama state of the union, oil producer bankrupt