The past 48 hours have definitely had a ring of Deja Vu going on in the realms of  our finicky Sun.


In the past 72 hours approximately, we've had 12 M Class flares according to Solarham, and yet Watchers is telling us that there have been 17 M Class flares ALL from spot 1967, between 1am Feb first and 9am Feb second, plus an assortment of C Class flares from both 1967 & 1968.  1967 is currently Beta Gamma Delta, and 1968 is Beta Gamma.

Watchers notes 3 CMEs that have also been observed:


Now here is where the "Deja Vu" enters the picture.  If you will remember to the last time old spot 1944 & 46 were almost directly earth facing, they were putting on a grand light show:

On Wed I published a Solar Update HERE, mostly focused on the X class flare from spot 1944 and the predicted upcoming geomagnetic storm caused by the CME (Coronal Mass Ejection) generated by the X Flare.

"NOAA is giving a risk 80% of M Class and 50% of X Class flares for today.... I'm going to go out on a limb and say that I give it 100% chance of an MClass flare today from 1944/6, and I expect we'll see 1946 evolve into Beta Gamma Delta in the next 24-48 hours as well.  We also have a good size Coronal Hole currently rotating into direct Earth View- the Solar Wind stream from that should reach earth Jan 12/13th."

....As I said in an earlier post a little while back about solar activity- for two years I have watched the same thing happen over and over again:  a major sun spot, throwing off huge flares, rotates into geoeffective Earth view and suddenly.... it just fizzles out.  Goes silent.  Then as it rotates around the western limb, then POW  it flares up again.

Same thing again this week.  Spot 1944 should of continued with strong M and even X Class flares.  It was so close to 1943 that they were almost touching.....  The fact that NOAA gave a risk of  90% for M Class and 50% for X Class flares, shows that that IS what should of happened.  And it didn't.  Instead, everything just went silent.

Sound familiar?  AGAIN?!?   AGAIN?!  I'm thinking that we are stuck in some sort of strange solar Ground Hog day loop, where the same solar events just keep repeating in the same pattern, as if stuck in a time vortex....


Well, yesterday was ground hog day again my friends....  the question is:  Will Sol repeat the same performance again this time around?   If it does I might just join Sol in a good ol' fashion tantrum instead of just questioning.


Oh and did I mention?  Just like last time round, we've also got a nice good sized coronal hole rotating into view as well. 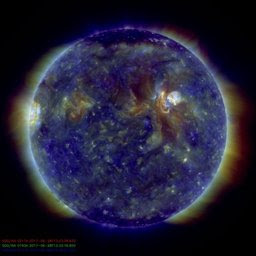 I don't know about you guys, but I'm beginning to feel a lot like Bill Murray..... 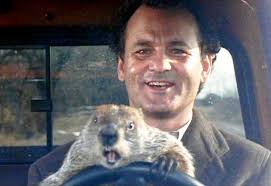