I know it's not my usual sort of post, but this gave me a giggle.  This is the sort of transparency that is really quite INlightening when you look at it.

This is about the 4th article I've read in the past 48 hours where the .01% are whining that they are being picked on.  No seriously!  They are!  We are just so mean to them, and they just don't "get it".... apparently.

... Much like Marie Antoinette upon learning that the peasants had no bread

One-Percent Jokes and Plutocrats in Drag: What I Saw When I Crashed a Wall Street Secret Society 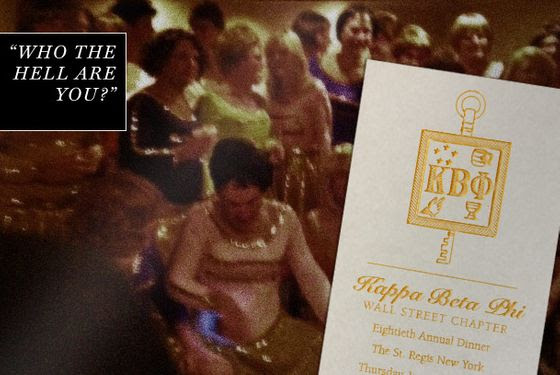 Recently, our nation’s financial chieftains have been feeling a little unloved. Venture capitalists are comparing the persecution of the rich to the plight of Jews at Kristallnacht, Wall Street titans are saying that they’re sick of being beaten up, and this week, a billionaire investor, Wilbur Ross, proclaimed that “the 1 percent is being picked on for political reasons.”
Ross's statement seemed particularly odd, because two years ago, I met Ross at an event that might single-handedly explain why the rest of the country still hates financial tycoons – the annual black-tie induction ceremony of a secret Wall Street fraternity called Kappa Beta Phi.

It was January 2012, and Ross, wearing a tuxedo and purple velvet moccasins embroidered with the fraternity’s Greek letters, was standing at the dais of the St. Regis Hotel ballroom, welcoming a crowd of two hundred wealthy and famous Wall Street figures to the Kappa Beta Phi dinner. Ross, the leader (or “Grand Swipe”) of the fraternity, was preparing to invite 21 new members — “neophytes,” as the group called them — to join its exclusive ranks.

Looking up at him from an elegant dinner of rack of lamb and foie gras were many of the most famous investors in the world, including executives from nearly every too-big-to-fail bank, private equity megafirm, and major hedge fund. AIG CEO Bob Benmosche was there, as were Wall Street superlawyer Marty Lipton and Alan “Ace” Greenberg, the former chairman of Bear Stearns. And those were just the returning members. Among the neophytes were hedge fund billionaire and major Obama donor Marc Lasry and Joe Reece, a high-ranking dealmaker at Credit Suisse. [To see the full Kappa Beta Phi member list, click here.] All told, enough wealth and power was concentrated in the St. Regis that night that if you had dropped a bomb on the roof, global finance as we know it might have ceased to exist.

During his introductory remarks, Ross spoke for several minutes about the legend of Kappa Beta Phi – how it had been started in 1929 by “four C+ William and Mary students”; how its crest, depicting a “macho right hand in a proper Savile Row suit and a Turnbull and Asser shirtsleeve,” was superior to that of its namesake Phi Beta Kappa (Ross called Phi Beta Kappa’s ruffled-sleeve logo a “tacit confession of homosexuality”); and how the fraternity’s motto, “Dum vivamus edimus et biberimus,” was Latin for “While we live, we eat and drink.”

On cue, the financiers shouted out in a thundering bellow: “DUM VIVAMUS EDIMUS ET BIBERIMUS.”

The only person not saying the chant along with Ross was me — a journalist who had sneaked into the event, and who was hiding out at a table in the back corner in a rented tuxedo. 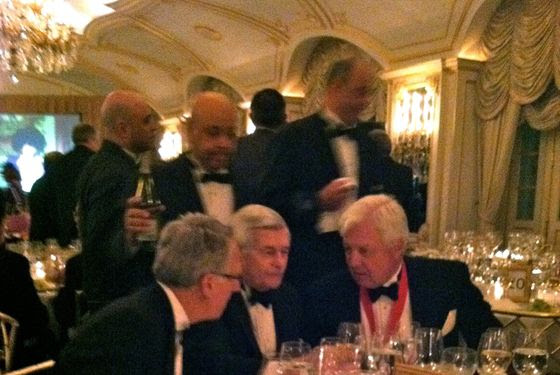 Several Kappas at the table next to me, presumably discussing the coming plutocracy.
I’d heard whisperings about the existence of Kappa Beta Phi, whose members included both incredibly successful financiers (New York City's Mayor Michael Bloomberg, former Goldman Sachs chairman John Whitehead, hedge-fund billionaire Paul Tudor Jones) and incredibly unsuccessful ones (Lehman Brothers CEO Dick Fuld, Bear Stearns CEO Jimmy Cayne, former New Jersey governor and MF Global flameout Jon Corzine). It was a secret fraternity, founded at the beginning of the Great Depression, that functioned as a sort of one-percenter’s Friars Club. Each year, the group’s dinner features comedy skits, musical acts in drag, and off-color jokes, and its group’s privacy mantra is “What happens at the St. Regis stays at the St. Regis.” For eight decades, it worked. No outsider in living memory had witnessed the entire proceedings firsthand. 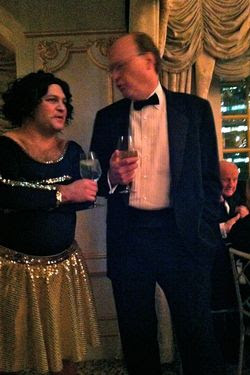 A Kappa neophyte (left) chats up a vet.
I wanted to break the streak for several reasons. As part of my research for my book, Young Money, I’d been investigating the lives of young Wall Street bankers – the 22-year-olds toiling at the bottom of the financial sector’s food chain. I knew what made those people tick. But in my career as a financial journalist, one question that proved stubbornly elusive was what happened to Wall Streeters as they climbed the ladder to adulthood. Whenever I’d interviewed CEOs and chairmen at big Wall Street firms, they were always too guarded, too on-message and wrapped in media-relations armor to reveal anything interesting about the psychology of the ultra-wealthy. But if I could somehow see these barons in their natural environment, with their defenses down, I might be able to understand the world my young subjects were stepping into.

So when I learned when and where Kappa Beta Phi’s annual dinner was being held, I knew I needed to try to go.

Getting in was shockingly easy — a brisk walk past the sign-in desk, and I was inside cocktail hour. Immediately, I saw faces I recognized from the papers. I picked up an event program and saw that there were other boldface names on the Kappa Beta Phi membership roll — among them, then-Citigroup CEO Vikram Pandit, BlackRock CEO Larry Fink, Home Depot billionaire Ken Langone, Morgan Stanley bigwig Greg Fleming, and JPMorgan Chase vice chairman Jimmy Lee. Any way you count, this was one of the most powerful groups of business executives in the world. (Since I was a good 20 years younger than any other attendee, I suspect that anyone taking note of my presence assumed I was a waiter.)

I hadn’t counted on getting in to the Kappa Beta Phi dinner, and now that I had gotten past security, I wasn’t sure quite what to do. I wanted to avoid rousing suspicion, and I knew that talking to people would get me outed in short order. So I did the next best thing — slouched against a far wall of the room, and pretended to tap out emails on my phone. 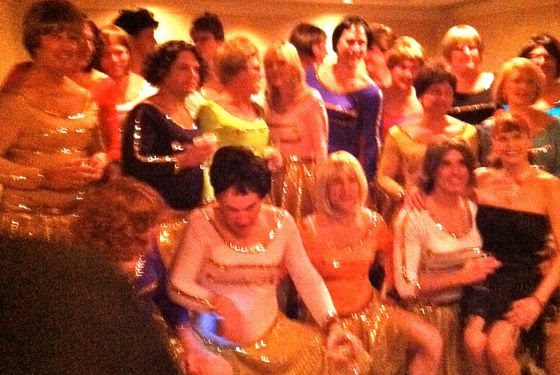 The 2012 Kappa Beta Phi neophyte class.
After cocktail hour, the new inductees – all of whom were required to dress in leotards and gold-sequined skirts, with costume wigs – began their variety-show acts. Among the night’s lowlights:

• Paul Queally, a private-equity executive with Welsh, Carson, Anderson, & Stowe, told off-color jokes to Ted Virtue, another private-equity bigwig with MidOcean Partners. The jokes ranged from unfunny and sexist (Q: “What’s the biggest difference between Hillary Clinton and a catfish?” A: “One has whiskers and stinks, and the other is a fish”) to unfunny and homophobic (Q: “What’s the biggest difference between Barney Frank and a Fenway Frank?” A: “Barney Frank comes in different-size buns”).

• Bill Mulrow, a top executive at the Blackstone Group (who was later appointed chairman of the New York State Housing Finance Agency), and Emil Henry, a hedge fund manager with Tiger Infrastructure Partners and former assistant secretary of the Treasury, performed a bizarre two-man comedy skit. Mulrow was dressed in raggedy, tie-dye clothes to play the part of a liberal radical, and Henry was playing the part of a wealthy baron. They exchanged lines as if staging a debate between the 99 percent and the 1 percent. (“Bill, look at you! You’re pathetic, you liberal! You need a bath!” Henry shouted. “My God, you callow, insensitive Republican! Don’t you know what we need to do? We need to create jobs,” Mulrow shot back.)

• David Moore, Marc Lasry, and Keith Meister — respectively, a holding company CEO, a billionaire hedge-fund manager, and an activist investor — sang a few seconds of a finance-themed parody of “YMCA” before getting the hook.

• Warren Stephens, an investment banking CEO, took the stage in a Confederate flag hat and sang a song about the financial crisis, set to the tune of “Dixie.” (“In Wall Street land we’ll take our stand, said Morgan and Goldman. But first we better get some loans, so quick, get to the Fed, man.”)

A few more acts followed, during which the veteran Kappas continued to gorge themselves on racks of lamb, throw petits fours at the stage, and laugh uproariously. Michael Novogratz, a former Army helicopter pilot with a shaved head and a stocky build whose firm, Fortress Investment Group, had made him a billionaire, was sitting next to me, drinking liberally and annotating each performance with jokes and insults.

“Can you fuckin’ believe Lasry up there?” Novogratz asked me. I nodded. He added, “He just gave me a ride in his jet a month ago.”

The neophytes – who had changed from their drag outfits into Mormon missionary costumes — broke into their musical finale: a parody version of “I Believe,” the hit ballad from The Book of Mormon, with customized lyrics like “I believe that God has a plan for all of us. I believe my plan involves a seven-figure bonus.” Amused, I pulled out my phone, and began recording the proceedings on video. Wrong move. 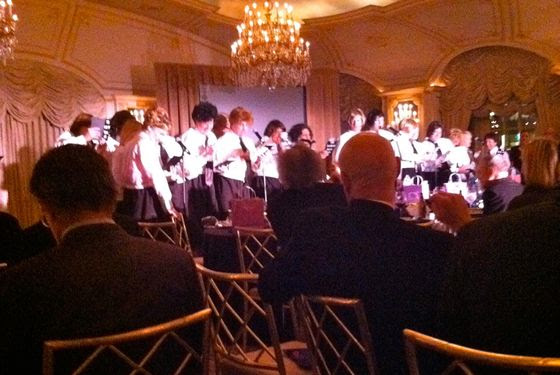 The grand finale, a parody of "I Believe" from The Book of Mormon
“Who the hell are you?” Novogratz demanded.

I felt my pulse spike. I was tempted to make a run for it, but – due to the ethics code of the New York Times, my then-employer – I had no choice but to out myself.

Novogratz stood up from the table.

"You’re not allowed to be here," he said.

I, too, stood, and tried to excuse myself, but he grabbed my arm and wouldn’t let go.

“Give me that or I’ll fucking break it!” Novogratz yelled, grabbing for my phone, which was filled with damning evidence. His eyes were bloodshot, and his neck veins were bulging. The song onstage was now over, and a number of prominent Kappas had rushed over to our table. Before the situation could escalate dangerously, a bond investor and former Grand Swipe named Alexandra Lebenthal stepped in between us. Wilbur Ross quickly followed, and the two of them led me out into the lobby, past a throng of Wall Street tycoons, some of whom seemed to be hyperventilating.....