AS OF JUNE 30, 2015
AMENDMENT NO. 3
For reporting purposes, substitute the following rates of exchange for August and September 2015 transactions.
COUNTRY--CURRENCY F.C. TO $1.00

This US Treasury Amendment is giving the China Renminbi an exchange rate of 2982.4000 to $1USD

And this link to the US Treasury Dept

Treasury Reporting Rates of Exchange as of June 30, 2015


One of the very first questions I asked when I read and watched the news reports when the Tainjin China explosion occured was:

.... Why were firemen already at the scene?

I was quickly sidetracked by a multiple other pieces of info and disinfo on the whole mess, and didn't really think about it again.  Until this article came out today.  A firefighter is found trapped under the rubble 32 hours AFTER the explosion.   If he was trapped UNDER the RUBBLE.... that means that he had to have been there BEFORE the explosion.  Hence, he was found 32 hours AFTER.  One of the main news stories that came out in the western media, mentioned that a lot of the dead and injured people were firefighters- which is what triggered by original question.

Why would the Fire Dept already be on the scene?  Unless, of course, there was already a fire going on, BEFORE the explosions?

Another rather blatant hint- from the IBT:

China's state-run newspaper People's Daily put the death toll at 55 on Friday. Over 700 people were injured in the blasts, 71 of them critically, and at least 18 people are listed as missing. Fires from the blasts were still burning Friday and chemical and nuclear material specialists from China's military were on site, to clear hazardous materials that are believed to have been responsible for the blasts.
The discovery of the missing firefighter alive in the rubble of the blast occurred at 7:05 a.m. local time (7:05 p.m. EDT, Thursday), but was not made public until a news conference later in the day. The man appeared badly burned in photos shared by authorities on social media, and his being found alive was a rare positive development in the crisis, which began with explosions at a chemicals- and gas-storage facility late Wednesday.

From the article I posted out the night of the explosion:


The editor of the BBC's Chinese Service, Raymond Li, says all indications are that it is an industrial accident.
State broadcaster China Central Television (CCTV) said a shipment of explosives had detonated but this was not confirmed.

All of these cars are still perfectly lined up, none are blown over, or into each other.  The fire damage is beyond a simple "fire"- the glass in the front windshield has melted.  These cars have been hit with extreme heat, extremely fast- yet were not moved by any explosive force. 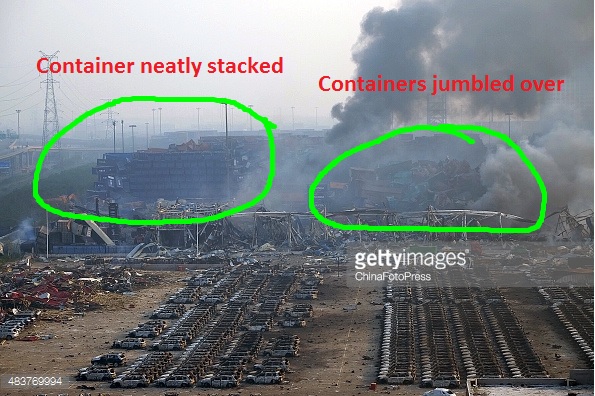 Behind and to the right of the "explosion", containers are still perfectly stacked.  To the Left, containers are tossed everywhere, like kids building blocks.  And in front, the rows of cars are completely burned out.

And Then there is the Super Computer:

Chinese news publication Xinhuanet reports that on Wednesday, Liu Guangming, the director of the National Supercomputing Center in Tianjin, shut down the supercomputer Tianhe-1A, which was just kilometers from the blast’s epicenter.
Though Tianhe-1A continued to run smoothly post-blast, the shockwaves from the twin explosions caused windows to shatter and the ceiling to collapse at the National Supercomputing Center.
Xinhuanet, citing Guangming, reported that the supercomputer and its database had remained intact owing to its location in a specially reinforced computer room. However, careful not to take any security precautions, Guangming and his staff decided to shut down the machine 30 minutes after the blast due to “security reasons,” according to Xinhuanet.
The Tianhe-1A is housed at the National Supercomputing Center in Tianjin. It was developed by the Chinese National University of Defense Technology (NUDT) and was recognized as the world’s fastest computing system in 2010. (D: it's still rated #2 in the world- #1 is also in China)  It is one of the world’s few petascale computers (a system capable of one quadrillion floating point operations per second), and is said to have the processing power of 175,000 laptopscombined.
The supercomputer has been used for scientific research and weather forecasting, as well as for military purposes. The Tianhe-2 housed in the National Supercomputer Center in Guangzhou currently holds the title as fastest supercomputer in the world.
http://motherboard.vice.com/en_uk/read/chinas-supercomputer-is-shut-down-following-tianjan-blast

.... Since when does a government need a Super Computer to Forecast the Weather?!
Now, let's talk about that which is not being talked about, with regards to this explosion in Tainjin:


Three days ago China Devalued it's currency... then again two days ago.  This started the Mass Media Hysteria of "Currency War".   Then today... magically, China revalued their currency again- this time Upwards by .5%.  Add  to this Zerohedges comments this morning:


Putting what China has just done in very simple context: China announces an increase in its gold holdings of over 58% in the past two months... and then this past week it devalues its currency by nearly 5% in just three days.

China's Markets have been falling and falling with little green to be seen... even with the Government threatening, passing new laws, and blatantly propping up the markets.....

But the Biggest bomb by (not western) Main Stream Media, was this article in Sputnik:

What the Latest Currency War is All About

When the US embarks on perennial quantitative easing, that's OK. When the EU does QE as well, that's OK. But when the Bank of China decides it's in the best interest of the nation to let the yuan go down a bit instead of infinitely up, that's Armageddon.

It took the Bank of China to devaluate the yuan on two consecutive days — moving within the 2 percent band that it's allowed to — for the proverbial global financial banshees to go completely bonkers.
Forget the hysteria. The heart of the matter is that Beijing has stepped on the gas in a quite complex long game; to liberalize the yuan exchange rate; allow it to free float against the US dollar; and establish the yuan as a global reserve currency.
So this is essentially exchange rate policy liberalization — not a currency "war", as the frenetic spin goes from Washington/Wall Street to Tokyo via London and Brussels.

...And one final piece to add to this report tonight:

CENSORED: Tianjin China Blast, 200 went in only four came out