The Untangled Gathering: Fall of the Empire Symposium 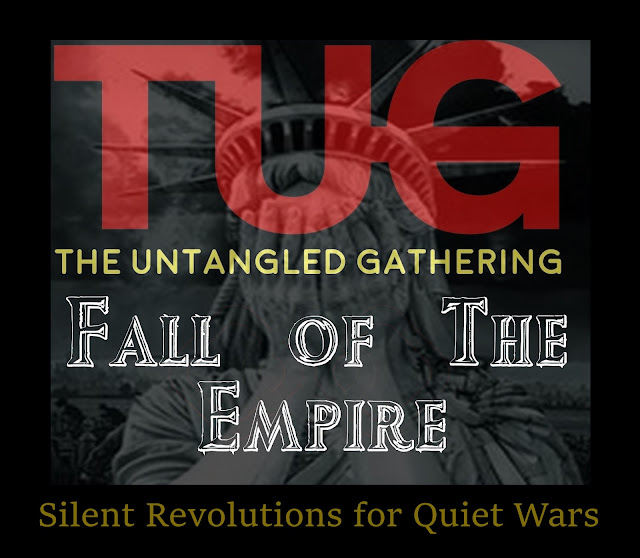 
For many people, September 11, 2001 sounded a death knell across the planet, as the beginning of the end of the "Land of the Free".  Much like the Reichstag Fire of 1933 that Hitler used to catapult the Third Reich into ultimate power over the German people, so too the false flag attack of 9/11 was used by the American Government  and it's Controllers, to launch the Patriot Act, the NDAA, the creation of Homeland Security, and marked the beginning of a "War on Terror" that laid bare the false pretenses of "Freedom & Democracy".

But this is not just an "American thing".  The shot that was heard around the world that day signaled a massive shift by all the EU, and NATO Nations.

We are now living in a police state.  A state that has taken away any and all perceived "Rights", no matter what Constitution or Declaration of Human Rights you follow.  The corporate entities that are pretending to be "Government" have sold humanity to the Corporate Controllers, under the guise of "Safety & Security", and the Main Stream Media are the whore and court jesters, who spread their disease of Fear, and words of Deception and outright lies.

Drugged and Doped, the vast majority of people live in a world of Distraction & Disinformation, feeding from the teat of the TV telling them Tall Tales.   Distraction has become a high art form, that is fed through social media.

While quietly, unreported and unrecognized, governments are signing laws to take away our Freedoms, the financial system is crashing, and the world stands on the precipice of WAR.

.... Yet the "WAR" began long ago, with the forming of the Corporate Empire.


I would like to invite you to join us for:


We have brought together a group of speakers from many backgrounds and focus points, to bring their knowledge and ideas forward to the public.  Outlining the current situations in the US, and the responses and reactions of their corporate friends, looking at what is going on in the background:  Politically, Financially, Legally, and Socially.  It's time to bring the puzzle pieces together, to discuss this moment of NOW.  This moment of time, IN Time, that has humanity standing on the very edge of the knife.  A secret war is being waged against the people of this planet, Silent Weapons used against the people, in Quiet Wars.

We look for the answers, We come together to uncover the truth, and we move forward.

With perhaps a few surprise guests ....


The Untangled Gathering is an online Conference and Symposium stage, Broadcast LIVE Stream on CCN- the Conscious Consumer Network.:


If you want to stay on top of the latest Untangled Gathering Events and News, Please "like" our TUG facebook page