Now.... this is interesting!   American Kabuki/Bill's article today is dead on the money (and funny as hell to boot!).  As a little lead in to this article I'll copy the conversation I just posted in my skype ONE room:|

-between around 2pm till about an hour ago, (*6pm) multiple heavy military helicopters go over head- heading in the same direction as the convoys (towards Oued Louw direction)

-yesterday bill spots "police" with some military type radar thingy at the end of the street.  we have no internet from midday till almost midnight.

bill's message on skype to me yesterday:

Last week a group of us took a car trip over to the Atlantic side for the day.  While we were on the road, we passed two large military convoys, with at least 10-15 military truck each, and another convoy of pristine brand spankin' new 18 wheeler transport trucks- no markings on them at all... all escorted by police and military (unmarked) cars.  The convoys were all heading towards Tetouan.  For ease of visualization, I marked the mentioned areas on the map below.

My last side note:  I'll be watching for a false flag in the Rif Mountains...... it kinda looks like that's what "they" are gearing up for.  Or is it a threat against the Moroccan government .... perhaps someone trying to force the kings hand? hmmmmmm..... time to keep an eye on the local news I think. 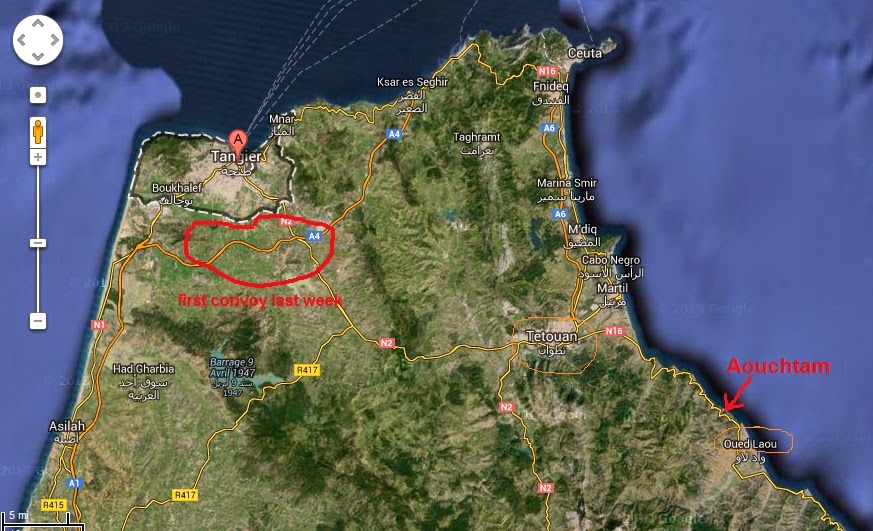 What a load of bollocks.... Magharebia.com...
US Military Web site for Northern Morocco

"The nine most terrifying words in the English language are:
'I'm from the government and I'm here to help.'"
- President Ronald Reagan

There's a very curious web site about the Rif mountain region which encompasses Northern Morocco, Tunisa and Algeria.  Its very well written with very professional graphics and web site. And its run by US Miiltary's African Command out of Germany (plainly stated in the ABOUT page on the site).  The web server is a cloud based service and the DNS server is in San Diego.    But there's been a very interesting trend lately trying to paint Morocco as a hot bed of ISIS activity and recruiting... pardon me while I laugh!   The only "illegal activity" here in the Rif is a hell of lot of pot growing in the mountains some of it owned by very influential Moroccans. And well these days, that's legal in many places in the good ol' US of A, thanks to some well funded campaigns by Monsanto (they have GMO pot strains you see...).

(Just had an attack helicopter fly over... how interesting...  Yesterday it was a blackhawk with pontoons.)

Things are getting down to the final moments, and prior to doing something really stupid... governments have to build a case... enter the terrorist card... and like the fictional accounts created in Syria, which appeared on European and American TV with crisis actors (a Russian friend here was in the Armenian section of Syria that Euronews said had fighting and there was none!). YouTube is replete with other bogus news footage from Syria that made the case for funding insurgents.

What this region is relatively free and peaceful.  And the locals here...well they like Americans a whole lot more than they like Europeans.  The French don't treat Moroccan immigrants all that well (I lived in a city in France in 1990 working for the SNCF railway that had loads of Moroccans), including those that collaborated with them and were in the Foreign Legion in service to their "protectors". Spain is just as bad, take a flight to Morocco from either Madrid or Barcelona and you have to go to remote terminal and then take a bus to a far off location on the runway. Not convenient.  Morocco kicked out the French and Spanish occupiers, and this region kicked out the Spanish all on their own!  Darn independent lot here in the Rif.  (More blackhawks fly over...)

In short... these people are happy that Morocco is peaceful, and friends with the United States.  They don't want to be the next Libya.

I'll mark my comments below with the attached article....


Below is the article:

Notice the correspondent doesn't even live in the region....


News about a Moroccan national who leads an Islamic State (ISIS) brigade in Syria is raising talk about Islamist jihadists in northern Morocco.

Mohamed Hamdouch, a 28-year-old jihadist who is also a member of the Islamic council of the organisation, appeared in a video cutting off the heads of five people.
Before fighting in Syria, he ran a clothing business in Fnideq and was recruiting jihadists from the area.

Fnideq is adjacent to the Spanish enclave in Morocco known as Ceuta.  Its largely a border town that sells cut rate clothing and blankets brought over the border from Ceuta (which is basically a penisula sized duty free store - and a pretty good one at that - we get our beer there!)

(text from image of unknown origin) [AFP/Ho/Al-Itisam Media] Fighters for the Islamic State (ISIS) terror group, such as these shown in a June photo posted on a jihadist website, come from Morocco and other countries.

A fortnight ago, Moroccan security services also arrested a French jihadist in Tangier for seeking to recruit fighters and send them to organisations loyal to al-Qaeda.
Analysts say that northern Morocco has become a fertile breeding ground for radicalisation.

According to Human Rights Defence Association Chairman Lahbib Haji, the region is more conservative than elsewhere in Morocco.

Yeah that tends to happen when you have crappy internet connections and can't keep up with the rest  of the world....

"Furthermore, they are permanently in contact with Moroccans who have settled in Europe.  (that's called "extended family"...doh! We Americans have forgotten what it was like to have extended families) That makes it easier to recruit them," the Tetouan barrister said. The cells recruit members from underprivileged areas, he noted. (that's pretty much most of Northern Morocco! Not that they want it to stay that way!)

"The northern region has been neglected, if not completely forgotten, since independence," he said.

Yes...this is very true. Most of the money goes to the big cities. Its also an autonomous region run by tribal elders...

"What also sets the north apart from the interior of the kingdom is the lack of zawiyas, (brotherhoods), which are centres for spirituality," Zian said.

The zawiya enables "religion to be separated from politics," he added. "It is a place for debate, where people can devote themselves to all the spiritual practices. But that's completely lacking in the north," Zian explained.

Writer Abbassi Mustapha tells Magharebia: "For a long time we've been drawing people's attention to the existence of international fundamentalism in the northern region," he said.
Now, women, old and young, "are being radicalised and setting off for jihad to join their husbands", he commented.

He noted the ties between extremists and street crime.


"The facts show that radicals have always had connections with this easy money," he explained.

"It's this money that allows them to set up cells. In fact, the jihadists who have been arrested have links with drug trafficking, car theft and all kinds of illegal activity."
"This is why the north has become fertile ground for the development of jihadist cells, particularly in Fnideq, Martil, Tetouan, Laarache and Tangier, to a lesser degree," he told Magharebia.  (hmmmm.... Tangier...Tetouan and Martil.... places we spend a lot of time in...oh wait they omitted Oeud Laou!)

"The majority of these work in smuggling, have a history of drug trafficking, or are street vendors with connections to smuggling," the journalist said.

They grow hash in mountains of the Rif, the largest area centered on Hocemia.  They've done that for centuries. Its not likely to go away right away.  The urban legend in the region is that Rif Berbers freed themselves of the Spanish.  A prior king (not the current one) came in and wanted to exert dominance after the fact, the elders said "hey wait a minute..where were you when we got rid of the Spaniards?  So a compromise was reached where they kept local autonomy in exchange for tribute payments which started the hash growing industry... at least that's the story I was told...I'm not swearing that's the official story... but the one commonly told around these parts...

The Berber people have a high percentage of Rh negative blood types, a trait they share with Cherokee and Basque people, which makes them likely descendants of Atlantis survivors.  There is a mountain range in Morocco called the "Atlas". The name "Berber" means "noble people".  They remind me an awful lot of Cherokee Indians in America.

Hash is a concentrated cannabis derivative made from the pollen of pot plants. Its made from Organic non-GMO non-Monsanto pot plants. And well we know how Monsanto is connected to warmongering congressmen in the USA and the cannabis legalization rage sweeping America and Europe...

Implication here in the article is all this independent money COULD fund terrorism (doesn't mean it does!).  What they fail to mention is how difficult it is to send money OUT of Morocco. You can wire money in, but its extremely difficult to get money OUT.... Just try and send a Western Union wire out... you can't do it!  Same with money transfers.  Most VISA cards here are domestic use only.

This pattern is now taking on an international dimension, he concluded.

Only in your friggin' deluded war mongering mind my friend.... This is another one of those cases of a "solution" looking for a problem.... This region poses no threat whatsoever to American Citizens.

I'll tell you what does bother Arabic speaking people's, watching "collective punishing" level Gaza using US Made military equipment level by the Israeli Defence Force, on Al Jeezera...and you guys could do much to stop that...given you are US Military.

In closing I'll include some more bogus terrorism articles this site has posted....
Continue reading HERE.