A Note about dani's recent posts....

It would seem that some of my previous articles have upset the apple cart for many people.  I was actually going to address this topic when.... my computer died.  And with all the drama that has been playing out here yesterday... I got completely side tracked.   So I send Bill a huge hug and thanx for the reminder!  See his article below: http://americankabuki.blogspot.com/2014/08/a-note-about-danis-recent-posts.html

Perhaps I should of been more specific, more exact in my descriptions who is following them (the controllers) and who isn't.  I didn't think it was necessary because I thought the one main statement I made with regards to ALL of the various templates was quite clear:  ANY group, organization, movement, network, system etc... that is working IN hierarchy, or working to set up a NEW hierarchy, or trying to change an existing hierarchy with another form of hierarchy IS being controlled by the "Controllers".  That is it.  If a group is NOT perpetuating separation, is NOT working in a hierarchical system/order, is NOT trying to create a new system of control that allows someone to be higher and makes someone else lower than others.... then I am NOT talking about that group/organization/movement/network/system.  It really is a very simple template.


The other thing that I was working on addressing in a separate article (that has since been wiped out with my computer, lol), was the fact that most of these "controllers" aren't "from around here".  As I said previously, "they" have convinced very awesome people to be the "frontmen/women" of their control groups.  That was the only way to get people to actually BELIEVE their plans.  People can smell a dirty rotten rat from a mile away, so "they" almost always use very charismatic and passionate people who themselves truly believe that they are doing a good thing to change the world. That was the only way that the template would work.

In an nut shell:  Hierarchy = controllers.   That's it.

Now, for full transparency on the post by Bill (below), I will include a copy of the entire conversation that was sent to him so that the comments below are more clearly understood within the context that they were sent.

Just wanted to point out that D, in her eagerness to discredit every single 'movement' and 'group' on the planet that is NOT under her own and/or Heather's 'banner' (and furthering the cause of 'separation' she seems so adamantly to be blaming everyone else for), has made a very fundamental ERROR. Here it is:

"The "New Age" groups are woven into many of the above groups, intertwining the religious template with the financial and legal and political ones. Their tools are to promise financial/legal freedom, a new government(s), a return to prosperity and "oneness", "enlightenment", "ascension", re-education of "history"... and brand new beginning in a "whole new world". Yet as I pointed out in yesterdays article about the religious template, these groups always work in through hierarchy:

In this "New Age" and "Ascension" movement that predominates so many avenues of discussion about "spirituality" and "consciousness", the "LOVE & LIGHT" message is almost always tied to a hierarchical system of separation. There are levels of "D'ness" to attain: 3D. 5D, 7D, 500D.... There are frequencies to be "raised" to a "higher level", and a system of Hierarchical beings/ascended masters/enlightened ones/"angels" and higher "D" level "galactics all in place to tell you who you are, what your "history" is, and what lessons you have to learn to make your own way up the "chain of command" in the "D's"."
This hierarchical belief system among what she still calls 'New Age' aficionados DIED years ago. It is HISTORY. In the 80's and 90's, and even as recently as 2012, many who 'woke up' to these concepts did indeed sort of 'force' the Old Paradigm thought systems onto the 'Galactics' and 'Celestials' -- probably because most of them were involved personally (obv at the Soul level, in other incarnations) with the Galactic Wars. One MUST have a 'chain of command' if one wages war, no? But I digress. . . . . Over the last 2-5 years, the vast majority of those who D calls New Age or Ascension types have come to realize two things: A) At the 'Higher D's', WE ARE ALL ONE ANYWAY. Even the 'bad guys' (no such thing in Reality of course, just more duality separation BS). B) WE ARE 'THEM'. We ARE the 'galactics' and 'celestials', dude -- incarnate as 'human beings' in this Matrix Illusion WE CREATED FOR A PURPOSE.

Anyway, the rest of what she perceives is pretty darn perspicacious, and I, as one of those Mongrel Souls who incarnated to both create, and now UNcreate, this Matrix, find no 'problems' with her analyses of the current situation. I leave you with a link to the last thing I posted on my own web site, for both your and D's 'information'. I AM not being 'presumptuous', nor 'criticizing' her or anyone else. We are ALL exactly where we are supposed to be, according to our own Grand Plan that we all worked out together before our current incarnations. <B97.gif> I just feel that you guys over there working under the tight supervision of the MIBH (Men In Black Helicopters), and creating your OWN little mega-dramas to keep things 'interesting', might be assisted by reading some material that comes from a perspective you may never had had the good fortune to come across. Or not. I can only offer you information, of course. It's up to each individual to CHOOSE whether to investigate things for themselves. Or not <B9F.gif>.

http://waverider1.wordpress.com/2014/07/05/global-update/
And BTW, 'they' KNOW who I AM -- and can't do jack about it. In past lives, I used to RUN their complicated little 'hierarchies', direct the Show across large swaths of human society. That's why I KNOW that D, bless her rebellious and hyper-intelligent soul, is VERY close to gaining that one more little step 'up' -- or 'zoom out', as she seems to prefer -- that shall help her fit ALL the 'little pieces' together. Once and FOR ALL <347.gif><358.gif>
May YOU BE with you . . . . . <B68.gif>

A note about Dani's recent posts...
By American Kabuki
I have received a few emails and Skype messages from people who felt Dani was "bashing" all "New Age" movements.   This is not true.  She's bashing any movement ("New Age" or otherwise) that is trying impose a new hierarchy - which is usually in the same old one in a new "party dress".    This world is controlled by a hierarchy that has existed on this realm and others for a very long time.
For example: The "Cabal" is but a western broker for collateral funds, which were always controlled by Chinese royal family members (and they are not exactly a united group even among themselves - many factions).  So substituting Chinese control for  "cabal" control, is logically simply downsizing the corporation for more direct control..and how's that working for China? Most everyone there wants to go somewhere else.  We see that downsizing and centralization mirrored in the more direct ownership of the banks...and as ZAP said recently...."the Chinese own the FED".  The aid to the Empress has already stated to Heather that they believe they own humanity (your physical being and vehicle) by rights of the Treaty of Rizq, which they signed with the Anunauki home world Rizq.  The "Old Man" is exposing it all to complete transparency as he said he would...
There's  simple truth for one to be "higher" on a hierarchy someone else has to be "lower".  The upper tiers always have their perks and special status. 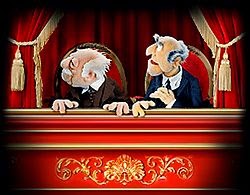 What D. is talking about in particular is not organization itself but the tool of organization used in a way to impose limits and separation upon people and that'salmost always a hierarchy either involving existing world governing bodies (either overtly or covertly) or their perceived "spiritual hierarchy" through one form of"phoenix" of the systems or another...tada!!! Here's your new religion / government / life / banking system... but the two old divine muppets in the peanut gallery are still heckling away at the foolishness of humanity..... The condescension is palpable in many channelings and "ascended masters" writings.
There are many forms of organization that are not hierarchal (like the internet), the neurons in your body are a network organization.  Organization is but a tool.
Below is a fairly typical exchange, I am deleting the persons' name... along with some slight editing for privacy...but it is typical of the comments I am getting...

ABC wrote:
A)  At the 'Higher D's', WE ARE ALL ONE ANYWAY.  Even the 'bad guys' (no such thing in Reality of course, just more duality separation BS).  B)  WE ARE 'THEM'.   We ARE the 'galactics' and 'celestials', dude -- incarnate as 'human beings' in this Matrix Illusion WE CREATED FOR A PURPOSE.

ABC wrote:
And BTW, 'they' KNOW who I AM -- and can't do jack about it.  In past lives, I used to RUN their complicated little 'hierarchies', direct the Show across large swaths of human society.  That's why I KNOW that D, bless her rebellious and hyper-intelligent soul, is VERY close to gaining that one more little step 'up' -- or 'zoom out', as she seems to prefer -- that shall help her fit ALL the 'little pieces' together.  Once and FOR ALL as I know who I AM too (chuckle)

D. wrote:  tell him I said I agree with him completely.  and if he'll notice:
"Basically, if a group is offering anything that involves "government", "money", legal salvation", etc... or some sort of system of hierarchy and control by "others", then you can almost guarantee that they are operating in one of the controllers "groups".  The templates are very easily seen."

Thus those groups who are NOT working from "hierarchy" are not the ones that I am saying are part of the groups being led by the controllers.  Hence any that he is talking about that are NOT hierarchical based are NOT the groups that I am talking about.  I am specifically aiming that section at the .... "ascended masters, and the groups such as those run by ... various ... channelers  who are perpetuating this system of hierarchy.  That's it.  That's all I was pointing out.  It's NOT about "us vs them"- that exactly what I have been saying for a long time.  And I am pointing the finger at those groups....who ARE perpetuating that type of separatism. (heart)

D. wrote: I would appreciate it if you could forward this to ABC... as I do not have any access to email any more- thank you love.

PS:  I don't have any "groups, neither does Heather (chuckle) so I'm definitely not banging  the "my group is better" drum :D
...hell, half the time even Heather and I don't agree :D
...and you can tell him all of that too (heart)
...and tell him "thank you" (kiss)