Just over a week ago the internet buzzed very loudly over a video that show Tony Hawk on a hovering "skate" board.  The Huvr board video went viral in a matter of hours and people we're pretty damn excited by the whole thing.  I can admit it: I was SUPER EXCITED!!


Almost simultaneously with the release of the HUVR board videos came this article:

Boeing: Anti-gravity propulsion comes 'out of the closet'

March 3, 2014 - Boeing, the world’s largest aircraft manufacturer, has admitted it is working on experimental anti-gravity projects that could overturn a century of conventional aerospace propulsion technology if the science underpinning them can be engineered into hardware.


As part of the effort, which is being run out of Boeing’s Phantom Works advanced research and development facility in Seattle, the company is trying to solicit the services of a Russian scientist who claims he has developed anti-gravity devices in Russia and Finland. The approach, however, has been thwarted by Russian officialdom.

The Boeing drive to develop a collaborative relationship with the scientist in question, Dr Evgeny Podkletnov, has its own internal project name: ‘GRASP’ — Gravity Research for Advanced Space Propulsion.

A GRASP briefing document obtained by JDW sets out what Boeing believes to be at stake. "If gravity modification is real," it says, "it will alter the entire aerospace business."

But it is also apparent that Podkletnov’s work could be engineered into a radical new weapon. The GRASP paper focuses on Podkletnov’s claims that his high-power experiments, using a device called an ‘impulse gravity generator’, are capable of producing a beam of ‘gravity-like’ energy that can exert an instantaneous force of 1,000g on any object — enough, in principle, to vaporise it, especially if the object is moving at high speed.

Podkletnov maintains that a laboratory installation in Russia has already demonstrated the 4in (10cm) wide beam’s ability to repel objects a kilometre away and that it exhibits negligible power loss at distances of up to 200km. Such a device, observers say, could be adapted for use as an anti-satellite weapon or a ballistic missile shield. Podkletnov declared that any object placed above his rapidly spinning superconducting apparatus lost up to 2% of its weight.

Although he was vilified by traditionalists who claimed that gravity-shielding was impossible under the known laws of physics, the US National Aeronautics and Space Administration (NASA) attempted to replicate his work in the mid-1990s. Because NASA lacked Podkletnov’s unique formula for the work, the attempt failed. NASA’s Marshall Space Flight Center in Alabama will shortly conduct a second set of experiments using apparatus built to Podkletnov’s specifications.

The GRASP briefing document reveals that BAE Systems and Lockheed Martin have also contacted Podkletnov "and have some activity in this area".

It is also possible, Boeing admits, that "classified activities in gravity modification may exist". The paper points out that Podkletnov is strongly anti-military and will only provide assistance if the research is carried out in the ‘white world’ of open development. ( via ufoevidence.org )

Now when you look into this further- googling the basic verbiage of content you  will find that it's not new.  In fact, it would seem that the same information has been brought out several times- most notably in 2002 and again in 2009.  It would seem that there is almost a testing going on to see what the public's reactions would be?  Wikipedia has some interesting information on the US's interest in "anti gravity"  research dating back to at least the 50's.


"Anti gravity" research began much earlier.  Thomas Townsend Brown's "Gravitator" work is an interesting look into that type of research, and of course Nikola Tesla was quite literally the grandfather of this type of work.  For more information of the historical background of "anti gravity" research, I highly recommend This Article HERE .

We could spend literally weeks discussing the scientific magnitude of this type of research and the research and the achievements of these incredible scientists and inventors, but that is for another time.  For this moment I would like to flash forward to this moment of NOW.

So first we have the HUVR board video going viral:

Immediately followed by (and yet perfectly timed),  an obviously professionally produced and directed "apology" video by Christopher Lloyd saying that "Funny or Die" made up the whole scam and even fooled him....

I would of embedded the video here, but strangely enough, there are no embedding codes for this video- something I've never run across before.  I took a screen shot below of the Youtube page (below), and you can see the video yourself HERE

So there is a HUGE mega hoopla over anti gravitation toys, followed by quiet articles being released about the US researching "Anti-gravity" technology, then huge debunking of the hover boards, and as the the world sigh's a disappointed sigh over not getting a floating skateboard for their birthday this year, then THIS video is released in the Main stream media- "UFO spotted over Ukraine!"  HERE.


Of course, anyone who's been following "UFO" sightings for any amount of time immediately recognized the distinctive  cigar shape  that has been seen all over the world for years.   A simple You Tube search of "Cigar shaped UFO" will lead the watcher to a plethora of videos spanning years and all continents.

So, it really wasn't all that earth shattering to see the independent videos of the ""cigar shaped UFO" over the Ukraine, but it was definitely nice to see the main stream coverage. Not much more thought given to it though on my part- I'm a little busy at the moment, lol.

Then I get sent a link this morning and I started to follow the "energetic trail", and it all started to tie in together.

Apparently, right after MSN released the video of the "UFO" over the Ukraine, Turner Radio- another main stream news outlet- announced that the "cigar" shaped "UFO" was actually a brand spankin' new  US military super top secret vehicle called the "Dreadnought"!!!

I shit you not!

Strangely enough, when you search for this news release on Turner Radio you see this: 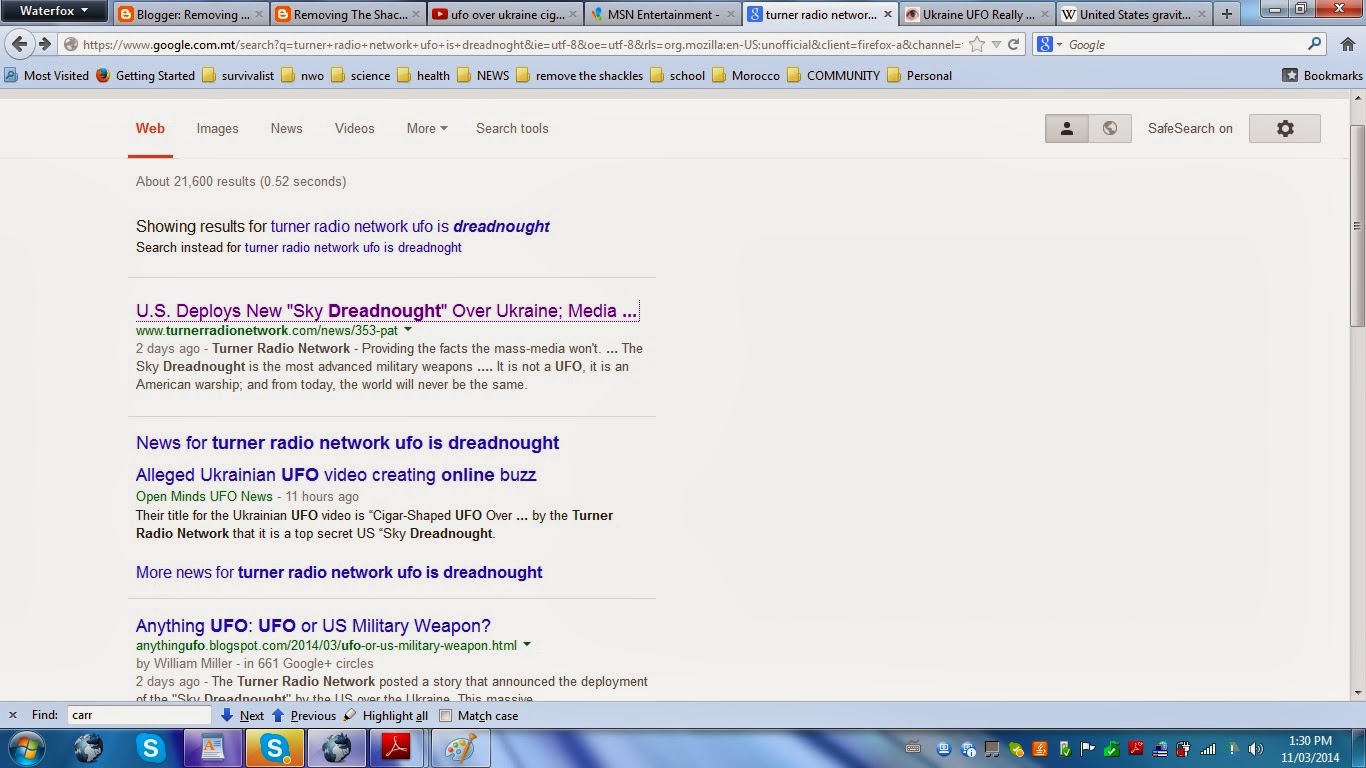 But when you click on the link, you get one of these: 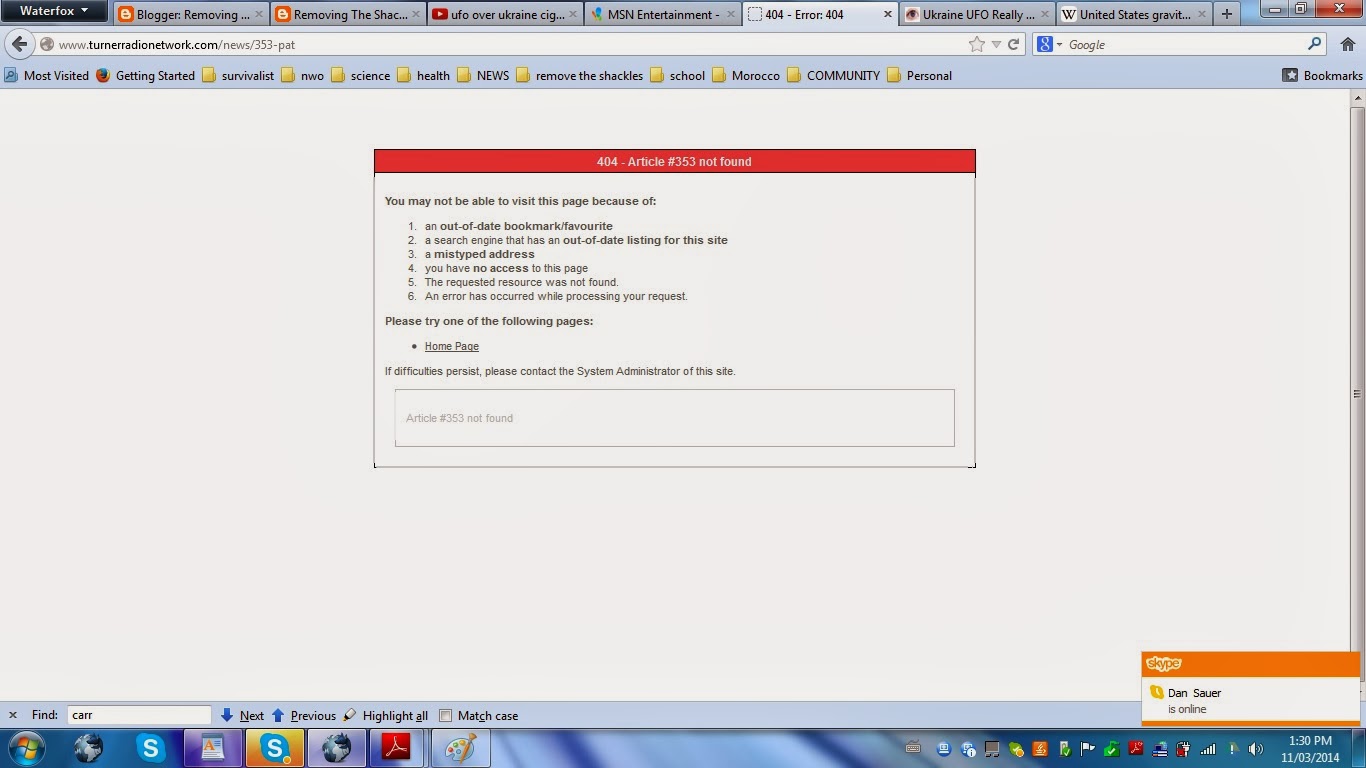 But that's ok because I also found this video that shows the entire Turner article:

Strangely though, when I tried to search for the same video on You Tube to embed it here.... NOTHING came up!.....  searching: "ufo dreadnought over ukraine" brought up a whole bunch of videos of one particular blogger though, that had nothing to do with the subject with the exception of the very first video claiming that it was all a....... you guessed it, a hoax.  And when I did a YouTube search for "turner radio network US dreadnought", it turned up completely NOTHING!!

.... call me silly, but t'would seem to me that someone is meddling in the search engines!!!

So to recap, we have a hover board, and a hover board hoax (all fully produced at a very high professional level), articles about Boeing making anti grave vehicles for the US, Then a familiar shaped "UFO" conveniently appears over the Ukraine- and is picked up by main stream media- and then another main stream media outlet claims that the gigantic cigar shaped UFO is really a top secret US ship called the Sky Dreadnought. Then all media links to the story disappear and You Tube searches black out all videos on the subject....

Oh and did I mention that since the UFO appeared, there have been no reliable coverage of ANY fighting in the Ukraine?  NONE.   As in:  All is Quiet.  Apparently.


And now the funny stuff!!!  This morning I also get sent a link to a "channeled" message purportedly to of come from "Ashtar".  As I've said many many times, I very rarely even read these channeled messages, but occasionally one swings into focus.  This one was apparently swung into focus by my funny bone.

Here is just a part of what "Ashtar" has to say about the Sky Dreadnought:


Making the craft all the more amazing is that once its weapons are used, the area in which they were used is completely safe to enter. No long-term radiation or other health hazard exists. This being the case, the craft can go in, utterly flatten an entire country, and the area it conquers will be ready for re-population and re-development by the United States immediately after the confrontation.


Believe it or not, the craft is based at an undersea base in an ocean. The craft can operate underwater, but there are still some unresolved issues in using its weapons while it is submerged; the weapons work, but anything even close to the area they are used is also affected by the dispersion of the plasma, which has unintended consequences for innocent life forms in the area.


You've heard of the "United States of America?" Get ready for the United States of Earth.  [Ashtar:  Read, NESARA]  There will be a "new world order" and it will be American.


The presently existing nations of the world have proved themselves uneducated, petty and barbaric; they have lost the right to be sovereign independent states. As will be displayed shortly in Crimea, once Russia misbehaves too much and is utterly humiliated when battle begins, the "one-world-government" that's been in the works in the UN will suddenly turn out to be American; because the rest of the world will have no choice.


...Yes, indeed, Beloved Ones, there was a massive surveillance ship over the Ukraine, but it was not developed by the U.S. government in secret.  It belongs to the Sirius Star System Fleet, under the Ashtar Command.  I could not resist - I took the helm myself to carry out this mission, and what a pleasure it was!


Now, you may be wondering about the above "press release."  I must admit to having come up with the rather catchy name, the "Sky Dreadnought." Of course it is a bit of a play on words, since it is intended to sound terrifyingly dreadworthy, but the title can also be read as Dread Not.  We are rather proud of the science fiction bit of (group) writing which describes very accurately, if a bit dramatically, the actual capabilities of the ship, which Kathryn has described as "totally awesomely awesome."

We are especially pleased with the outcome of our efforts.  There will now rage a debate across the world about the true origins of this craft (thanks to our Turner boots on the ground.)   If it is truly "the most advanced military weapons system in the history of human existence," and it belongs to the U.S., the rest of the world is completely under the control of the United States, as the article says.  If it doesn't belong to the U.S. (and no one else has claimed it) then what???  It has to be a UFO!

Either the "ETs" are Space Gun toting John Wayne wannabees or the US secret mind control programming is moving along very nicely in certain areas.   OR......  Is this a piece of the US military that has been working with the tall blonde guys for the past decade, trying to push their "New" financial system?   A piece of transparency?   I guess we'll have to wait and see eh?


But as I said last week in one of my skype rooms when the HUVR boards were being exposed as a "hoax":   That the "hoax" aspect doesn't resonate with me at all, and that there is more going on behind this- it's making my itchy bump itch.....  I dont' believe in coincidences.  If all these things had taken place even a couple of months apart, I might of viewed it differently, but when they all happen in the same week? .....

Let's keep our eyes open. I'm pretty sure we will see the way this all ties in together very very soon.