They will not control us! We will be victorious!


Paranoia is in bloom,
The PR, transmissions will resume
They'll try to, push drugs that keep us all dumbed down
And hope that, we will never see the truth around
(So come on)


Another promise, another seed
Another, packaged lie to keep us trapped in greed
And all the, green belts wrapped around our minds
And endless red tape to keep the truth confined
(So come on)


Interchanging mind control
Come let the, revolution takes its toll
If you could, flick the switch and open your third eye
You'd see that, we should never be afraid to die
(So come on)


Rise up and take the power back
It's time the, fat cats had a heart attack
You know that, their time's coming to an end
We have to, unify and watch our flag ascend
(So come on)

All over this glorious planet of ours people are standing up.  They are standing up for all sorts of reasons, but they are unified in one action: THEY STAND UP!

Make your stand how ever you want, but make your stand!  The media controllers are doing all they can to try to convince the world that those standing up are but a few dissonant rebellious youths who just want to make trouble and make a fuss.  BUT.... their control of their own media is very quickly slipping through their fingers.  The news is leaking out so fast now, that the tiny cracks that appeared in the dam last year are now threatening to become a high pressured deluge that will burst from the confines of iron control.

The media is being made a fool of, and they know it. 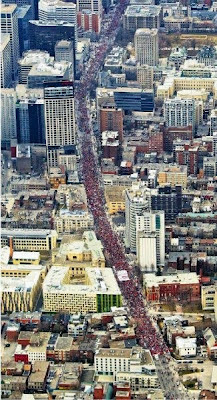 A media outlet had the audacity this past weekend to say that this protest march was attended by "a few hundred" students:

... either they've lost the ability to count, or they're desperately trying to cover up the reality of hundreds of thousands of people taking to the streets, with pots & pans in a peaceful, yet not very quiet, protest in Montreal Canada.

If we make enough noise, they will not be able to ignore us.

As an interesting little side note, Wassailing is a tradition where people gather together to make lots of noise to scare away the evil spirits to help insure a good crop the following year.  The tradition of making loud noises to scare away "evil spirits" is seen through out many many ancient traditions all across the globe.

I'll get back to this thought in a minute

This article kinda has the right idea.... kinda.

Ladies of the world, wherever you are, whatever you are doing on Thursday, the 31st of May at 4pm Eastern time, drop it. Grab up a pot or pan and a large metal spoon and step out on your porch, outside your job on the sidewalk, in front of a government building and make a BIG BIG NOISE! If you are at home hand the lids to those pots and pans to your children and show them how cymbals work! Let the self appointed elite know the women of the world are not alright with what they have in mind for our children, that we are not alright with what they have in mind for us, that we are not alright with waging endless wars for profit at the expense of the lives of our sons and daughters, death and destruction for the purpose of lining their pockets, that we are fed up and have had enough. That we are willing to fight for what is ours and we will NEVER BEND TO THE WILL of men with no honor, no integrity, no decency and not enough intelligence to know when they have gone too far!Let the men who have enough intestinal fortitude to stand with their ladies join you! Make such a noise that it can be heard around the world, such a noise that even the dishonest media cannot ignore! We are wives, we are mothers, we are the keepers of family and decency, we are the world, the world of peace, equality, love and all that is gentle but we are fierce and capable when threatened!Just like William Wallace American Women say this to those who presume to know what is best for us in Washington D.C. ! You think the people exist to provide you with position WE SAY YOUR POSITION EXISTS SOLELY TO PROTECT OUR FREEDOM, DO YOUR JOB OR GET THE HELL OUT OF THE WAY!OFFICIAL INTERNATIONAL POTS AND PANS BRIGADE BEGINS THURSDAY, MAY 31, 2012 AT 4:00 PM EASTERN TIME AND WILL REPEAT AT THE SAME TIME EVERY LAST THURSDAY OF EVERY MONTH HEREAFTER!Any of you out there who can video your pots n pans brigade contact Freedom Reigns at http://www.freedomreigns.us/ We will edit video footage from all over the world and upload it for all to see. BE HEARD LADIES! FOR THE CHILDREN, FOR YOURSELVES AND FOR HUMANITY!SEND THIS INFORMATION VIRALLY! COPY AND PASTE IT INTO FLYERS, POST ON PUBLIC FORUMS, IN CHAT CITES AND SKYPE, SHARE WITH YOUR NEIGHBORS, SPREAD IT FAR AND WIDE!Attached to this email is an article which explains what happened in Iceland when the ladies used their pots and pans! And by the way the ladies of Argentina, Spain, Nicaragua just to name a few did the same thing and brought great change when the message got across that we are done putting up with evil, selfish, immature behavior from our leaders.LINKS:http://tinyurl.com/chyggvphttp://www.redicecreations.com/http://tinyurl.com/cxkpslchttp://www.ianrcrane.com/Teri1892 – Bankers adopted their Bankers’ Manifesto of 1892 in which it was declared: “We [the bankers] must proceed with caution and guard every move made, for the lower order of people are already showing signs of restless commotion. Prudence will therefore show a policy of apparently yielding to the popular will until our plans are so far consummated that we can declare our designs without fear of any organized resistance. The Farmers Alliance and Knights of Labor organizations in the United States should be carefully watched by our trusted men, and we must take immediate steps to control these organizations in our interest or disrupt them….The courts must be called to our aid, debts must be collected, bonds and mortgages foreclosed as rapidly as possible.When through the process of the law, the common people have lost their homes, they will be more tractable and easily governed through the influence of the strong arm of the government applied to a central power of imperial wealth under the control of the leading financiers. People without homes will not quarrel with their leaders.”

My friends, I know what I know and I know that the Cabal is on the run.  They are in a desperate panic and running around like chickens with their heads cut off.  Actually, they are more like a beheaded snake, writhing on the ground.  The fangs are still dangerous and filled with poison, but these last agonising convulsions are the flailing thrashings of an already lifeless being.

The evil snake may be in it's dying throes, but now is not the time to sit back and watch the floor show.  Now is the time to push forward even stronger. Now is the time to stand up and make sure that any snakes that remain know that we are here and we are NOT going away.  We are awake and aware and we will not go quietly into their night.

Yes, the banging of pots & pans.  Let the noise become so loud all over this world that it wakes the sleepers and becomes a siren call to every human on this planet to Stand Up.

Not one day every month.

EVERYDAY of EVERY Month.

There is a presence of negative energy on and around this planet- the last thread-like web of control, being held together by the withering entities that thought they could control us and keep us in a drug and media induced slumber.  NOW is the time to break those tiny weakened strings that are binding our planet to their influence.

Like the old traditions of scaring away the "evil spirits" with the banging of drums and the ringing of bells, let us clear away these last negative entities!

EVERYDAY of EVERY Month.


Everyday at 4pm local time, get out your pots & pans, get out your bells and your drums!  Go outside and ring and bang, dance and sing!!!


WE are the people!  WE are powerful.  We are Eternal.