Sol Flips it's Magnetic poles.... or not?

So after all the hype, it would seem that our lovely Sol has flipped it's magnetic poles..... at least, that's what main stream news story is saying.  However, I can find not a single mention of it on NASA's website.... then again, this is NASA that we are talking about, so the fact that they haven't updated their news section since December 26th, 2013, really isn't that much of an indicator.   Below is a video from NASA, and another video that discusses the news article.  What I DO find interesting is that neither Solarham, SuspiciousObservers, Watchers, nor any other sites I usually visit are reporting on the Solar magnetic pole reversal..... and that makes me say "hmmmmmmmm".

....although, SDO was out of commission last week for a few days -notably, exactly when we had 6 M class flares in a row, and now we get a report that the Sun has reversed it's magnetic polarity..... what a convenient time for the SDO camera's to not be working eh?  Kinda like how SOHO and SDO seemed to of been glitching right as ISON was doing it's sling shot in perihelion around the sun? I'll get back to this in a second.

Here's the thing that has been bugging me for a long long time now.  We have NASA as our main "eyes in the skys" for most things we are trying to watch in our solar system- such as our sun Sol.  Whatever doesn't outright belong to NASA is pretty much controlled by NASA or one of the "Government" agencies,  which means that every thing they tell us is highly suspect and has most likely been spin doctored to the point of outright lies.   We've watched them show us doctored photographs over and over again since the first space flights.  We've watched them falsify evidence, scientific papers, satellite images and lie through their teeth over and over again.  The faked images during ISONs Perihelion trip were so ludicrously amateur that any grade 7 student could of done a more convincing job of making a single frame look like a video feed!!

We have to rely on their satellites, their pictures and for them to actually release that information to the public.

Then you have things that just don't add up.  Now as I've said, I'm not an astrophysicist- I'm just an eager amateur at best- so I don't have the scientific background to be able to explain, back up or refute some of the things I've been watching.  Such as:

- how almost EVERY SINGLE major sun spot- particularly those that are Beta gamma, or Beta gamma delta- can be firing off M and X class flares for days, then as soon as those spots rotate into directly earth facing position,....... then suddenly turn quiet as a mouse.  And then as soon as they rotate over the western limb.... BOOM!  off they go again.  I have watched this scenario play out over and over again for the past couple of years.  I've discussed it with several friends who are also sun watchers.... we've all seen it happen continuously, and yet cannot explain it.   Back in October I wrote several articles following the solar updates as we were getting flare after flare- as yet, right in the height of it all, the mega sun spot 1877 rotated directly into earth facing geoeffective positioning.... it completely fizzled out.  Then the moment it  rotated to the far side, it started belching out M and X class flares again!

-and this bit about the sun reversing it's magnetic poles.... I can't wrap my head around it- and neither can my husband Nick, who is rather knowledgeable about magnetics.  Follow me on this for  a moment:  if you have two strong magnets, they each have their own magnetic field, right?  OK, so if you lay the magnets on a table within range of each of their magnetic fields, the magnets will automatically align themselves to the magnetic polarity of the other magnet.  if you take one of the magnets and turn it around so that it's polarity is reversed, then the second magnet will TURN itself to align itself with the first magnet.  Right?  I mean, we've all played these games in school with magnets- we've all seen how this works.

OK, so our Sun is basically the biggest magnet in our solar system (by far, lol). Note that the Sun's South pole is up top and it's North pole is down below- the exactly opposite of earths.  Hence.....?

So by the rules of science that they taught us in school...... if the solar magnetic poles flip, then Earths magnetic poles have to flip too.... other wise the fields will repel each other.

I'm not fear mongering here and shouting that  "OH NO Earth's Magnetic Poles are going to flip and we're all doomed!!!", I'm just saying that something doesn't add up here.    Did the Sun's poles actually flip?   Didn't they?  Does Earth's Poles flip as often as the purported Sun's poles flip? Or don't they?

...and why, when you look at the STEREO far side map is there always two circular or semi circular patterns at what could be called the east and west poles? (My blue circles added to show area) 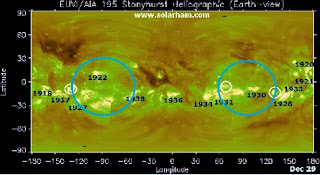 Well, If I find any answers, I'll be sure to update everyone, but in the mean time, it's back to researching magnetics for me.

OH!  One last little note on this subject:  I don't know if the author of the Solar flip article from the Independent (below) mis-quoted NASA, or if NASA actually said it but.....

The sun’s magnetic field has fully reversed its polarity, marking the midpoint of Solar Cycle 24, which will be completed in 11 years time

The sun has "flipped upside down", with its north and south poles reversed to reach the midpoint of Solar Cycle 24, Nasa has said.

Now, the magnetic fields will once again started moving in opposite directions to begin the completion of the 22 year long process which will culminate in the poles switching once again.
"A reversal of the sun's magnetic field is, literally, a big event," said Nasa’s Dr. Tony Phillips.
"The domain of the sun's magnetic influence (also known as the 'heliosphere') extends billions of kilometers beyond Pluto. Changes to the field's polarity ripple all the way out to the Voyager probes, on the doorstep of interstellar space."
To mark the event, Nasa has released a visualisation of the entire process.
At the beginning, in 1997 the video shows the sun in Solar Cycle 23 with its positive polarity on the top (the green lines), and the negative polarity on the bottom (the purple lines).
Each set of lines gradually move toward the opposite pole, showing a complete flip around 2002, completing the sun's previous cycle.
Both set of lines representing the opposing magnetic fields then begin to work their way back, to culminate in the latest flip.
"At the height of each magnetic flip, the sun goes through periods of more solar activity, during which there are more sunspots, and more eruptive events such as solar flares and coronal mass ejections," said Nasa’s Karen C. Fox.
"Cosmic rays are also affected," added  Dr. Phillips. "These are high-energy particles accelerated to nearly light speed by supernova explosions and other violent events in the galaxy."