ALL of Your Debt is PRE-PAID

Too much info to put out in a single article, so I'll continue over here, lol.
..... And then there is this article that again explains how YOU are the VALUE and that all debts are pre-paid!  There is NO DEBT!!!!!  None! Zip!  Zilch!  You OWE NOTHING!!!

Proof ALL of Your Debt is PRE-PAID! 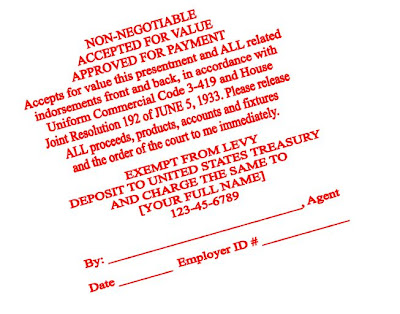 I had a discussion with a friend the other day when I asked the question on Facebook, "If you found out your mortgage, car loan, student loan, credit card was fraudulent debt, would you keep paying it?" I included a link to the post I put out about Key Bank waiving a $32K loan. This was his response:

"If I borrow money from someone, I'm going to repay it. I don't care if it's the mafia, some made-up big brother organization, or a bank. Stealing is stealing, regardless what you believe, two wrongs don't make a right."

The problem with this response is that it's based on a backwards view of what money and credit REALLY is. What if everything we've ever been taught by the system to believe about money and credit is an illusion? Well, it is. Many of those who will read this article already know that. Yet even those who do know, still can't quite wrap their heads around how the system works in actuality. Believe me, "they" do an extremely good job of keeping these Truths very well hidden. This article does a phenomenal job at breaking it down in very simple, easy to understand terms. All of the facts presented are supported by hard data. Also included is an example of a response letter from AT&T to a charge being disputed, whereas the disputing party requested funds be taken from their "Prepaid Treasury Account," to settle the "alleged" debt. What is not shared by this blogger is the documentation submitted to AT&T, which I am working on trying to retrieve from him now.

Before I get to the meat and potatoes of this brilliant article, here are a few facts to consider in the response to my friend on Facebook:

"A deposit created through lending is a debt that has to be paid on demand of the depositor, just the same as the debt arising from a customer's deposit of checks or currency in the bank. Of course they do not really pay out loans from the money they receive as deposits. If they did this, no additional money would be created. What they do when they make loans is to accept promissory notes in exchange for credits to the borrowers' transaction accounts. – Federal Reserve Bank, Chicago, Modern Money Mechanics, p. 6

Banks are prohibited from lending their ‘own money’ from their own assets, or from other depositors. So from where did the $$ come? The contract we signed (our promissory note) was converted into a ‘negotiable instrument’ by the bank and became an asset on the bank’s accounting books. According to the UCC 1-201(24) and 3-104, it was our signature on the note which made it $$.

Our promissory note (‘money’) was taken, recorded as an asset of the bank, and sold by the bank for cash without ‘equal valuable consideration’ given to us for our note. The bank gave us a deposit slip as a receipt for the money we gave them, just as the bank would normally provide when we make a deposit to the bank. It then created an account at the bank which would contain this $$ which we just created. A check on this account was issued with our signature and this account is the source of funds behind the cheque which we received as a ‘loan’.

The bank risked none of its own assets in the so-called ‘loan’ to us; rather it used our note to pay the seller, in order to raise an asset for itself, and also used the face value of our note as ‘principal’ which it claims it ‘lent’ us and against which it charged interest. Consideration on the part of the bank is non-existent so the bank has nothing to lose. It can not possibly sustain a loss. Since consideration is essential to an enforceable contract and the note was obtained from us via fraud, the entire transaction/ contract is fraudulent.

Mortgage contracts are written in such a way to appear as if the bank lent us funds before they received our promissory note/ mortgage contract so that the bank can use it as a receipt which they can sell. The contract reads, “For a loan I have received...”, but, you haven’t received it yet. So in fact, we signed and gave the mortgage contract/note to the bank prior to their giving us the funds. So, the application for the loan created the funds (it has our signature on it) and the note (with our signature) covered the funds to ‘repay’ the loan. Again, constructive fraud."

Here is the link to the original article. On this blog there are also many other great posts to research. One point I do want to make is that this gentleman on many occasions suggests filing a UCC-1 financing statement to reclaim rights to your Strawman account. However, the UCC filings submitted by The One People's Public Trust have effectively taken care of this step for EVERYONE on the planet. Therefore, it is no longer necessary for individuals to file their own. ~BK
Continue reading on Brian Kelly's site HERE

Email ThisBlogThis!Share to TwitterShare to FacebookShare to Pinterest
Labels: birth certificates, Brian Kelly, no debt, strawman, you are the value