"Money for nothing".... my friends, this one of the most important "economic" articles to be published this year.  This is Canadian Main stream media telling the truth to the world:

Money is nothing but a belief that it is worth something, and the printing of money out of thin air has NOT fixed any of the problems it was suppose to fix.  The unemployment rates are still sky high- regardless of the warped numbers given by the various governments who are desperately trying to convince their citizens that their economy has recovered.  The lies of how "Quantitive Easing" will "fix" the economy and make the world all sunshine and rainbows is clearly seen in the fact that this past two years the Richest got Richer, and everyone else got poorer.  As Zero Hedge said about the EU's QE scheme: "just turning Billionaires into Trillionaires".  Unless the money that is being printed out of Unicorn farts actually gets into the pockets of the people living in that country(ies), there is no true economic growth or "recovery".   It is the money in the pockets of the public that shows the economic health of the system.  If the people are poor, then obviously the economy is also poor.  The media might try to tell everyone that the sun is shining out of the ass of the Central Banks..... but that doesn't mean it really is.


...That $10 bill is only worth $10 because we all believe it's worth $10.  But when the public doesn't even have that $10 bill in their pocket, it's pretty damn difficult to convince them of anything.

My highlights in blue as usual.

Money for nothing and recovery for free? U.S.'s economic turnaround pulls EU into the pool


Two years ago, I sat in the hushed fortress of the Bank of England, listening to one of its secretive boffins, a languid fellow named Paul Fisher, explain the creation and meaning of money.
He reached into his wallet and fished out a 10-pound note.
This note is worth 10 pounds, he said, because you and I and all the people walking around on the streets out there believe it's worth 10 pounds.
That's it. That's the only reason it has any value beyond the intrinsic value of the paper and ink itself. It's all about trust and belief.
Forget any notion you might have about every pound, or every dollar, being backed up by that much capital out there in the economy.
The gold standard was a myth, too, by the time it was abandoned in the Seventies. There was never anywhere near enough gold to back up all the American dollars in circulation.
So, money is worth what it is only because we continue to trust it, explained Fisher, and any central bank can print more without debasing it as long as everyone keeps trusting and it's all managed carefully by wise people, to wit the central bankers, who are unelected and make their decisions in secret.
It was a dizzying, counterintuitive lesson.
A few months earlier, the head of Germany's central bank, Jens Weidmann, took another view of money, one much closer to my Protestant sensibilities.
He began the same way Fisher did, asking rhetorically what money is, then answering his own question: "Money is that which serves as money." 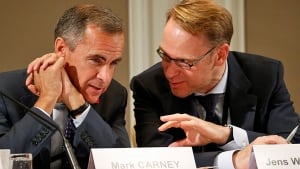 Bank of England Governor Mark Carney and Germany's Bundesbank President Jens Weidmann attend a conference of central bankers in November. (Reuters)
He then quoted Goethe's Faust, probably the foremost literary work in the German canon.
In part two of the fable, the emperor is whinging about his constant need for more gold, and Mephistopheles, the devil, advises him that all he really needs to do is sign some paper and call it money and everyone will accept it, and all his problems will be solved.
The venal emperor and his courtiers proceed to do just that, "drowning their desires with love and wine," a Goethe line Weidmann quoted directly.
Eventually, the devil disappears and they realize the currency is worthless. The devil's money, Weidmann told his audience, led to inflation.

Weidmann's lesson: Printing more money does indeed debase the value; it's alchemy, the creation of value from nothing, ignoble and irresponsible.
When I interviewed Fisher, the English central banker was making the case for the Bank of England's quantitative easing program, which eventually involved printing 375 billion pounds from thin air, then using it to buy government bonds already in circulation — an indirect means of lending the government money.
The U.S. Federal Reserve was doing the same thing, but on a much larger scale. It eventually printed $4.5 trillion, an incomprehensible sum, before stopping in October.
The goal was to keep interest rates on government bonds low, thus nudging investors into riskier ventures, thereby accelerating the weak economy into a virtuous circle of lending and spending.
The plan amounted to placing a bet on the limits of public confidence in currency, and it took the U.S. and Britain into unknown territory. 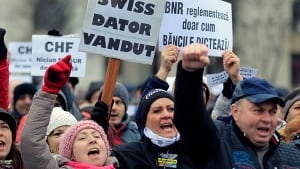 Not everyone is pleased by central bank manoeuvres. Romanian home owners, who took out mortgages in Swiss francs, are facing crippling exchange rate losses after a central bank-induced surge in the Swiss franc. (REUTERS)
In Europe, though, Germany's view prevailed, and the European Central Bank refused to follow the American and British examples (until now).
Following the great meltdown of 2008, more Euros were not printed. The German vision of austerity and thrift was instead imposed on the weak peripheral Euro countries: Spain, Italy and Greece were told to cut spending and tighten belts as a means of recovery.
Well, two years later, it's beginning to look as though good old Mephistopheles was on to something.
Here in Washington, even the Republicans, who took a more Germanic view and opposed the Fed's money-printing, are trying to take credit for the remarkable recovery that's now underway.
Unemployment here in the U.S. has dropped to 5.6 per cent. That's nearly full employment. Government revenues are rising, and the federal deficit is shrivelling.
In Great Britain, the same Paul Fisher who instructed me on money's ephemeral nature is happily taking credit for the recovery there.
"Without doubt, things would have been much worse if we hadn't stuck to our guns," Fisher told the Independent newspaper last summer.

The European Union's central bankers, meanwhile, have clearly decided the course they chose only prolonged the misery.
Unemployment is still at nearly 13 per cent in Italy, 25 per cent in Spain, and 26 per cent in Greece.
Worse still, the continent may be heading into deflation — a downward price spiral — something that scares the living daylights out of governments and which defies even the powerful tools of central banks.
So, with Germany's reluctant consent, the European Central Bank has begun operating the printing press day and night; it intends to print a trillion euros within the next year, and lend most of it to governments, virtually interest free.
It's probably a good idea. We shall see.
The final verdict has not yet been written in the U.S. and Britain. Without question, all that money-printing distorted financial markets, forcing investors to do things they otherwise might not have done, driving stock prices, for example, to record highs. 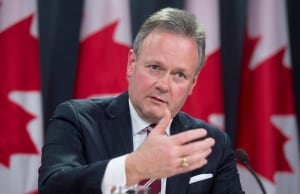 Bank of Canada Governor Stephen Poloz last week unexpectedly cut the central bank's trend-setting rate to three-quarters of a percentage point from one per cent. (Adrian Wyld/Canadian Press)
And the central banks must at some point begin to shrink their money supplies, which will raise interest rates, something businesses and consumers, addicted to cheap money, might not be able to cope with for some time to come.
The Bank of Canada, in fact, is so worried about Canada's slowdown that it just cut its benchmark rate further. If that doesn't work, it might have to consider a round of money-printing, too.
But I still can't get that lesson from Paul Fisher out of my head. Waving around a banknote, and saying it's only worth something as long as everyone agrees it is.
It's a confidence game, in other words. What wealth you think you have may or may not be there tomorrow, depending on bets placed by the unelected, albeit very smart people in charge of creating our money.
It's all real, unless it's not. Absence of evidence is not evidence of absence.
Money has value, or it doesn't. I don't think I ever want a definitive answer.