Greece Is Now a Russia Sanctions Veto. Merkel Is Foaming at the Mouth

Yes, regardless of the "economic" fall out of the new Greek Syriza government, the very fact that Greece is standing and saying "NO!" very loudly to the EU and actually has a veto power is being greatly understated by the western media.  Remember, on Tuesday when all of this was made quite clear in the face of the EU issuing statements against Russia without asking for the opinions of, or voting in favor of by the EU nations that they purportedly represent, Greece wasn't the only one to say "NO": Hungary, Slovakia and Austria ALSO stood up and voiced their disagreement- a fact that was under-reported and completely whitewashed over by the western media mobsters.

Things in Europe are getting very..... interesting. 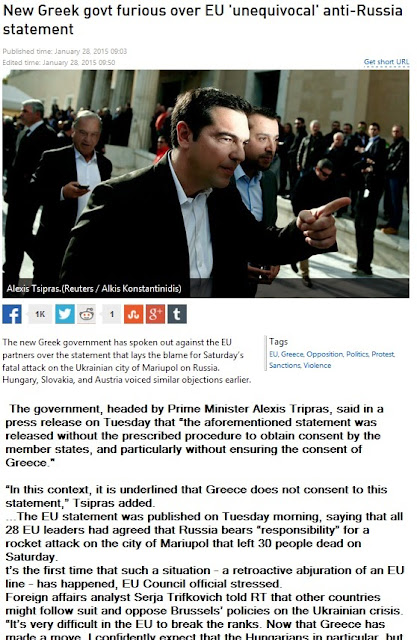 Greece Is Now a Russia Sanctions Veto. Merkel Is Foaming at the Mouth

Greece is now effectively a veto power when it comes to future Russian sanctions. Merkel will have to find a new country to bully.
17 hours ago | 3678 26
inShare In recent months, Kotzias wrote on Twitter that sanctions against Russia weren’t in Greece’s interests.
This article originally appeared at Zero Hedge
Two days ago, Zero Hedge first, and shortly thereafter everyone else, pointed out something stunning: the biggest surprise to emerge so far out of the new anti-Troika/austerity Greek government was not so much its intention to proceed with the first test of "Odious Debt" - this was largely known in advance - but its dramatic pivot away from Germany and Europe, and toward Russia.
As we noted before, not only has Greece already blocked all ongoing privatization processes, a clear snub of Merkel and the Troika which demands the piecemeal blue light special sale of Greece to western buyers as part of the "bailout", but is also looking at plans to reinstate public sector employees and announce increased pensions for those on low incomes: further clear breaches of the Troika's austerity terms.
But the most important message that Tsipras is sending to Europe is that (after meeting the Russian ambassador first upon his election) Greece is now effectively a veto power when it comes to future Russian sanctions!
This was first hinted when the Foreign Minister Nikos Kotzias, who arrives in Brussels today to discuss possible additional sanctions on Russia over the conflict in Ukraine, said a few days ago that the Greek government disagreed with an EU statement in which President Donald Tusk raised the prospect of “further restrictive measures” on Russia. As Bloomberg observed before, in recent months, Kotzias wrote on Twitter that sanctions against Russia weren’t in Greece’s interests. He said in a blog that a new foreign policy for Greece should be focused on stopping the ongoing transformation of the EU “into an idiosyncratic empire, under the rule of Germany.”
And Europe, shocked that one of its own has dared to question its "unanimous" policy toward Russia, a policy driven by the US foreign state department whose opinion of Europe is best captured by the hacked and intercepted "Fuck the EU" outburst by Victoria Nuland in February 2014, has been forced to backtrack.From DPA:

The European Union denied Wednesday that it ignored Greek objections when it issued a statement raising the prospects of new sanctions against Russia.
The row is the first of several clashes expected between Brussels and Greece's new prime minister, Alexis Tsipras, who was elected Sunday on promises to renegotiate the bailout granted to Greece by its European neighbours and the International Monetary Fund.

Tsipras has in the past also spoken out against sanctions on Russia, rejecting the use of "Cold War language."
The EU has imposed several rounds of sanctions on Russia for its role in the Ukraine crisis, notably economic measures restricting Russian access to European credit markets and European exports. On Tuesday morning, EU leaders in a joint statement tasked their foreign ministers with considering "further restrictive measures" when they meet on Thursday.
But Tsipras complained to Greek media that his country had not been consulted on the statement. "Greece do not consent," a statement by Tsipras' office said on Tuesday evening, adding that the announcement from Brussels violated "proper procedure."
A spokesman for EU President Donald Tusk, who issued the statement on behalf of the leaders, denied that Athens had been sidelined during the preparation of the text.
"We consulted everybody, as we always do, and we didn't ignore or sidestep Greece in any way - quite to the contrary," Preben Aamann told dpa. "We tried to find a special solution that would accommodate them."

Actually what the EU "always does" is to ignore the voices and interest of everyone but the most powerful. And as for "not ignoring" Greece, apparently the EU failed. Only this time Greece, its government no longer a Eurozone lackey, will no longer let it slide: "Greek broadcaster Skai said newly appointed Foreign Minister Nikos Kotzias would bring up the issue at Thursday's meeting in Brussels. Tsipras is also expected in the Belgian capital on February 12 for an EU summit that will touch upon the situation in Ukraine."
And here is how Russia just won another completely unexpected victory in Europe: "EU sanctions require unanimity to be implemented, so a Greek veto could block any further measures." And all thanks to the epic blunder by Brussels to allow a European nation to voice its opinion in a democratic fashion.
It wasn't just Zero Hedge who first suggested the Greek Russian pivot: here is RBS' Greg Gibbs who says that there are now "concerns Greek government may threaten to veto further Russian sanctions in exchange for debt relief fuels fear of conflict."
To be sure, Germany, whose theatrical opposition to money printing folded like Boehner's lawn chair last week, as it is now all too clear the preservation of German export dominance (and hence aversion to the DEM) and the sanctity of Deutsche Bank is what it is all about no matter the hyperinflationary concerns of the people, is quite furious that the grand ambitions of Europe's economic powerhouse - which as we reported moments ago has now officially entered deflation - have been crushed by tiny, depression-ridden Greece.
Here is Germany's economy minister Gabriel, who was on the tape earlier, casting fire and brimstone at Greece. From Reuters:


Greece should not burden the rest of Europe with its internal political debates,German Economy Minister Sigmar Gabriel said on Thursday, adding that Greece's own inequalities were to blame for problems that it tried to blame on its multilateral lenders.
Gabriel told parliament Greece should stay in the euro but the new leftist leader Alexis Tsipras must respect the terms of its bailout. Greece could not blame the "troika" of multilateral lenders for its own unfair distribution of wealth, he said.
"All democratic people must respect the democratic decision of voters and a newly-elected government's right to decide its course - but the rest of Europe's citizens should not have to expect changes in Greek politics to burden them," he said.

Of course, as long as the changes in Greek politics allowed the rest of Europe's citizens to continue to benefit at Greek expense, nobody batted an eyelid. But change the equation and all hell breaks loose.
And the final confirmation that suddenly tiny Greece may have all the leverage in Europe is that moments ago Germany's Foreign Minister Frank-Walter Steinmeier said that European sanctions on Russia are complicated by the "new Greek government."
The good news for Greece, of course, is that it now has all the optionality: it can use its veto power as a bargaining chip to unblock US foreign policy in Ukraine (because at the end of the day, Europe is merely losing as a result of the Russian sanctions) and demand a debt haircut in exchange for siding with John Kerry on further Russian "punishment." Or he may simply hold the line and hold off for a competing, better offer from Russia and the BRICs, whose leverage may be nominal  now that crude is plummeting, but if and when the last shale junk bond investor blows up and the US shale renaissance is over sending crude soaring right back to $100, then watch as the oil exporters are back with a bang, and dictating geopolitical terms.
And whatever happens, please don't remind Brussels that point 40 of Syriza's 40 Point Manifesto, aka the "nuclear option", is "Closure of all foreign bases in Greece and withdrawal from NATO."
It is so bad that Business New Europe went so far as to ask if the New Greek Government is "Russia's Trojan horse inside the EU?"
In any event, the European balance of power has just shifted and in a way that nobody anticipated:
The biggest winners: if only for now: Greece and Russia (and, while it will never be admitted, all those Europeans who desperately need the Russian import market).
The biggest losers: all the unelected Eurocrats in Brussels who at this moment are scratching their heads how to bring the bad news that there is no longer unanimity on Russian sanctions to John Kerry, and all thanks to a country nobody thought would dare to speak up.