Well here we go my friends.  The Nederland's government has been looking for an excuse to "increase security" and "limit the internet" and perhaps even.... close borders.

Tonight at 7pm GM, a well dressed young man entered the news studios of NOS in Hilversum Holland, and walked into the live studio with a gun and demanded "air time" for 10 minutes..... and says:  "
"The things that are going to be said (pause) those are very large world affairs. We were hired by the security service.""

I have two Dutch friends combing through all the data that has been coming out since the first moment the story broke in Holland.  Here is what we know- according to the media- so far:


Gunman who stormed Dutch broadcaster claimed to be hacker

Security forces are seen outside the Media Park in Hilversum, Netherlands, Thursday, Jan. 29, 2015. A gunman entered the headquarters of Dutch national broadcaster NOS outside Amsterdam on Thursday and demanded airtime on television, before being detained, company officials said. Jan de Jong, director of the NOS, told national radio "Someone got into the building" and added that the man had been taken into custody.(AP Photo/Peter Dejong)

HILVERSUM, Netherlands (AP) — A gunman who stormed into the headquarters of Dutch national broadcaster NOS demanding airtime Thursday night claimed to be from a "hackers' collective," according to a reporter who spoke to the man.
NOS was off-air for around an hour. When it came back, it showed recorded footage of the young man, wearing a black suit, white shirt and black tie, and carrying a pistol.
Speaking calmly to a man off-camera, the man said, "We are hired in by intelligence agencies." Shortly after, police arrived with their guns drawn and ordered the man to drop his weapon and put his hands up. At least five police officers then ordered him to turn around and lie down, which he did and he was arrested without a struggle.
Police said in a statement the man demanded airtime and threatened that bombs would go off at several locations around the Netherlands if his demand wasn't met. Special police units were searching the building.
There was no immediate indication that the incident was related to Islamic extremism. Nobody was injured and there were no reports of shots being fired.
NOS reporter Martijn Bink said he spoke to the man after he was arrested and he claimed to be from a hackers' collective. He didn't elaborate.
The broadcaster later reported on its website that the man had a silencer on the pistol and threatened a security guard, forcing him to take him upstairs to the editorial offices.
When the incident was over, NOS director Jan de Jong told the broadcaster that the headquarters had beefed up security in the aftermath of the attack on satirical newspaper Charlie Hebdo that left 12 people dead in Paris. The media park in Hilversum, home to many Dutch broadcasters, has been tightly guarded for years, since populist Dutch politician Pim Fortuyn was gunned down in a parking lot there in 2002.
While the broadcaster was off-air, a screen on the NOS1 channel read "Please be patient" in Dutch. All staff were evacuated from the building as the situation unfolded and remained outside nearly two hours later as police searched the building. NOS resumed broadcasting from a studio in The Hague.
Staff at NOS led the man into a studio near the studio where the 8 p.m. news was to have been broadcast live. In the studio, he spoke to the security guard he had forced to take him into the offices. He never appeared live on television.
Calls to NOS offices in Hilversum, about 20 kilometers (12 miles) east of Amsterdam, went unanswered Thursday night.

Answer me this:  How did a 19 year old young man, carrying a gun with a silencer, get into a studio that is live on the air, and calmly ask for 10 minutes of air time- when supposedly they have super security in place?

I will post the screen shots that I have collected of the various things that the research team have found so far: 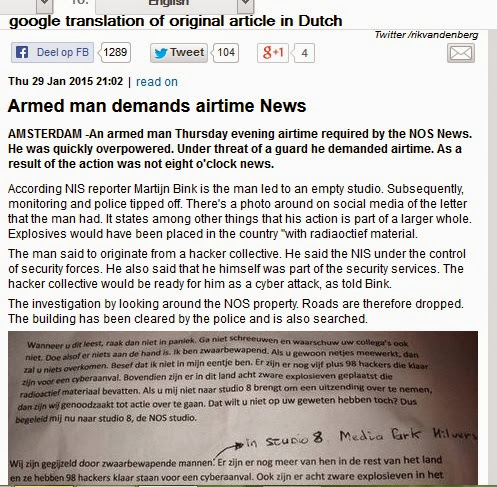 Translation of the note:

When you read this, do not panic. dont go yelling and do not go warn your collegues either. Act like everything is alright. I am heavily armed. when you co-operate nicely, then no harm will come to you. realize that i am not alone. there are 5 + 98 hackers ready to deploy a cyber attack. additionally there are 8 heavy explovies located around the country that contain radioactive material. when you do not bring me to studio 8 to overtake a broadcast, then we will be forced to take action. you do not want to be responsible for that right ? so guide me to studio 8 now, the NOS studio. 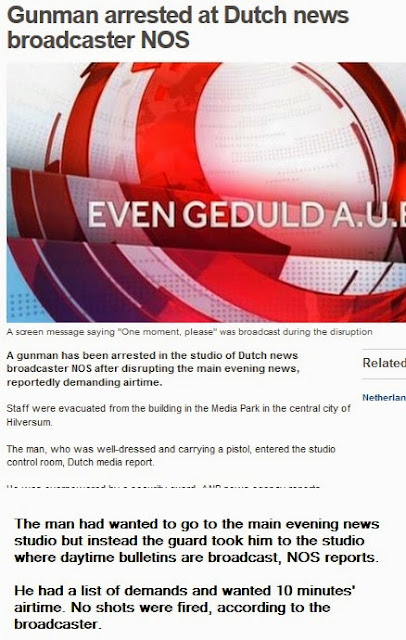 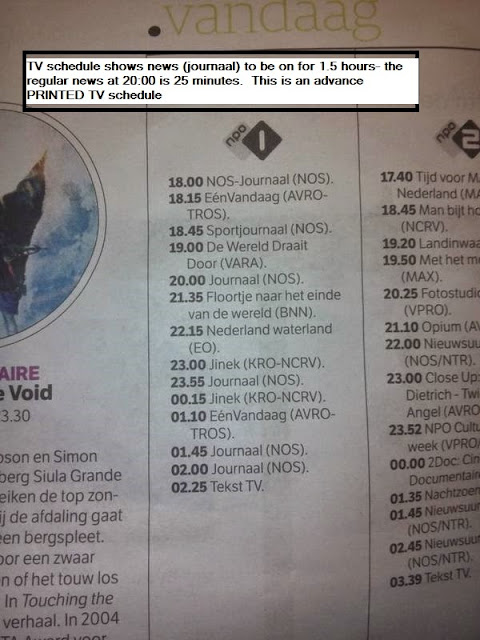 Why does the PRINTED, PRE-PUBLISHED  version of the Television schedule call for NOS Journaal tonight to be 1.5 hours long? The daily 8pm spot is always 25 minutes.


On television, NOS Journaal bulletins can be seen on channels of the Netherlands Public Broadcasting, the Dutch public broadcaster. Its flagship 25-minute bulletin airs at 8:00pm every night on NPO 1, formerly Nederland 1, - the most watched news programme in the Netherlands, with an audience of around 1.5 to two million viewers daily (around a fifth of the market share around that hour).


Statements have now been made by the media that the suspect is 19 years old, NOT an Islamic militant, NOT on any watch lists as a Jihadist.  They are stating that he recently lost his parents and social media spirals that he is "mentally unstable".


* Young man in suit arrested in television studio
* Man threatened security guard, suggested he had accomplices
* TV says man is student who lost parents, not on jihadist list
* Dutch minister says man appears to have acted alone (Adds police identifying man as 19-year-old Dutchman)
By Thomas Escritt and Toby Sterling
AMSTERDAM, Jan 29 (Reuters) - A 19-year-old Dutchman with a pistol forced his way into the studios of the national broadcaster NOS on Thursday demanding to be allowed to go on air, but was quickly arrested, officials said.
Wearing a black suit and tie, the man entered the studio after threatening a guard with a pistol, witnesses said. It was unclear how he passed through security, which was increased after the attacks in Paris earlier this month.
Footage aired on Dutch TV showed the man pacing in the studio with a black pistol behind his back.
He had intended to speak to the country on the most popular evening news broadcast, but was led to an empty studio by a quick-thinking security guard.
"This is taking too long," the man said. Then police stormed into the studio yelling, "Drop it! Drop it! And get on your knees!". He dropped the gun, saying, "I dropped it. It's dropped", and the police put handcuffs on him and took him away.
The man lives in the central Dutch town of Pijnacker, near the university town Delft, officials said, declining to provide details. They refused to comment on media reports that he was a student whose parents had recently died and that he was not on a watchlist of Islamist militants.
He was being questioned and could be charged with kidnapping, possession of a firearm and threatening people with a weapon, prosecutor Johan Bac said at a press conference.
No one was hurt, but the NOS television broadcaster cancelled its two main nightly newscasts.
The man's motive was unclear; the NOS footage showed him saying, "The things that are going to be said (pause) those are very large world affairs. We were hired by the security service."
Police special forces swept the building for explosives and found nothing, police spokesman Christine Scholts said.
"We are currently investigating who this man is and what he wants," she said. The police were looking into claims that he had accomplices around the country with explosives.
"He took the security guard hostage and said he wanted air time. If they didn't give it to him, he said there would be bombs in different places in the Netherlands that would explode if he didn't get time on TV," Scholts said.
The threats were reportedly also contained in a letter that the man took to the studio, a purported copy of which was aired by the RTL news channel.
"Realise that I am not on my own," it said. "Furthermore, eight high explosives have been planted that contain radioactive material. If you don't take me to studio 8 to make my broadcast, we will be forced to step into action."
Reuters could not verify the authenticity of the letter.
Dutch Minister for Security and Justice Ivo Opstelten told the ANP national news agency the man appeared to have acted alone.
Security has been tightened across Europe since jihadist attacks on the offices of the satirical weekly Charlie Hebdo and a kosher supermarket in Paris this month, as well as the killing of two gunmen in Belgium during raids on an Islamist group that authorities said were planning to attack police.
NOS television said the gunman appeared to be a student who had recently lost both parents. It also said he did not figure on security services' lists of suspected Islamist militants.
NOS produces the most widely watched television newscast in the Netherlands and is based in the main national broadcast park in Hilversum.
Security has been tight there since populist politician Pim Fortuyn was shot outside a studio in 2002.
As the gunman entered the studios on Thursday, NOS's main news channel displayed a message that read, "In connection with circumstances, no broadcast is available at this time."

And of course, there has to be an official response- but isn't it strange that the supposed "gunman" was taken down at 8:12 pm, and by 8:40 they release this: 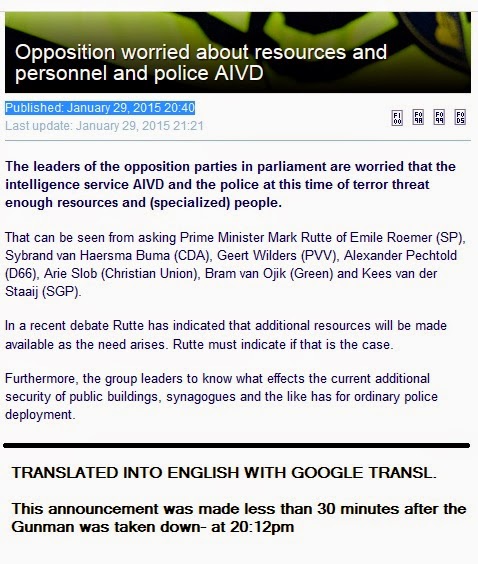 Above  are a few more screen shots and below are links to further articles:

Opposition worried about resources and personnel and police AIVD
http://translate.google.com/translate?hl=en&langpair=nl|en&u=http://www.nu.nl/politiek/3982465/oppositie-ongerust-middelen-en-personeel-aivd-en-politie.html