The Red Arches of Babylon

Holy shit!  the Empire State Building was also lit up with red lights on the 20th!!! ...... for three nights? Interesting folks!!

As I reported two days ago in the "TN: Arch of Triumph" and the TN report "To Ba'al or not to Ba'al"
we've reviewed all the Arch of Ba'al/Triumph details as they've come up.  After publishing each of them I've wondered just how much more crazy this can get....

.... and I wasn't disappointed when last night I saw a picture of the "Arch of Triumph" in Trafalgar Square, London all lit up with bright red flood lights. 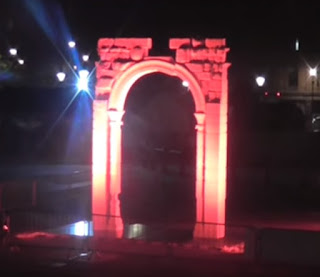 This video was sent to me by a friend this morning.  While I don't agree with the videographers religious message, the first 1 minute and 40 seconds of this video is all you have to watch to really get the idea.

While watching it with another friend, Ged, we discussed the fact that this Friday is the first day of the Judaic holiday of  Passover.  For those of you not familiar with the history of passover, here is a brief synopsis.  I've highlighted a few basic points.

Passover or Pesach (/ˈpɛsɑːx, ˈpeɪsɑːx/;[4] from Hebrew פֶּסַח Pesah, Pesakh, Assyrian; ܦܸܨܚܵܐ"piskha"), is an important,biblically derived Jewish festival. The Jewish people celebrate Passover as a commemoration of their liberation by Godfrom slavery in Egypt and their freedom as a nation under the leadership of Moses. It commemorates the story of the Exodus as described in the Hebrew Bible especially in the Book of Exodus, in which the Israelites were freed from slavery in Egypt.....In the narrative of the Exodus, the Bible tells that God helped the Children of Israel escape from their slavery in Egypt by inflicting ten plagues upon the ancient Egyptians before the Pharaoh would release his Israelite slaves; the tenth and worst of the plagues was the death of the Egyptian first-born.The Israelites were instructed to mark the doorposts of their homes with the blood of a slaughtered spring lamb and, upon seeing this, the spirit of the Lord knew to pass over the first-born in these homes, hence the English name of the holiday.[9].........Scholarly consensus dates the origin of the festival to a period earlier than the Exodus.[18] The Passover ritual, prior to Deuteronomy, is widely thought to have its origins in an apotropaic rite, unrelated to the Exodus, to ensure the protection of a family home, a rite conducted wholly within a clan. Hyssop was employed to daub the blood of a slaughtered sheep on the lintels and door posts to ensure that demonic forces could not enter the home.... once the Priestly Code was promulgated, the exodus narrative took on a central function, as the apotropaic rite was, arguably, amalgamated with the Canaanite agricultural festival of spring which was a ceremony of Unleavened Bread, connected with the barley harvest. As the Exodus motif grew, the original function and symbolism of these double origins was lost.[20]Several motifs replicate the features associated with the Mesopotamian Akitu festival.[21]


Notice the the direct connection to the Canaanites and Mesopotamia.... which also includes Babylon.  The Festival of Akitu is a very interesting rite that also lasts for over a week, and is considered the Babylonian "New Year".  I've just copied a couple of the basic pieces of information about Akitu, but the history is well worth reading up on.

The name Akitu is very ancient. In the third millennium BCE, the Sumerian population of southern Mesopotamia celebrated the á-ki-ti-še-gur10-ku5, the festival of the sowing of barley. It was celebrated in the first month of the year, that is in March/April. In the Babylonian calendar, this month was known as Nisannu (and in the modern Jewish calendar is still called Nisan). Since the festival was celebrated on the first days of the Babylonian year, we can call it a New year's festival. In fact, the ancient Babylonians already called it rêš šattim, "beginning of the year".The festival - better: conglomerate of festivities - was celebrated on two locations in Babylon: in the temple of the supreme god Marduk, the Esagila, and the 'house of the New year' which was situated north of the city. The two gods who were in the center of the festival were Nabû and his father, the supreme god Marduk, who was in the first millenium BCE usually called 'Bêl', Lord, because his real name was considered too holy to be pronounced............What happened in the house of the New year on 9-10 Nisannu, is not known, but it seems that sacrifices were made by the king and that the spoils of war were presented to the gods. On 11 Nisannu, the gods returned to the Esagila, where they repeated their parliament. After this, they saw Nabû off, and went home.The Akitu festival continued for centuries, and not only in Babylon. In Palmyra, the temple of Baal was inaugurated on the same date as Akitu. At the beginning of the third century CE, it was still celebated in Emessa in Syria, to honor the god Elagabal; the Roman emperorHeliogabalus (218-222) even introduced the festival in Italy.note

So, we have a  replica of a Syrian "Triumph" Arch, from the City of Palmyra, which stood just outside of the Temple of Ba'al, place in the "Heart of London", lit up with bright red lights, on April 19- the first day of the Feast of Moloch(?)- to stand for 3 days and 3 nights (which is a highly ritualized time frame), till the first day of the Judaic holiday of Passover, during which the ancient Israelite's use to paint their door frames (ie: the entry way of the house) with the blood of a sacrificial lamb to commemorate the "exodus" from Egypt, which is also an ancient Babylonian festival of the New Year, which also involved sacrifices, and was originally held in the city of Palmyra..... Oh and that of course, the God Janus is the god of the New Year....

... I wonder if Obama will be giving Elizabeth any spoils of war for her birthday?