Obama Presidential Memorandum : THE DISTRACTION... or not?

edited 3/28/2015 at 2:43pm GMT to add:
Well this is just getting weirder and weirder!  when I got the message saying it's a hoax and to look at the web address, I immediately cross referenced the two sites.  I looked on the www.whitehouse.gov site to try and find this memorandum and couldn't see it there..... hence, having seen what can be accomplished with a creative web designer, ie: the "BBC" article that said that Charlie Hebdo was a false flag- my alarm bells immediately went off.  The first thing I did was to go back to the www.whitehouse.gov official site and look for that memorandum.  I couldn't find it.  Since I could not find it, I immediately assumed that it was yet another fake website.

Funnily enough, the person who sent me the info said:  "I found a bunch of posts that all linked back to a mgov. link instead of everything else and it was registered to a private company."..... which when you consider the fact that the Government of the United States is a corporation (a non-profit religious corporation to boot!), the fact that the website is linked to a "private company" isn't really all that shocking, lol.

Long and short of it,  I was just sent the link from the official whitehouse.gov website for the memorandum:  https://www.whitehouse.gov/the-press-office/2015/03/25/presidential-memorandum-delegation-authority-pursuant-section-1236b2-nat

The m.whitehouse.gov site is a mobile app: 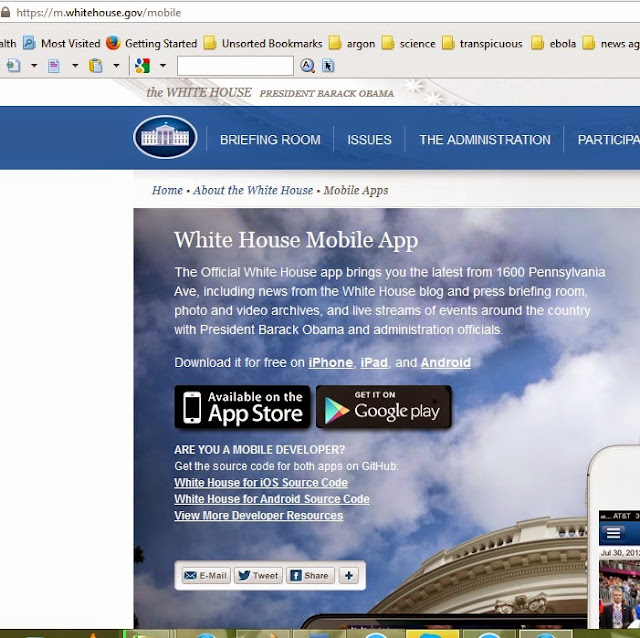 Sooooooo..... I was wrong, apparently.  This IS an official memorandum signed by Obama.   Which of course leads to the original question:  WHY is he giving power over the US Military involvement in Iraq over to Kerry?


This memorandum is NOT from the official Whitehouse.gov web site.  If you look at the site, it's www.m.whitehouse.gov

Ahhhhhh so cleaver and what an amazing distraction to be put out!!!!  THAT my friends was one of the most cleaver pieces of distraction I've seen pulled in a long time!  The Alternative Media ran in circles analyzing this for days... meanwhile in the opposite direction, "THEY" are running in circles to cover their tracks.  CERN was a failure, AGAIN.  They now have a huge amount of people all over the world dissecting the Germanwings Plane crash and pointing out the lies and fabrications faster than "They" can almost pump them out.  The Saudi's invade Yemen, with the US on board, yet the US is working with Iran in Iraq to destroy "ISIS" in Tikrit.  The media is calling each side out for playing a "proxy war" game with Yemen as the chess board, yet no one seems to see the hypocrisy of these statements when BOTH sides are playing the same proxy war scenario.  US sends tanks to the Ukraine, in violation of the Minsk peace treatise, just two days after authorizing a Bill to send "Offensive Weapons", and heavy artillery to the Ukraine .....

OH WHAT AN AMAZING PIECE OF DISTRACTION THIS HAS BEEN!!!!!

Now everyone needs to pull in and analyze what we all missed while we were dissecting this fake memorandum.

ps: I'm keeping the article below live because at some point we all need to really look at what we missed and what the message in this was.

Justin of SITSSHOW once again pulled an excellent article together out of all the pieces floating around the internet, giving a really good look at the information that is available. 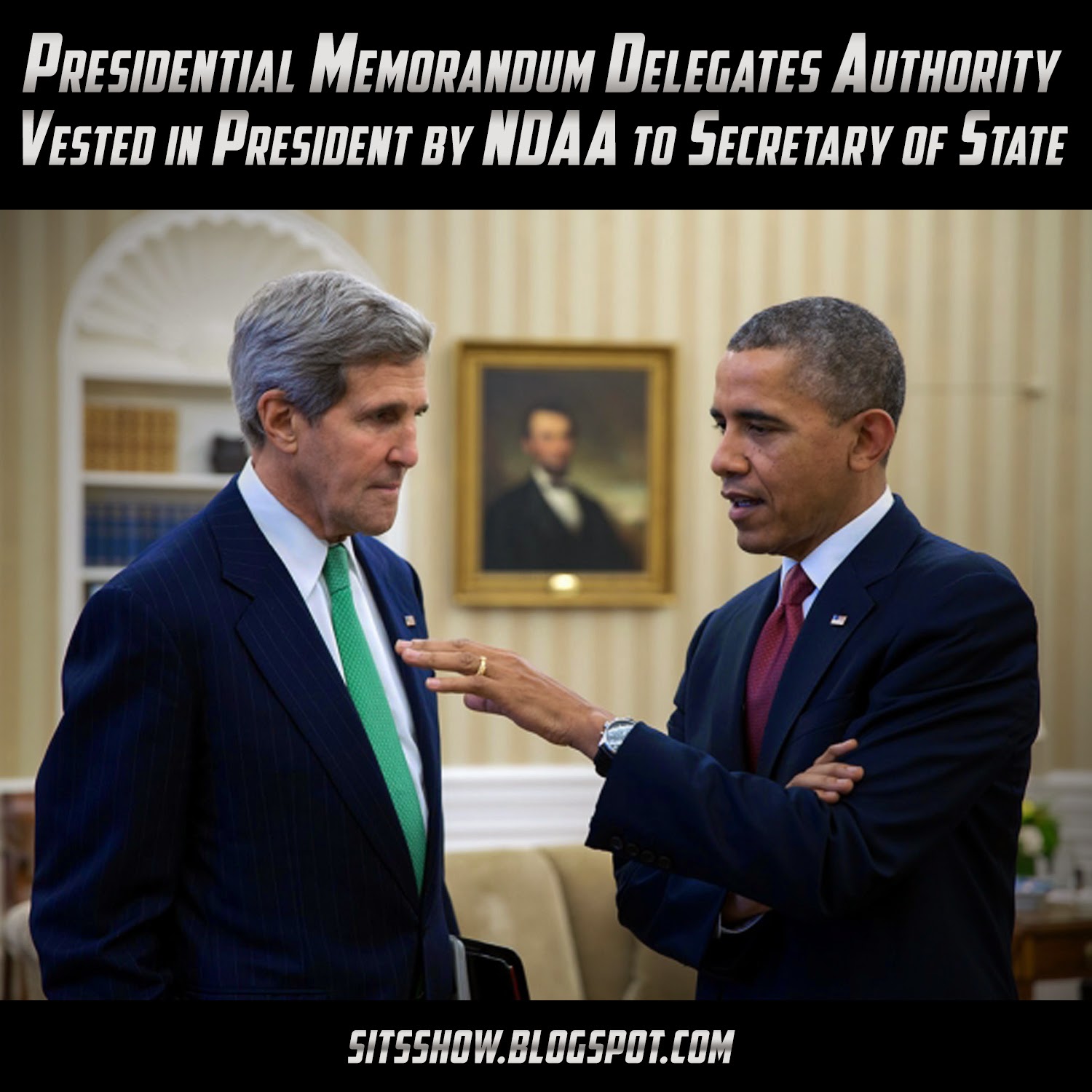 We included the Presidential Memorandum and Sec 1236 of the NDAA at the bottom of this post along with the articles spoken of in this video so you can read it as well. There are no coincidences. The greater meaning behind these moves has possibly not surfaced.

"Kerry is hoping to seal a framework deal to roll back Iran's nuclear program in exchange for sanctions relief in make-or-break talks with Iranian Foreign Minister Mohammad Javad Zarif. The top diplomats from Britain, China, France, Germany and Russia would join if the U.S. and Iran are close to an agreement.

The pressure is high. The seven nations have set themselves a March 31 deadline for the outline of a final accord they hope to seal by the end of June. Both President Barack Obama and Iran's Ayatollah Ali Khamenei have spoken against what would be a third extension of the talks.


And opponents, among them wary American allies in the Middle East and hardliners in Iran and in Congress, stand ready to complicate the process if negotiators cannot reach a breakthrough in the next six days. American lawmakers have threatened new sanctions on Iran as well as the establishment of a process which would allow them to vote down any final accord.

The United States and its partners are trying to get Iran to cut the number of centrifuges it uses to enrich uranium, material that can be used in warheads, and agree to other restrictions on what the Islamic Republic insists is a peaceful nuclear program."

The Pentagon has declassified a document that was once labeled “top-secret,” which goes into sophisticated detail about Israel’s nuclear weapons program. The document was released quietly just prior to Israeli Prime Minister Benjamin Netanyahu’s March 3 speech to a joint session of Congress.
March 25, 2015

Israel has never officially confirmed or denied the existence of a nuclear weapon’s program within its borders.
The Pentagon declassified sections covering Israel’s nuclear program, but “kept sections on Italy, France, West Germany and other NATO countries classified, with those sections blocked out in the document,” Israel National News reported.
The 386-page top-secret memo, titled, “Critical Technological Assessment in Israel and NATO Nations,” goes into great detail about how Israel turned into a nuclear power in the 1970s and 80s.
“As far as nuclear technology is concerned the Israelis are roughly where the U.S. was in the fission weapon field in about 1955 to 1960,” the report assesses.
The report was written by the Institute for Defense Analysis in 1987, which was federally funded and contracted by the Pentagon.
Israel is “developing the kind of codes which will enable them to make hydrogen bombs. That is, codes which detail fission and fusion processes on a microscopic and macroscopic level,” the report states.
The report commends that the Israelis found “ingeniously clever” solutions to solve its problems in advancing the nuclear program, largely due to the “ingenious Israeli inventions” at a “key research and development laboratory in Israel.”
The Pentagon declassified the document after Grant Smith, an activist who heads a radical anti-Israel group, filed a Freedom of Information Act request, according to reports.
Smith’s Institute for Research: Middle Eastern Policy organizes an anti-Israel conference each year in Washington, D.C. Last year, the conference featured speakers from anti-Semitic and pro-Islamist publications. During the Q & A session, a speaker openly called for education about the supposed “Zionist-Nazi collaboration” during the Holocaust, while another endorsed the possibility that “Israel had a hand in 9/11.”