This could be some serious shit my friends.


Does this sound familiar?

This is exactly what was seen TWICE in Yemen in May:  first blast, smaller, followed by a huge blast approximately 20-30 seconds later.  The Yemen bombs in May were pony nukes- I sent the videos to several ex military artillery specialists who all confirmed that these were low yield nuclear bombs.

Now this in China.  Notice the same sparkles and lightening.

I will be following this very closely.


Massive explosions have hit China's northern port city of Tianjin, leaving at least 13 people dead and hundreds more injured.
State media said the blasts happened in a warehouse storing "dangerous and chemical goods" in an industrial area of the city.
Pictures and video on social media showed flames lighting up the sky, and buildings are said to have collapsed.
Hospitals are reported to be overwhelmed with casualties.
The editor of the BBC's Chinese Service, Raymond Li, says all indications are that it is an industrial accident.
State broadcaster China Central Television (CCTV) said a shipment of explosives had detonated but this was not confirmed.
The first explosion at about 23:30 (16:30 GMT) was followed by another seconds later. Shockwaves were felt several kilometres away.
The China Earthquake Networks Centre said the magnitude of the first explosion was the equivalent of detonating three tons of TNT, while the second was the equivalent of 21 tons of the explosive.

Here are the Still shots I grabbed from the original video of the first bombing in Yemen back in May 2015 that I reported on in Transpicuous News: 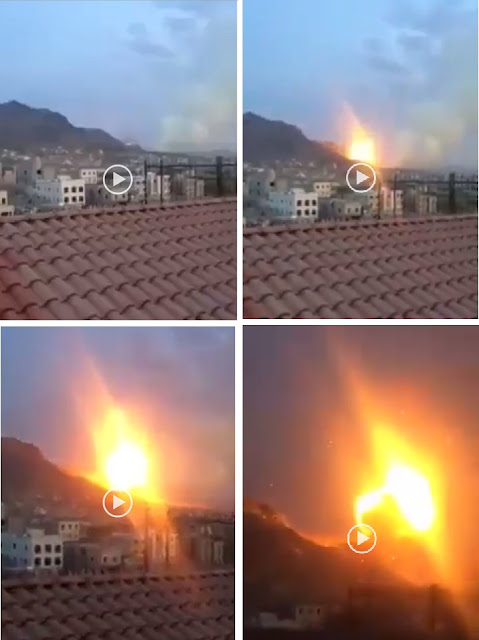 I couldn't' find the original video that I posted out back in May- but this is another video of the same two explosions.

Email ThisBlogThis!Share to TwitterShare to FacebookShare to Pinterest
Labels: massive explosion in China, Nuclear blast in China, Same type of explosion in china as in Yemen, Tianjin explosion