We are very sorry for the delay in this weeks Transpicuous News Show.  If you are one of the few that saw this posting when it originally went up, you probably realized very quickly that it contained the video for episode 1.... not episode 2.  Opps.  Well, after 12 attempts over the course of 5 days, we've finally managed to upload this weeks (I mean, last weeks) episode: Zombie Apocalypse 101.

In newer news, the biggest news of the day (week, month, year....) is that we are MOVING!!!  Yes, The One Network gang are all moving to a new town that actually has INTERNET!!!!!!!  Woohooooo!  So, beginning in the next week or two, we will be changing to live broadcasts!!!  TN will go out at set times weekly AND will also include on the spot updates of big stories as they break.... once we have our "studio" space set up and ready to go.

Thank you to everyone for your patience while we move forward to create the new paradigm that WE want.

Todays News report will venture into quite a few realms of disbelief and no doubt will have a few moments of head/desk contact, and face/palm ridiculousness as we take a look at the main stream news for the past few weeks. 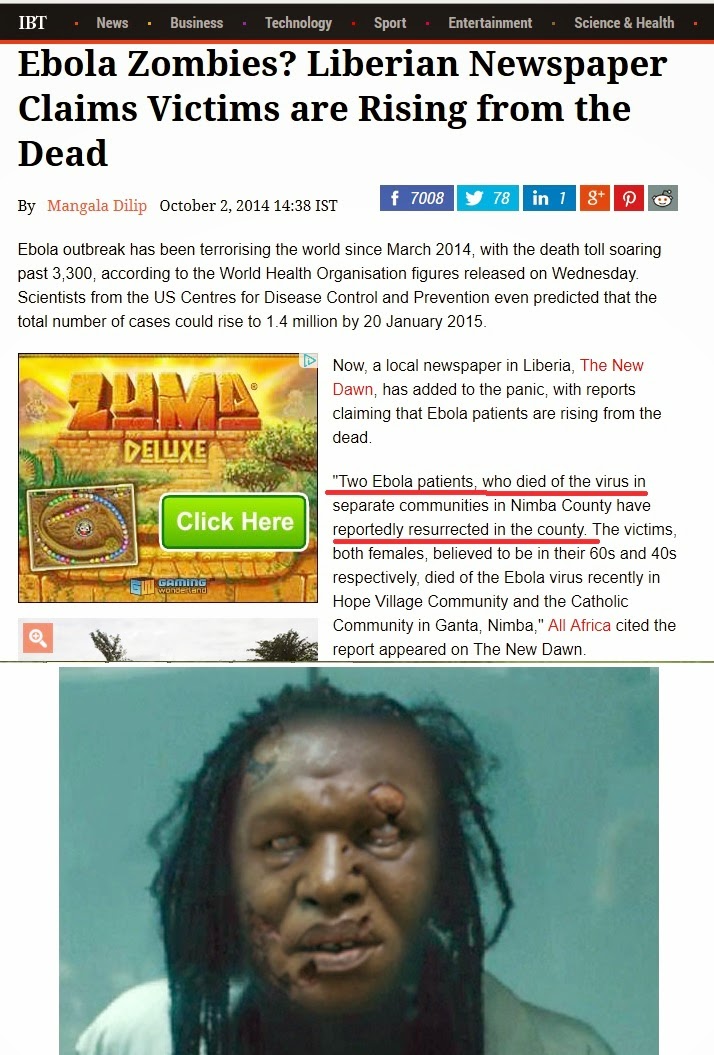 A local newspaper in Liberia, The New Dawn, has added to the panic, with reports claiming that Ebola patients are rising from the dead.
"Two Ebola patients, who died of the virus in separate communities in Nimba County have reportedly resurrected in the county. The victims, both females, believed to be in their 60s and 40s respectively, died of the Ebola virus recently in Hope Village Community and the Catholic Community in Ganta, Nimba,".... 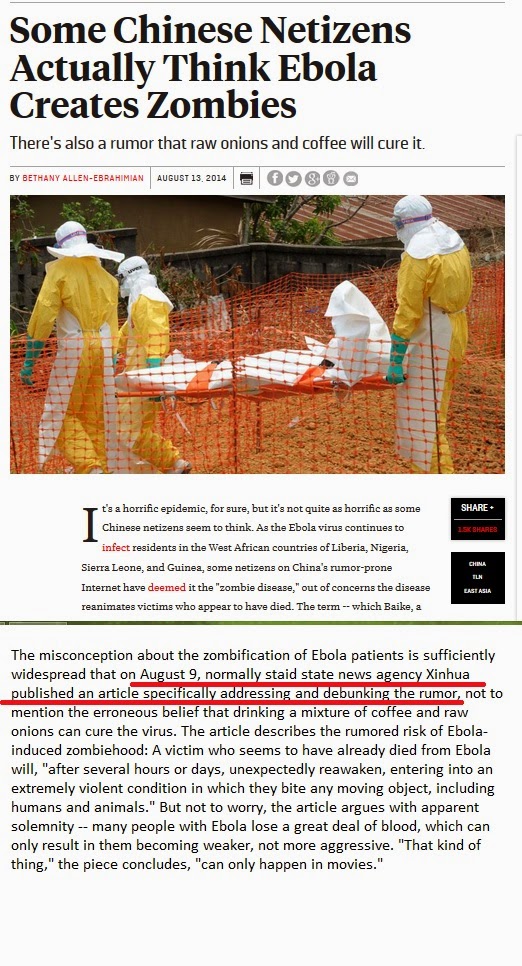 The misconception about the zombification of Ebola patients is sufficiently widespread that on August 9, normally staid state news agency Xinhua published an article specifically addressing and debunking the rumor, not to mention the erroneous belief that drinking a mixture of coffee and raw onions can cure the virus. The article describes the rumored risk of Ebola-induced zombiehood: A victim who seems to have already died from Ebola will, "after several hours or days, unexpectedly reawaken, entering into an extremely violent condition in which they bite any moving object, including humans and animals." But not to worry, the article argues with apparent solemnity -- many people with Ebola lose a great deal of blood, which can only result in them becoming weaker, not more aggressive. "That kind of thing," the piece concludes, "can only happen in movies."

So apparently we are talking about the zombies from Shaun of the dead and Zombieland, not the Resident evil kinda undead zombies. 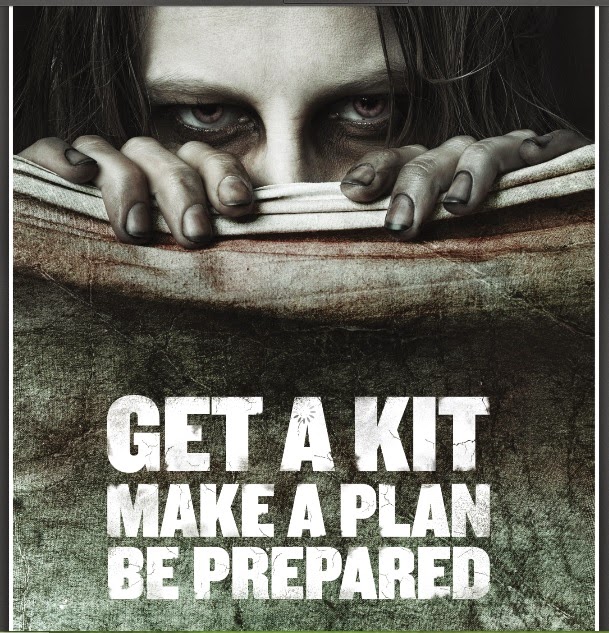 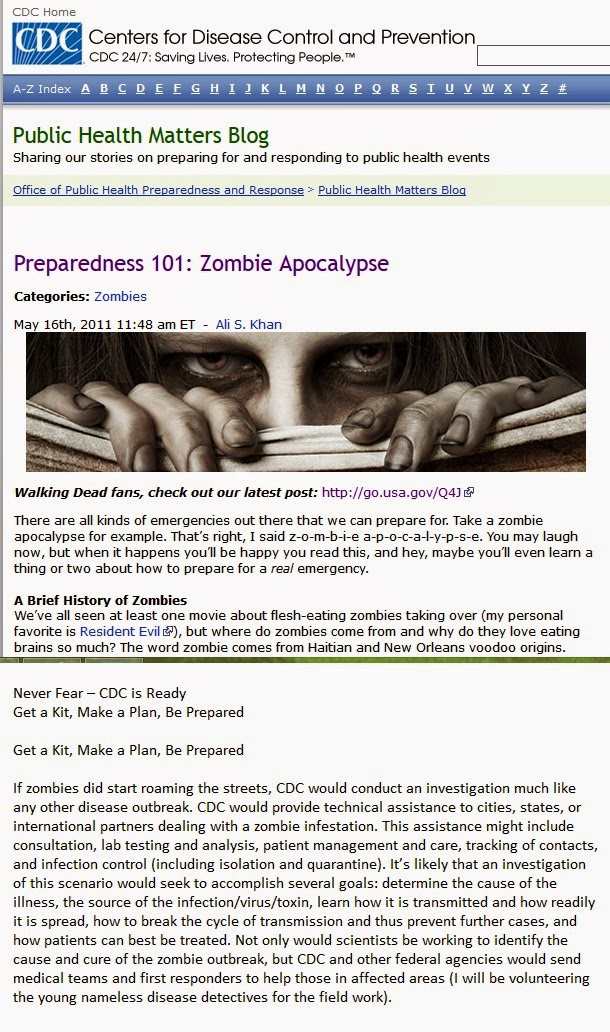 Speaking of zombies, George Bush JR was chatting with the press this past week...... 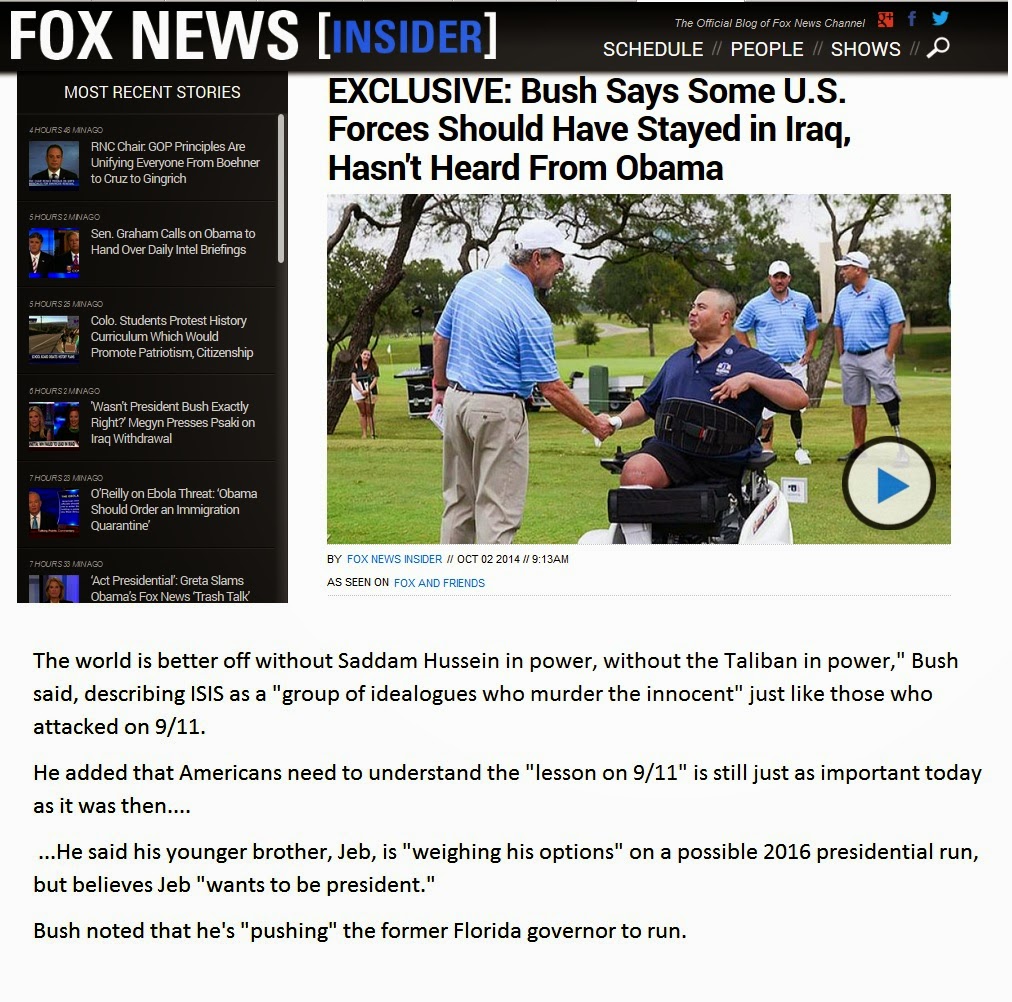 EXCLUSIVE: Bush Says Some U.S. Forces Should Have Stayed in Iraq, Hasn't Heard From Obama
The world is better off without Saddam Hussein in power, without the Taliban in power," Bush said, describing ISIS as a "group of idealogues who murder the innocent" just like those who attacked on 9/11.
He added that Americans need to understand the "lesson on 9/11" is still just as important today as it was then....
...He said his younger brother, Jeb, is "weighing his options" on a possible 2016 presidential run, but believes Jeb "wants to be president."
Bush noted that he's "pushing" the former Florida governor to run. 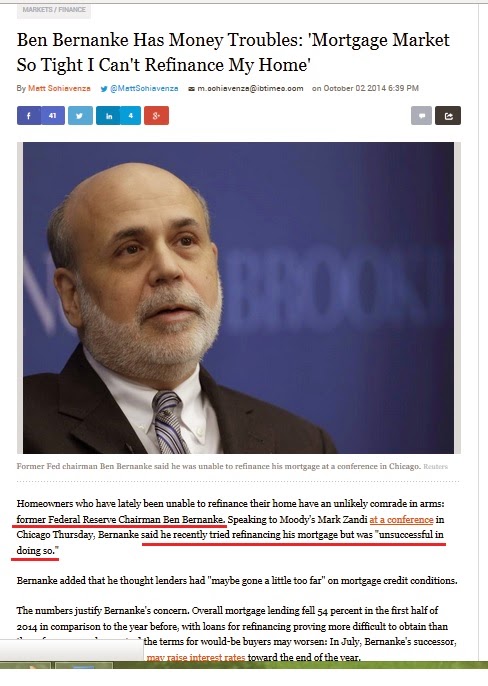 Homeowners who have lately been unable to refinance their home have an unlikely comrade in arms: former Federal Reserve Chairman Ben Bernanke. Speaking to Moody's Mark Zandi at a conference in Chicago Thursday, Bernanke said he recently tried refinancing his mortgage but was "unsuccessful in doing so." 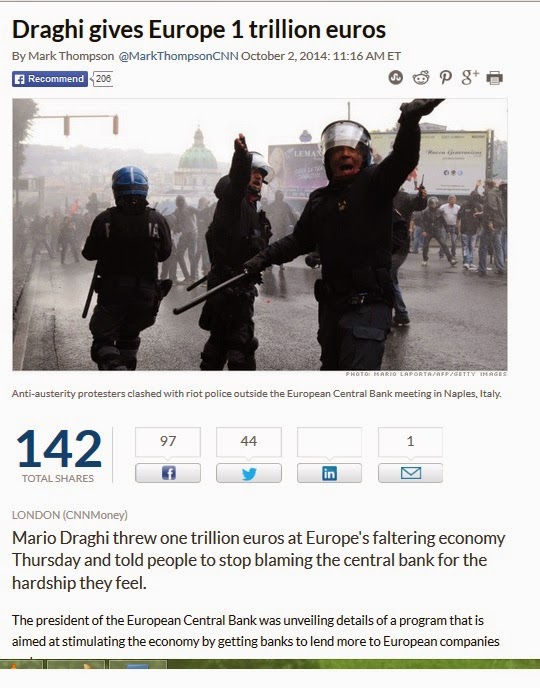 Draghi gives Europe 1 trillion euros
Mario Draghi threw one trillion euros at Europe's faltering economy Thursday and told people to stop blaming the central bank for the hardship they feel.
...Loans and mortgages worth as much as one trillion euros ($1.3 trillion) -- including some junk-rated assets from Greece and Cyprus -- qualify as assets that will be purchased by the ECB over two years. There are conditions attached and no guarantee that the central bank will buy them all. 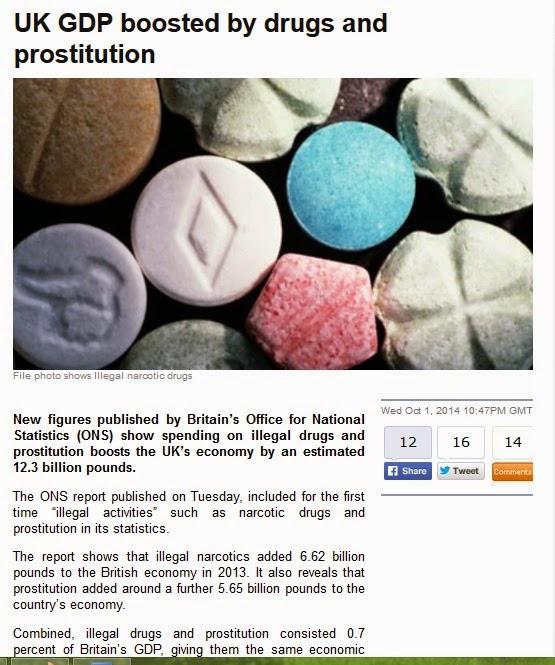 The ONS report published on Tuesday, included for the first time “illegal activities” such as narcotic drugs and prostitution in its statistics. 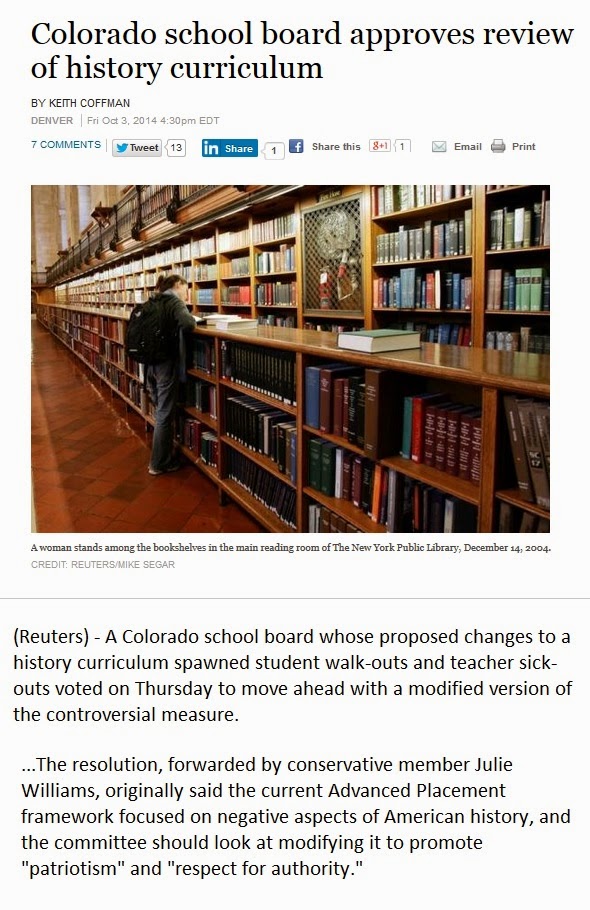 
Now let's look at some of the older stories that I was researching and following over the past two weeks.  This might be considered "old news", but there are aspects to some of these pieces that most alternative (and of course all main stream) media have not highlighted.


So a few weeks ago US Congress voted to give themselves some "money" to play with, invade Syria, and send troops to Africa to "help".... plus a few other quiet additives. 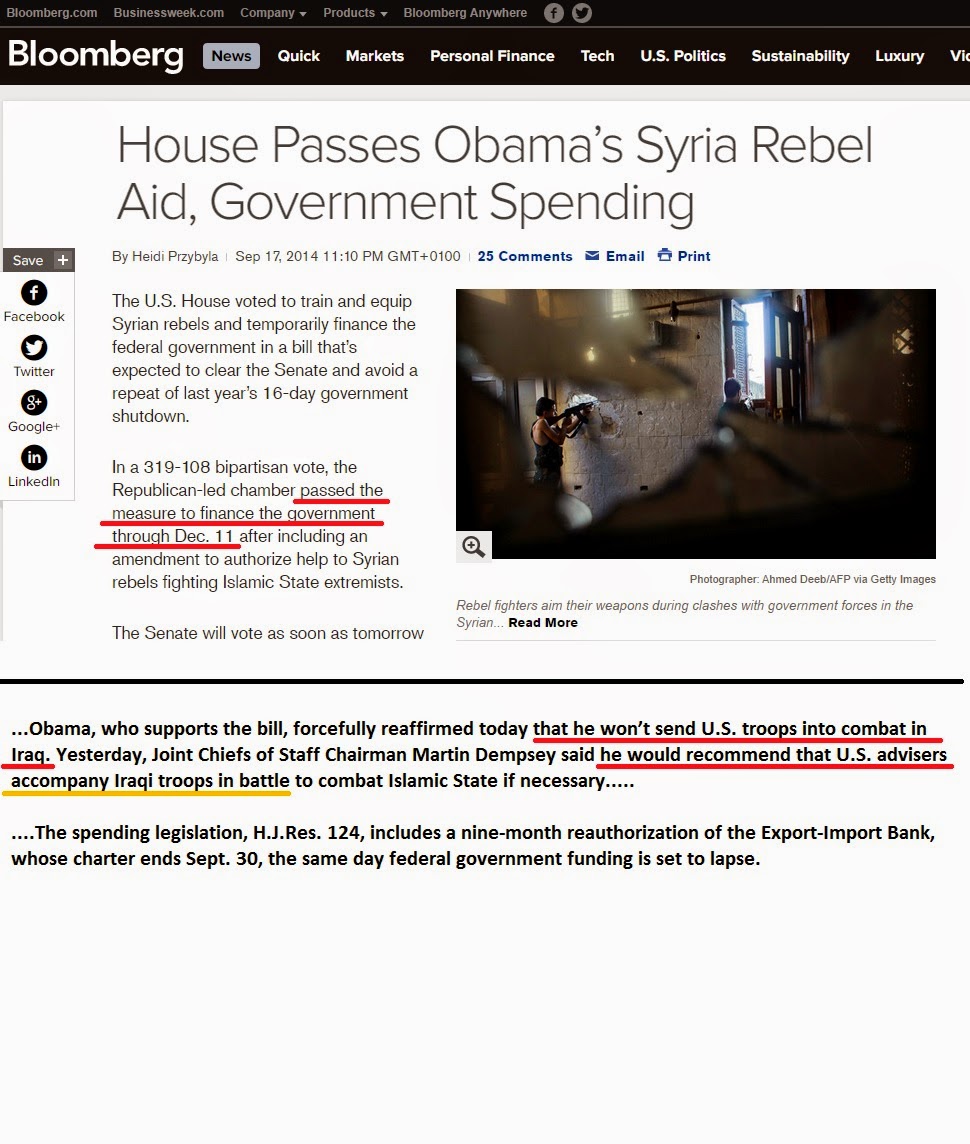 "finance the gov till Dec first.... after the congressional elections 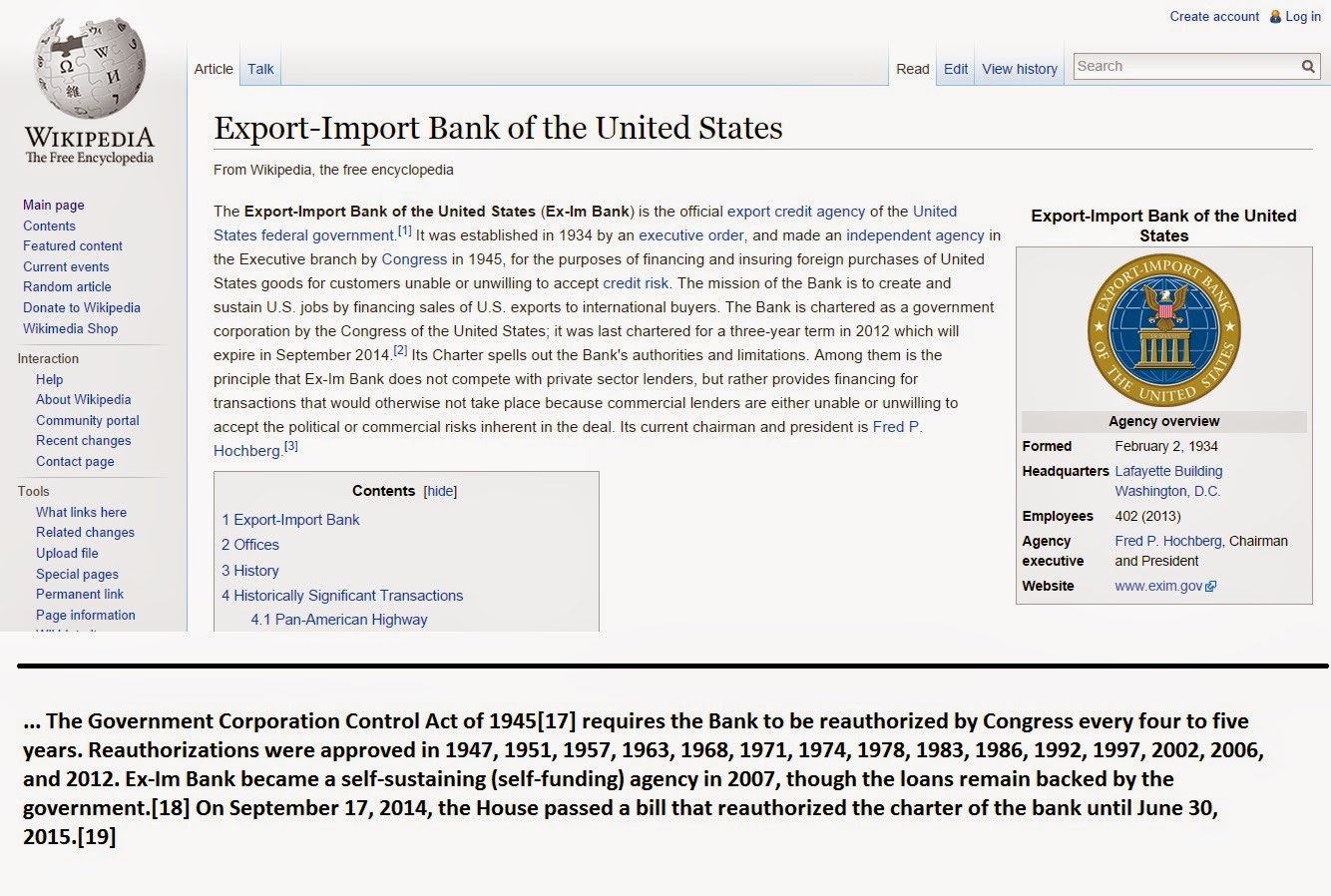 The Burma Road- which was used by China to annex Burma, among a whole lot of other shit

and the Marshal Plan, in which almost 6 trillion dollars (by 2014 standards) was splashed out for US corporations to control the european market under the guise of "saving the people from poverty",.... among other things.
But there is even more fun to be had when you read the Wiki page under "criticism"!!

The Bank has come under criticism for favoring special interests ahead of those of the U.S. taxpayer. These interests include that of heavily subsidized corporations such as Boeing or Enron as well as those of well-connected foreign governments and nationals (such as a 1996 $120 million low-interest loan to theChina National Nuclear Power Corporation (CNNP)).[43] 65% of loan guarantees over 2007 and 2008 went to companies purchasing Boeing aircraft.[44] In 2012, the Bank's loan guarantees became even more skewed, with 82 percent of them going to Boeing customers.[45] There are many unseen costs created by the Export-Import Bank's subsidies, including artificially raising the price of new airplanes and potentially adding $2 billion to the deficit over the next decade.[46] 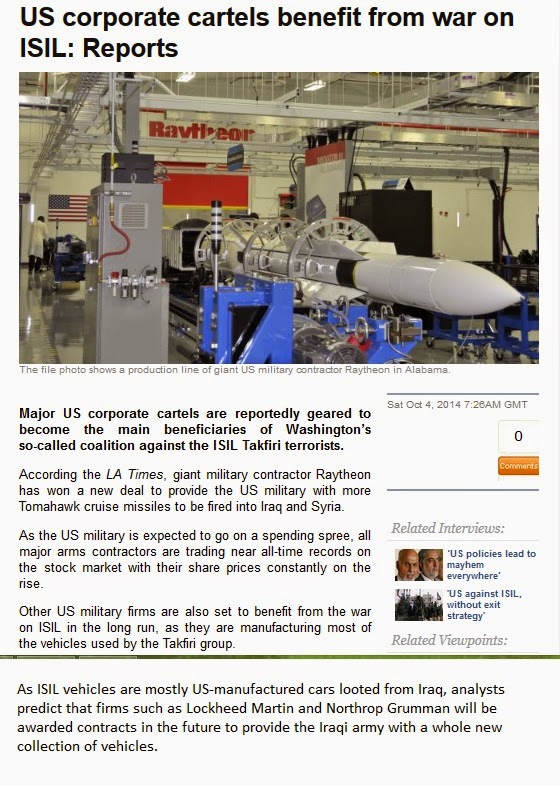 US corporate cartels benefit from war on ISIL: Reports

Major US corporate cartels are reportedly geared to become the main beneficiaries of Washington’s so-called coalition against the ISIL Takfiri terrorists.
As ISIL vehicles are mostly US-manufactured cars looted from Iraq, analysts predict that firms such as Lockheed Martin and Northrop Grumman will be awarded contracts in the future to provide the Iraqi army with a whole new collection of vehicles. 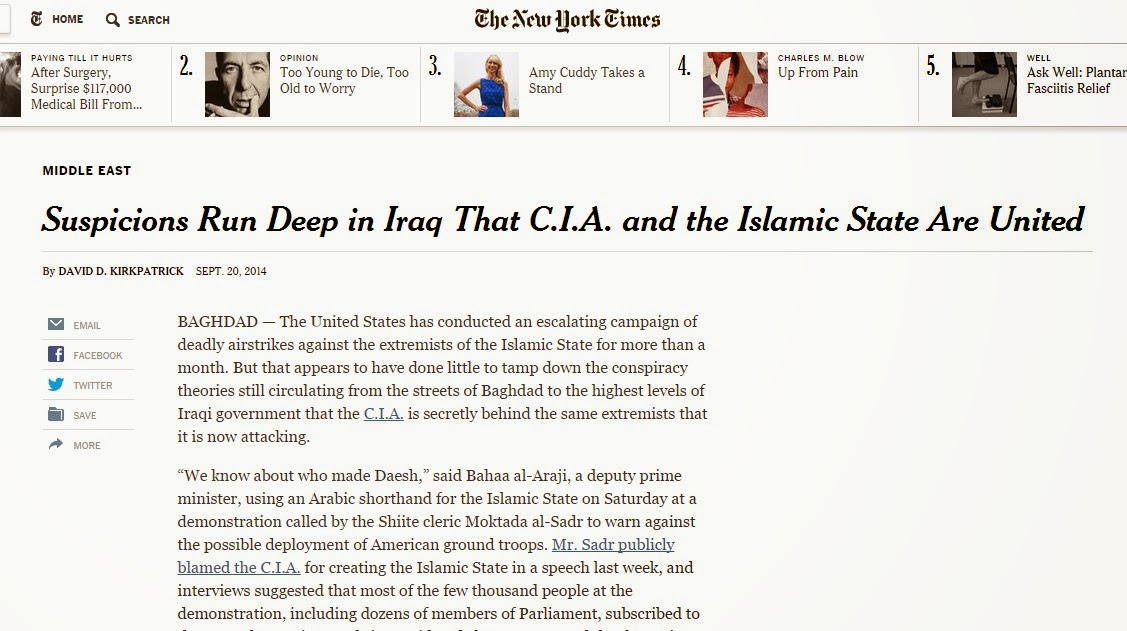 BAGHDAD — The United States has conducted an escalating campaign of deadly airstrikes against the extremists of the Islamic State for more than a month. But that appears to have done little to tamp down the conspiracy theories still circulating from the streets of Baghdad to the highest levels of Iraqi government that the C.I.A. is secretly behind the same extremists that it is now attacking. 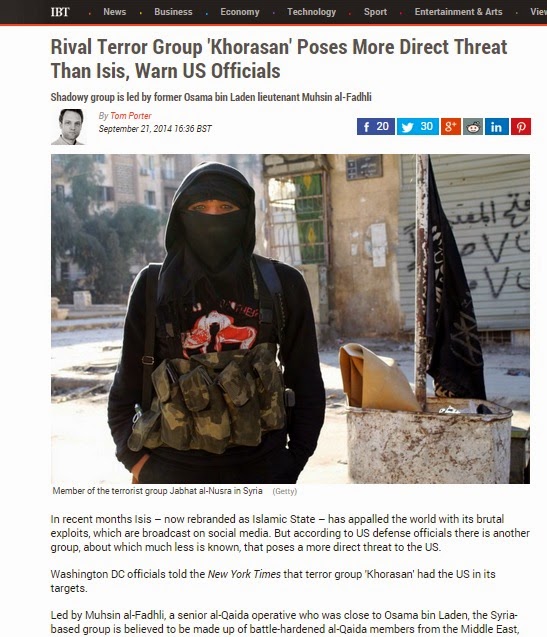 In recent months Isis – now rebranded as Islamic State – has appalled the world with its brutal exploits, which are broadcast on social media. But according to US defense officials there is another group, about which much less is known, that poses a more direct threat to the US.

Washington DC officials told the New York Times that terror group 'Khorasan' had the US in its targets. 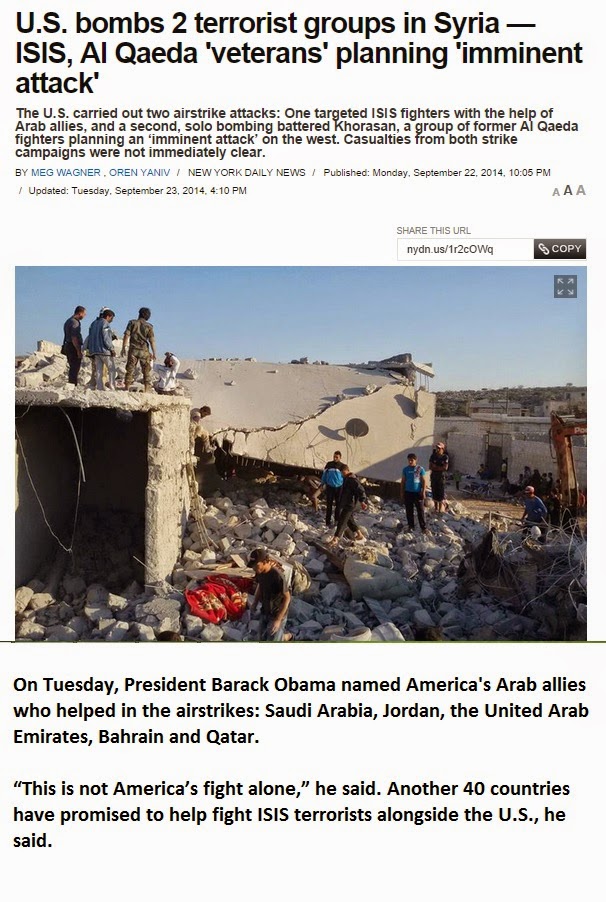 
Yet, who is funding the purported terrorist group ISIS?

Of course the question remains:  Is it live? Or is it Memorex?  We have witnessed over and over again the main stream medias penchant for publishing old pictures and claiming that they are"live" coverage, or pictures of completely different wars/bombings/attacks. 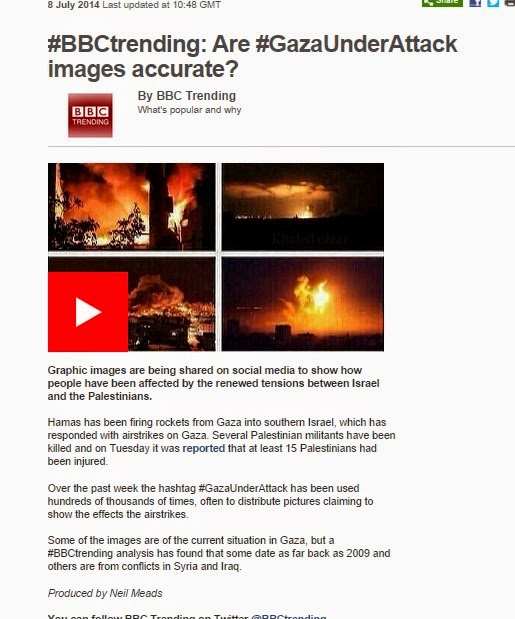 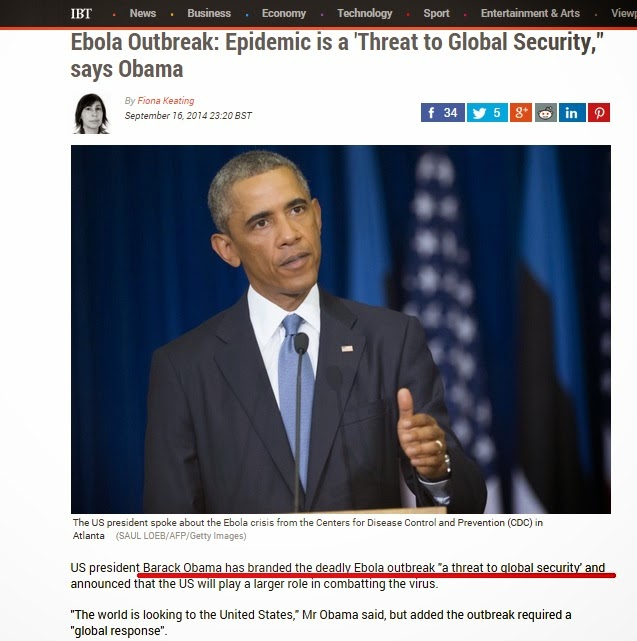 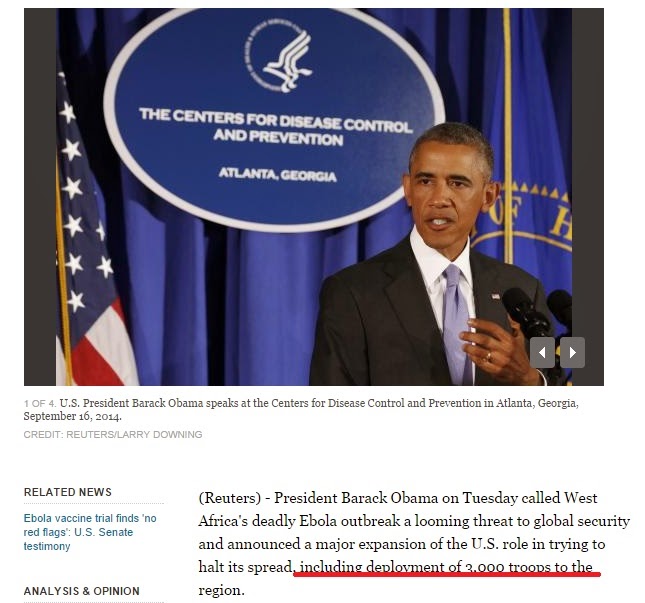 So of course you can be sure that that 3000 troops will expand exponentially over the next few weeks... quietly of course.  But that was 12 days ago... we're already now up to 4500 troops.

But don't worry Africa!  There is a silver lining to this terrible "Ebola" outbreak: 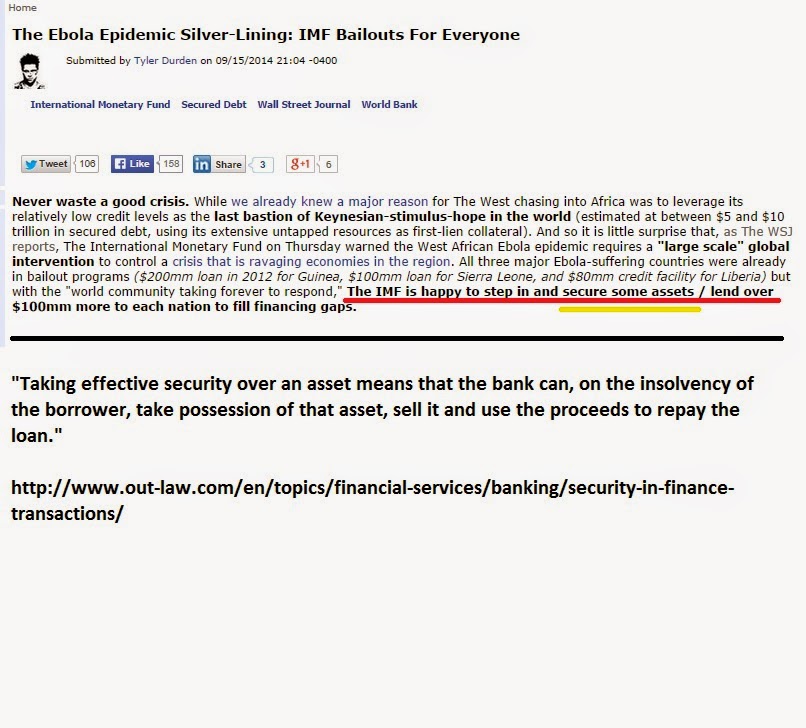 
Oh and I went and did a little bit of research last week on just what sort of "assets" Sierra Leone, Guinea, and Liberia happen to have.   The list is actually quite extensive, but the biggies that stick out like a great big shining beacon of "take me, I'm yours":  Gold, Oil, Diamonds, and Iron ore..... 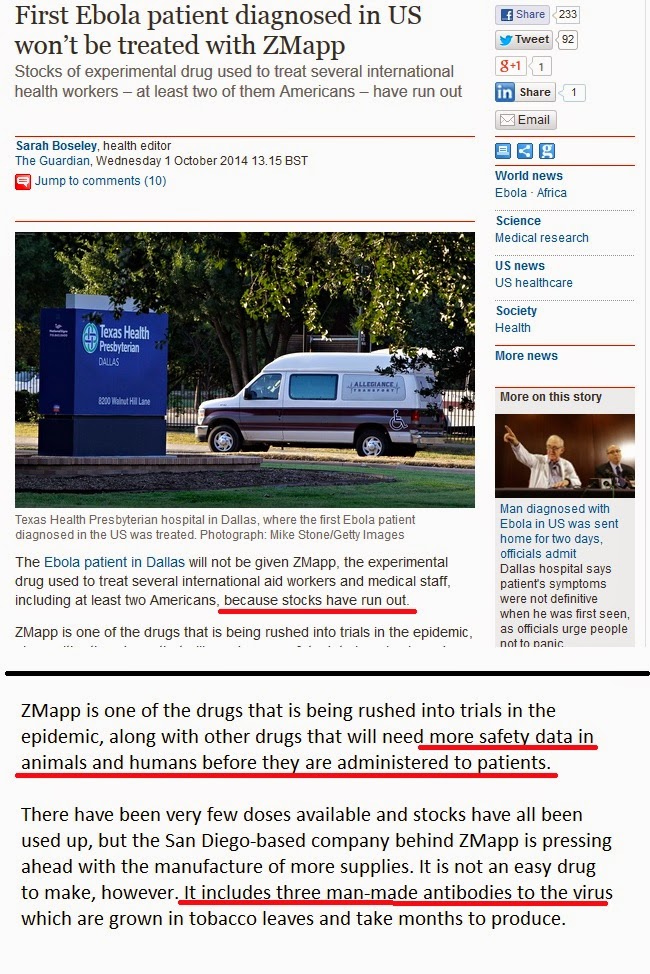 First Ebola patient diagnosed in US won’t be treated with ZMapp
Stocks of experimental drug used to treat several international health workers – at least two of them Americans – have run out
The Ebola patient in Dallas will not be given ZMapp, the experimental drug used to treat several international aid workers and medical staff, including at least two Americans, because stocks have run out.
ZMapp is one of the drugs that is being rushed into trials in the epidemic, along with other drugs that will need more safety data in animals and humans before they are administered to patients.
There have been very few doses available and stocks have all been used up, but the San Diego-based company behind ZMapp is pressing ahead with the manufacture of more supplies. It is not an easy drug to make, however. It includes three man-made antibodies to the virus which are grown in tobacco leaves and take months to produce..... 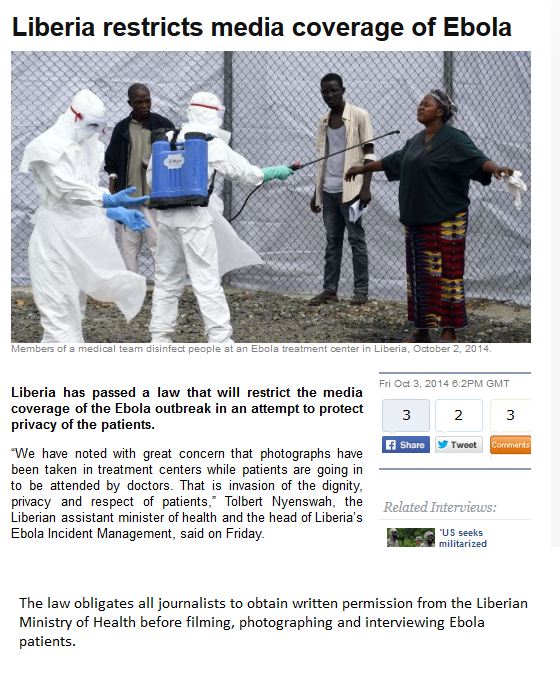 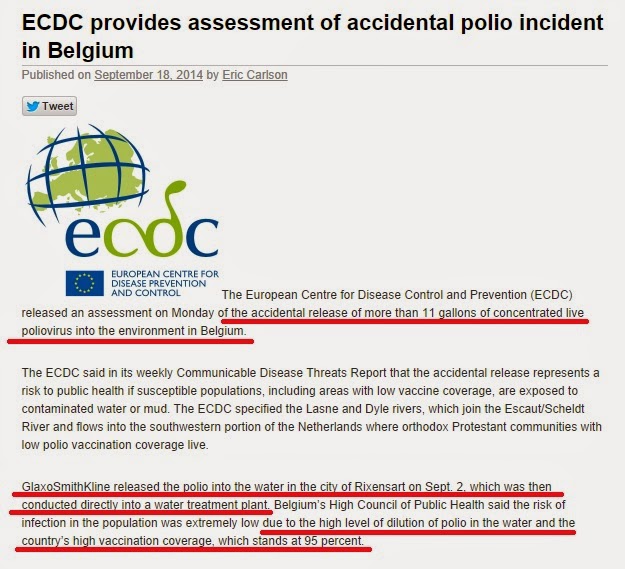 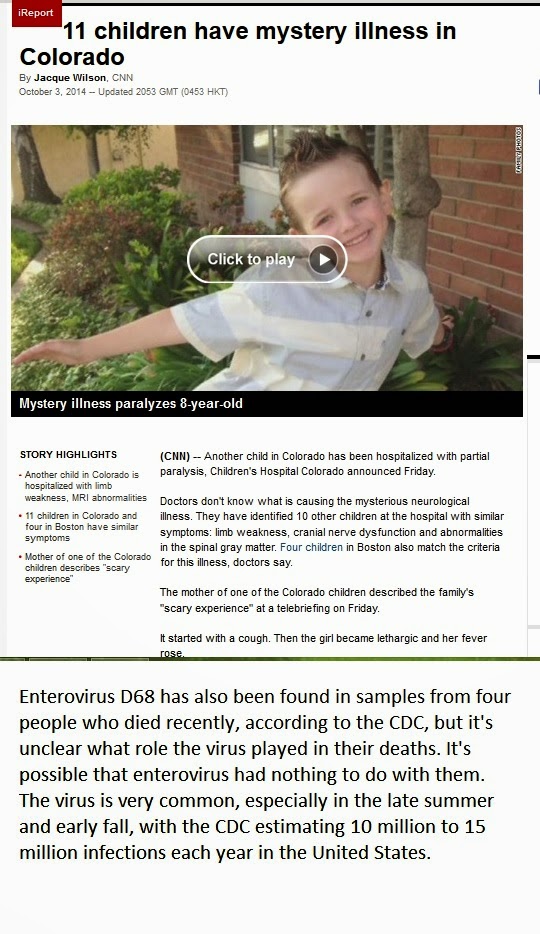 11 children have mystery illness in Colorado

Doctors don't know what is causing the mysterious neurological illness. They have identified 10 other children at the hospital with similar symptoms: limb weakness, cranial nerve dysfunction and abnormalities in the spinal gray matter. Four children in Boston also match the criteria for this illness, doctors say....
...Enterovirus D68 has also been found in samples from four people who died recently, according to the CDC, but it's unclear what role the virus played in their deaths. It's possible that enterovirus had nothing to do with them. The virus is very common, especially in the late summer and early fall, with the CDC estimating 10 million to 15 million infections each year in the United States.


And in other news, Janet Yellen showed her true colours a little while ago in a speech (pre-recorded I might add) to the commoners of the US- aka: America's Poor people.

Tyler at ZeroHedge worded it oh so well. 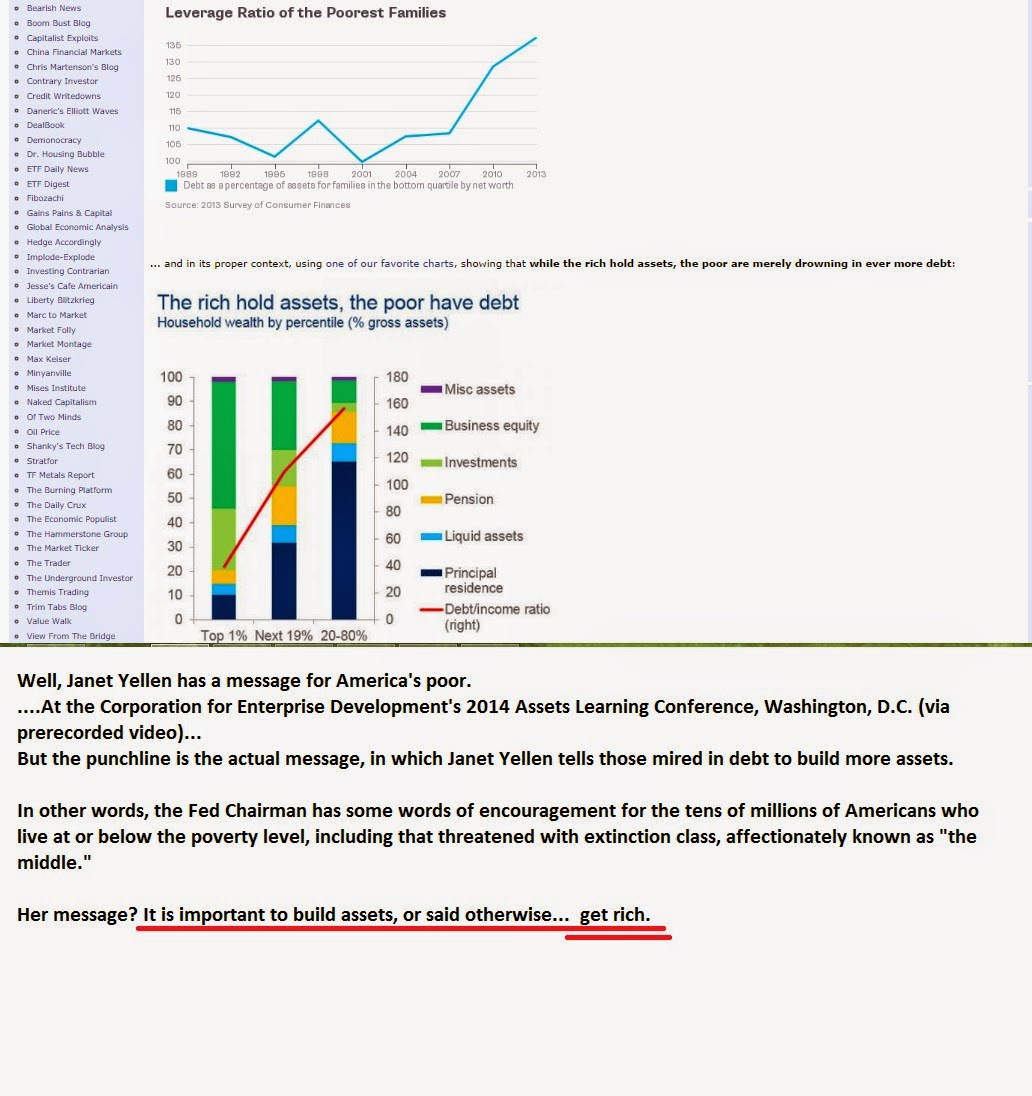 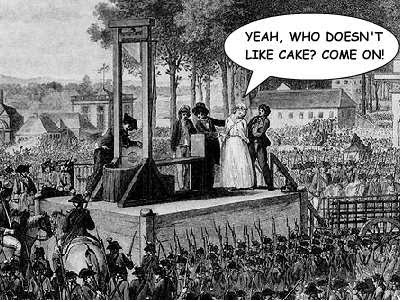 And to end our show on a lighter note, Miley Cyrus is in serious trouble with the Mexican authorities for twerking on their national flag.

Miley Cyrus is in trouble in Mexico, after “desecrating” its flag during a performance in Monterrey.
A Mexican state legislature has called for the singer to be fined, after one of her dancers spanked her (prosthetic) backside using the Mexican flag, while she was on stage in the northern state of Nuevo León on Mexican Independence Day