China's "Ring of Life" - beautiful but what is it?

Early this morning I finally had some quiet time to sit back and catch up on some reading and what has been posted on the WWW over the past few days.  This really caught my eye on enerchi's Ascension with Earth site:

"This 157 meter high building named "Ring of Life" cost around a hundred million RMB ($16 million USD) and used 3,000 tons of steel, but is it really a piece of architecture or are China expecting some visitors?"

Searching  "Chinese ring of life" brings all sorts of photos of the beautiful structure, which really does look out of place surrounded by ugly concrete block buildings: and articles calling it a useless structure

THIS article from China says:


The name "Ring of Life" means a round sky and a path leading to a paradise in heaven, said an article on the official website of the Fushun Municipal Government.
In response to some critics who say the building is not practical, Xia Hongjun, a senior local official in Fushun, said "Ring of Life" is designed as landscape architecture and four elevators will be installed for sightseeing.
Officials with the Urban Construction Bureau of Fushun explained they gave up on creating entertainment projects because the local population is too small. Thus, the landmark building is only for sightseeing.


"four elevators will be installed..."   WILL be installed?  Granted, maybe they do things differently in China, but in every building I've ever seen constructed here (and my family is in construction) the elevator is an integral to the construction process.  Just sayin'

I have no idea what this very elegant ring's real purpose is, but given the fact that it's not the first bizarre structure that has been built in China, you have to wonder what's going on.

We have very weird structures in the Gobi desert:


Why Is China Building These Gigantic Structures In the Middle of the Desert?


This is crazy. New photos have appeared in Google Maps showing unidentified titanic structures in the middle of the Chinese desert. The first one is an intricate network of what appears to be huge metallic stripes. Is this a military experiment?
Update 1 & 2: readers are finding even more weird stuff.
Update 3: some unidentified agency, company or person has been ordering hundreds of photographs of this area since 2004. Check out that story here.
They seem to be wide lines drawn with some white material. Or maybe the dust have been dug by machinery.
It's located in Dunhuang, Jiuquan, Gansu, north of the Shule River, which crosses the Tibetan Plateau to the west into the Kumtag Desert. It covers an area approximately one mile long by more than 3,000 feet wide.
The tracks are perfectly executed, and they seem to be designed to be seen from orbit.
Perhaps it's some kind of targeting or calibrating grid for Chinese spy satellites? Maybe it's a QR code for aliens? Nobody really knows.
You can check it out yourself in Google Maps here.
Read the entire article HERE

And the National Theatre in Beijing : 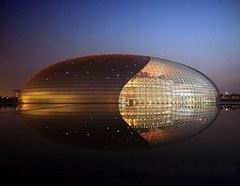 The National Grand Theatre, also known as Beijing National Center for the Performing Arts (Chinese Name : 国家大剧院), surround by artificial lake, the spectacular glass and the titanium egg-shaped Opera House, designed by French architect Paul Andreu, Its seats 5,452 people in theatres: the middle is Opera house, the east is Concert hall, and the west is Drama theatre.
The dome measures 212 meters in east-west direction, 144 meters in north-south direction, and is 46 meters high. The main entrance is at the north side. Guests arrive in the building after walking through a hallway that goes underneath the lake.


I have theories about China..... but they're only theories and the one person who might know keeps side stepping the questions, lol, so for now I guess they remain just unproven theories.