Pope Benedict is leaving the papacy because....


ITCCS : Why the Pope retired For Real : Kevin Annett : European Governance issued an arrest warrant : and Closure and seizure of Vatican assetts : Here are all the notices and dates :

Historic, Breaking News: Wednesday, February 12/13, 2013
Pope Benedict resigned to avoid arrest, seizure of church wealth by Easter -Diplomatic Note was issued to Vatican just prior to his resignation
New Pope and Catholic clergy face indictment and arrest as “Easter Reclamation” plan continues
A Global Media Release and Statement from The International Tribunal into Crimes of Church and State (ITCCS)
Brussels:
The historically unprecedented resignation of Joseph Ratzinger as Pope this week was compelled by an upcoming action by a European government to issue an arrest warrant against Ratzinger and a public lien against Vatican property and assets by Easter.
The ITCCS Central Office in Brussels is compelled by Pope Benedict’s sudden abdication to disclose the following details:
1. On Friday, February 1, 2013, on the basis of evidence supplied by our affiliated Common Law Court of Justice (itccs.org), our Office concluded an agreement with representatives of a European nation and its courts to secure an arrest warrant against Joseph Ratzinger, aka Pope Benedict, for crimes against humanity and ordering a criminal conspiracy.
2. This arrest warrant was to be delivered to the office of the “Holy See” in Rome on Friday, February 15, 2013. It allowed the nation in question to detain Ratzinger as a suspect in a crime if he entered its sovereign territory.
3. A diplomatic note was issued by the said nation’s government to the Vatican’s Secretary of State, Cardinal Tarcisio Bertone, on Monday, February 4, 2013, informing Bertone of the impending arrest warrant and inviting his office to comply. No reply to this note was received from Cardinal Bertone or his office; but six days later, Pope Benedict resigned.
4. The agreement between our Tribunal and the said nation included a second provision to issue a commercial lien through that nation’s courts against the property and wealth of the Roman Catholic churchcommencing on Easter Sunday, March 31, 2013. This lien was to be accompanied by a public and global “Easter Reclamation Campaign” whereby Catholic church property was to be occupied and claimed by citizens as public assets forfeited under international law and the Rome Statute of the International Criminal Court.
5. It is the decision of our Tribunal and the said nation’s government to proceed with the arrest of Joseph Ratzinger upon his vacating the office of the Roman Pontiff on a charge of crimes against humanity and criminal conspiracy.
6. It is our further decision to proceed as well with the indictment and arrest of Joseph Ratzinger’s successor as Pope on the same charges; and to enforce the commercial lien and “Easter Reclamation Campaign” against the Roman Catholic church, as planned.
In closing, our Tribunal acknowledges that Pope Benedict’s complicity in criminal activities of the Vatican Bank (IOR) was compelling his eventual dismissal by the highest officials of the Vatican. But according to our sources, Secretary of State Tarcisio Bertone forced Joseph Ratzinger’s resignation immediately, and in direct response to the diplomatic note concerning the arrest warrant that was issued to him by the said nation’s government on February 4, 2013.
We call upon all citizens and governments to assist our efforts to legally and directly disestablish the Vatican, Inc. and arrest its chief officers and clergy who are complicit in crimes against humanity and the ongoing criminal conspiracy to aid and protect child torture and trafficking.
Further bulletins on the events of the Easter Reclamation Campaign will be issued by our Office this week.Issued 13 February, 201312:00 am GMTby the Brussels Central Office, 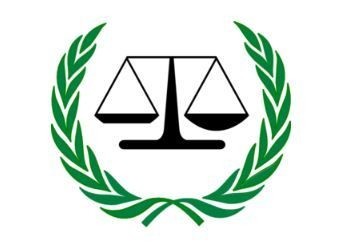 The International Tribunal into Crimes of Church and State

Pope Benedict XVI 'knew more about clergy sex crimes than anyone else in church yet did little to protect children', say critics 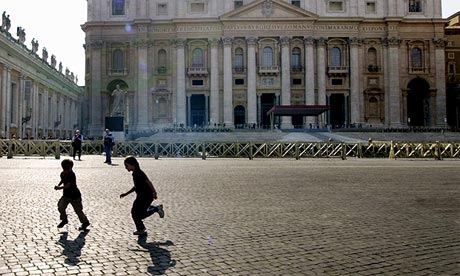 Children play in St Peters' Square at the Vatican. Benedict, then Cardinal Ratzinger, was in charge of investigating sex abuse scandals but critics say he covered up paedophilia. Photograph: Gregorio Borgia/ AP
For the legions of people whose childhoods and adult lives were wrecked by sexual and physical abuse at the hands of the Roman Catholic clergy, Pope Benedict XVI is an unloved pontiff who will not be missed.
Victims of the epidemic of sex- and child-abuse scandals that erupted under Benedict's papacy reacted bitterly to his resignation, either charging the outgoing pontiff with being directly complicit in a criminal conspiracy to cover up the thousands of paedophilia cases that have come to light over the past three years, or with failing to stand up to reactionary elements in the church resolved to keep the scandals under wraps.
From Benedict's native Germany to the USA, abuse victims and campaigners criticised an eight-year papacy that struggled to cope with the flood of disclosures of crimes and abuse rampant for decades within the church. Matthias Katsch, of the NetworkB group of German clerical-abuse victims, said: "The rule of law is more important than a new pope."
Norbert Denef, 64, from the Baltic coast of north Germany, was abused as a boy by his local priest for six years. In 2003, Denef took his case to the bishop of Magdeburg. He was offered €25,000 (then £17,000) in return for a signed pledge of silence about what he suffered as a six-year-old boy. He then raised the issue with the Vatican and received a letter that said Pope John Paul II would pray for him so that Denef could forgive his molester.
"We won't miss this pope," said Denef. He likened the Vatican's treatment of the molestation disclosures to "mafia-style organised crime rings".
That view was echoed by David Clohessy in the US, executive director ofSNAP (Survivors' Network of those Abused by Priests), an organisation with 12,000 members: "His record is terrible. Before he became pope, his predecessor put him in charge of the abuse crisis.
"He has read thousands of pages of reports of the abuse cases from across the world. He knows more about clergy sex crimes and cover-ups than anyone else in the church yet he has done precious little to protect children."
Jakob Purkarthofer, of Austria's Platform for Victims of Church Violence, said: "Ratzinger was part of the system and co-responsible for these crimes.".....
http://www.guardian.co.uk/world/2013/feb/11/pope-complicit-child-abuse-say-victims

Was Pope Benedict fired by the Knights of Malta?

Share on facebookShare on linkedinShare on twitterShare on emailMore Sharing Services

Popes don’t resign. They get fired

The Vatican has sidestepped EU banking rules by turning to a Swiss company to restore card payments in its museums after they were suspended over concerns that the city-state was not doing enough to prevent money laundering.
Vatican spokesman Federico Lombardi said Swiss card payment specialist Aduno had been contracted to provide the service, blocked for the last six weeks.
"Credit card payments in the state of the Vatican City are working again, and so pilgrims as well as tourists who visit the church of St. Peter's every day can now use the ordinary payment service, including paying for the Vatican museums," Lombardi told reporters.
The Italian central bank prevented long-standing provider Deutsche Bank (DB) from continuing to offer payment services since the start of 2013.
The Bank of Italy said it was not required to approve the new arrangement because Aduno was not based in the European Union.
In a statement explaining its decision last month, it said EU law prevented EU banks from operating in non-EU states unless they had an adequate supervisory system or were deemed "equivalent" for anti-money laundering purposes. The Vatican failed on both counts, it said. 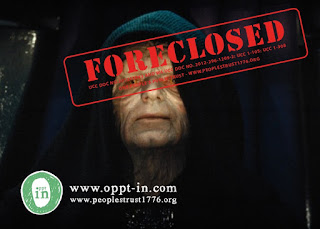 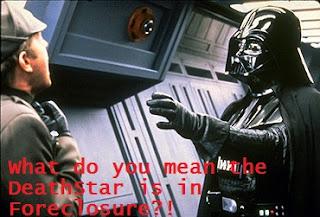