The 911 Truth, or how to create a police state

The Granddaddy of all crimes against humanity happened on September 11th, 2001. The Official Story of Al Qaeda terrorists hijacking planes and deliberately crashing them into the World Trade Centre and Pentagon have been so thoroughly debunked that it's almost laughable that the American Government keeps banging on the pulpit shouting "It IS true damn it!!! You have to listen to your government!!!"... or it would be if the truth behind 911 wasn't so horrifying.

I'm not going to get into all the knitty gritty of details and theories- I will post links for you to research and I will post a couple of videos here that go into the fine details that shine a light on the greatest act of domestic and international terrorism ever seen. The various "truther" websites contain many theories about what actually happened on 911- suffice to say, they all agree that it has NOTHING to do with the official American government story.

The very first video that I always tell people to watch is the movie "Loose Change".  In my opinion this is one of the very best movies out there to act as a spring board to do your own research.


The next video I will post here is a short documentary by Architects & Engineers for 9/11 Truth.  This 15 minute video shows that the "collapse" of building 7 to be completely impossible without being an implosion demolition.


" AE911Truth's new 9/11 documentary Solving the Mystery, the destruction of World Trade Center Building #7, WTC 7 on 9/11/01. Join actor, Ed Asner and Architect Richard Gage, AIA and Architects and Engineers as they narrate an unfolding story that decimates the official account ("collapse due to normal office fires") of this 47 story high-rise which was destroyed on the afternoon of 9/11 in record time: top to bottom in under 7 seconds - and at free-fall acceleration for a third of its fall. Solving the Mystery of the Free-Fall Collapse of WTC 7. "

So, the whole "Official Story" is a complete pack of lies.  Nuff said.  But that's not the point of this article. Tens of millions of Americans have woken up to this truth, and polls show that every year fewer and fewer people believe that the American government is telling them the truth about 911. This is fantastic but leads to the question that I have found most of these unbelievers haven't asked themselves:  "WHY?"  While millions of people don't believe the lies of the official story, most of them haven't yet connected the dots.  And THATs what this article is about.

The short answer is:

On the money topic, watch Loose change (above)- as they explain about the insurance policies that were taken out by the owners of the World Trade Centers just days before 9/11, and the fact that billions of dollars worth of gold went missing.

The "Official Story" tells us that the terrorists are coming to get us, and no one is safe.  THIS is the beginning of the end of the  "Land of the Free and the Home of the Brave".  In a nut shell:  The destruction of the WTC and part of the Pentagon were done to create FEAR & PANIC.  This in turn allowed the American government to wage wars in Afghanistan, Iraq, and Libya, and the killings of tens of thousands (if not more) of human beings.

I'm not even going to get into the issues of  Oil, the Israeli connection, and power in the Middle East- if I did this would end up being a book- so consider that to be your homework/research assignment for tomorrow, if you're so inclined.

Wars make money. HUGE amounts of money.  Oh, not for the taxpayers, but for the big boys who own the war machines that power the conflicts. I have a  w h o l e  other article that I will write on that topic later on, but suffice to say:  Wars make a few men very very wealthy.

So, that leaves us with "Power" & "Control"  This is what I want to talk about, and I'm going to try to keep it short and to the point. The 911 disaster is responsible for taking away more of the American peoples Freedoms and Rights than any other incident in the history of America.  And THAT is the main reason for what happened on September 11th, 2001.  Using the excuse of "terrorism", and the emotion of "Fear", the government has done everything in it's power to strip the citizens of the United States of almost every single outlet to voice their opinion and stand up for themselves.  And America has just laid down and let these evil men do it- which is EXACTLY what the NWO/shadow government planned.  Here are just a few:

- The NDAA act now gives the US Government the power to detain any American indefinitely without trial.
- Various bills to give the government the ability to pull the plug on the internet- which is the number one way that information is being made available to the people of the world
-Creation of FEMA camps- massive prison complexes all over the US. Just go to www.infowars.com and search "FEMA camps" for more information
- FBI and Homeland Security creates a list of suspicious activities that might  indicate a person is a "Terrorist"- list includes things like having more than 7 days food on hand, homeschooling, and owning a firearm or hunting and camping equipment. Yes, I'm very serious- go look it up!!
- And of course the new H.R. 347 bill that basically says you can't protest outside of an official building (ie: The White House) or in the vicinity of an important person- so basically, a bill that says they can arrest any political protester any time they want.

The United States of America is now, officially, a Police State. CONTROL & POWER.

These men have been working for over 200 years (well, not them personally, obviously, but their families and groups) to build up to this moment in time.  The Illuminatti/NWO have created a massive dark hole in which almost all of the worlds wealth has been sucked into, and at the same time they've taken away as much power from the people as they possibly can.  This has been their plan from the beginning: to destroy the worlds economy, bringing the world to its knees through bankruptcy, war, environmental terrorism, and pharmaceutical terrorism.  Leaving them with all the Money, All the Power, All the Control.

...and they almost got away with it too.  But they are being stopped- right now. In the US and all over the world, these vile creatures are being rounded up by groups of brave men and women who have banded together with a unique group of friends to bring down the Dark Cabal.  Be happy my friends, the world is about to get a whole lot brighter without the soul sucking scumbags draining us of every penny and every happy thought.  As I said yesterday in my article "Taking off the blindfold", we are about to enter a new era of peace and prosperity.  The road might not be completely smooth, as the Dark Cabal is not going to just give up quietly, but the road will not be long. Very soon we will know true freedom, and the very deepest secrets of our history will be open for us to hear for the first time- without the bias of those that have an agenda in opposition to the freedom of humanity.

While many people are angry- and will be angrier still when the full truth comes out- we need to remain focused on the positive and not dwell on the anger.  It is through these positive thoughts and emotions that we are overcoming and winning this battle.   Remember the wise words of Master Yoda:


“Fear is the path to the dark side. Fear leads to anger. Anger leads to hate. Hate leads to suffering.”

To leave you on a positive note:

Tomorrows topic will be about some of the special help we're getting to win this war against the Illuminatti/NWO/Dark Cabal.  I'm pretty sure that you'll all find it very very interesting!


For more information about the Truth of 9/11, here are a list of links to various sites that have been compiling evidence for years. 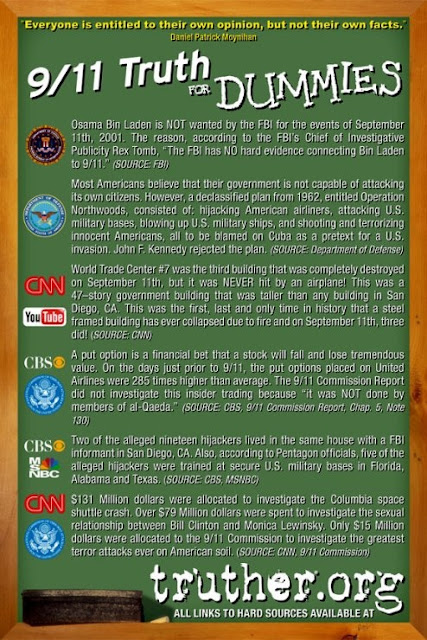